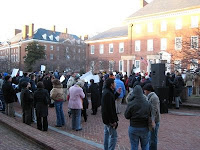 On a balmy February 2, a crowd estimated by the Washington Blade to be 250 assembled at Lawyers Mall in Annapolis for a rally during Equality Maryland’s annual Lobby Day event. This compares unfavorably to the previous years when, according to Equality Maryland’s figures, approximately 500 attended in 2008 and nearly 1,000 did so in 2007.
What’s going on?
There are a number of factors that may have contributed to the paltry attendance. For one thing, Equality Maryland’s legislative agenda is not as ambitious as in previous sessions.
Realizing that same-sex marriage cannot pass during this session, there will not be a full-throated push for the legislation.
Instead, the goal is to work with legislators to increase sponsorship of the Religious Freedom and Civil Marriage Protection Act this year, according to statements made by new Equality Maryland Executive Director Kate Runyon. In addition, the organization will be pursuing once again passage of the Gender Identity and Expression Anti-Discrimination Act as well as other initiatives.
Another factor could be a general decline of interest. Following the Maryland Court of Appeals ruling, which upheld the state’s law that restricted marriage to be between one man and one woman, there was plenty of anger to go around and fire up the LGBT community as well as allies.
But lack of leadership from Governor Martin O’Malley on this issue and opposition by the powerful Senate President Thomas V. Mike Miller may have dampened the spirits of many gay and lesbian couples. These couples may be of the mindset that it’s a lost cause for now.
Another factor for the disappointing crowd is the prevailing lack of interest in these issues and politics in general on the part of large segments of the LGBT community. There are approximately 15,000 same-sex couples throughout the state. Add to that the tens of thousands of unattached folks, family members and other straight allies. All told, this is a significant number of people to be reckoned with. And with the media present, it would have made a great picture of the mall jammed full of LGBT activists.
But they didn’t show up. As is the case in previous Lobby Day rallies, Baltimore City, which comprises the largest number of LGBT people in Maryland, was woefully underrepresented. The areas of Charles Village, Bolton Hill and Mount Vernon—strong gay population centers—never seem to turn out in large numbers. In fact, the majority of Lobby Day attendees hail from Montgomery, Prince George’s and Howard Counties.
One would think that the devastating passage of Proposition 8 in California would spur on more people to rally and meet with their respective delegates and senators. Apparently that did not happen in Annapolis this year—at least not with the numbers that would impress those persuadable legislators.
Weather cannot be used as an excuse this time around; the temperature was in the 50’s—fully 30 degrees warmer than at last year’s bone-chilling Lobby Day.
Immediately following the Prop 8 debacle, nearly a thousand people, mostly from the Baltimore area, managed to gather outside City Hall on five days notice in November to express their displeasure at Prop 8 as part of a national Join the Impact movement. There was a lot of passion at that event.
True, it was a Saturday as opposed to Lobby Day being on a Monday—a work day for most—but still. It only took five days by the organizers using Internet social networking sites to pull off such a huge crowd. Did Equality Maryland tap into the Join the Impact network?
Equality Maryland is not solely to blame for the lack of turnout at Lobby Day. The director is new but capable. The organization dutifully publicized the event in area LGBT papers, but it’s not their fault if people aren’t reading them.
There seems to be a persistent lack of involvement and leadership from certain Baltimore-based LGBT organizations to get the people out. Imagine if even a small percentage of Pride-goers turned up at Annapolis. Imagine the impression that would make on legislators that this community is vast and they care. The lawmakers may pay more attention.
Clearly, Equality Maryland will have to recognize that there are varying degrees of interest within the community and that stronger efforts are needed to spark more enthusiasm. Attempts to obtain a comment from Equality Maryland’s Kate Runyon were unsuccessful.
Those who did attend enjoyed the speech made by Bishop Gene Robinson. But there was criticism levied at the speakers’ not being visible because there was no riser or stage. And the sound system was not up to par.
Logistical issues have plagued Lobby Day rallies in the past and may have tamped down attendance. These are technical glitches that can easily be fixed in the future.
Following the rally, the attendees split up to visit and meet with their respective legislators. Some of these delegates and senators were welcoming, supportive and courteous. Others were plainly rude or ignorant, or they simply declined to meet with their constituents.
When people tell their personal stories to lawmakers and relate how the lack of protections affect LGBT families, it can be productive in educating these officials.
And a large crowd on the mall will signal a strong determination to succeed. Let’s hope we can get that passion back.
Steve Charing at 12:55 AM