Stylish ‘Kinky Boots’ is a Good Fit at Toby’s

If you are looking to attend a musical with an abundance of heart, a triumph of the soul and elite-level performances, then come to Toby’s, the Dinner Theatre of Columbia and enjoy the exhilarating experience of Kinky Boots.  Under the impeccable direction of Helen Hayes Award winner Mark Minnick who also co-choreographed the splashy musical with David Singleton, this production is a sure-fire escape from the day’s weighty matters.

Kinky Boots with music and lyrics by pop music icon Cyndi Lauper and book by Harvey Fierstein topped the 2013 field by receiving 6 Tony Awards including Best Musical among 13 nominations.  Ms. Lauper, in her composing debut for the stage, was the first woman alone to receive the honor for Best Score.

In my view, Kinky Boots is one of the top ten LGBTQ-related Broadway musicals or plays of all time.

Based on the 2005 film Kinky Boots, which was inspired by a true story, the musical tells of a near-bankrupt British shoe factory’s owner, Charlie (Matt Hirsh) who had inherited the business from his father.  He forms an unlikely partnership with a drag queen named Lola (DeCarlo Raspberry) to save the business. Charlie develops a plan to address the “underserved niche market” by producing custom footwear for drag queens to support a man’s weight, rather than the men’s dress shoes that his firm is known for. In the process, he and Lola bond and discover that they have a lot more in common than originally thought.  #hocoarts

Mr. Fierstein, in penning the book, brings to the fore an impressive body of work where he has written about or performed as a drag queen (Torch Song Trilogy, La Cage Aux Folles, Hairspray).  And like these others, Kinky Boots excels in its touching, uplifting message with a strong infusion of humanity. Its overarching themes, such as “Just Be,” center on parental expectations, battling prejudice and stereotypes, and the need for open-mindedness.

With the setting in an economically struggling British factory town, Kinky Boots is similar to other Broadway musicals like Billy Elliot the Musical and The Full Monty.

Guided by Mr. Minnick, Kinky Boots is a vibrant, pastel-laden spectacle that will entertain you and simultaneously warm your heart.   Profoundly superb staging, costuming, sound, lighting, and musical direction are blended with near perfection to augment the talented cast. 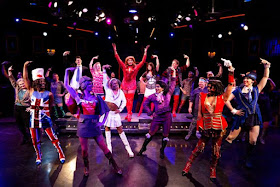 Mr. Minnick and Mr. Singleton are adroit in choreographing big splashy production numbers with large groups performing flawlessly within the confines of Toby’s in-the-round stage. These performances add tons of energy to the already electric show. Credit Nathan Scavilla’s six-piece orchestra (he alternates with Ross Scott Rawlings and Greg Knauf) for providing good balance in support of the numbers.

Ms. Lauper’s “Sex is in the Heel” in the first act is a show stopper in its own right; “Everybody Say Yeah,” a stirring song that brings down the act’s curtain, matches it.  The second act’s “In This Corner,” a well-staged boxing scene and a pivotal part of the storyline, also shines.

Sturdy Matt Hirsh, an increasingly proficient artist in recent Toby’s productions, turns in another scintillating performance as Charlie who clumsily attempts to save the factory, manages his skeptical workers, balancing his desire to save the factory with his romantic life and overcoming his initial resistance to Lola’s world to eventually see the light.

This is a demanding role, and Mr. Hirsh, a Helen Hayes Award winner, rises to the occasion by displaying exceptional acting skills and vocal prowess.  The latter is on display in the snappy song “Step One”—whereby Charlie invites Lola to the factory to design a boot for that underserved niche market—and in particular, the moving “Soul of a Man” as he copes with the legacy of his father. He hits those challenging big notes out of the park.

In a tour de force, DeCarlo Raspberry sparkles as the drag queen headliner Lola and should be a serious contender for a Helen Hayes Award.  Summoning up his cache of potent acting skills, Mr. Raspberry convincingly displays a wide range of emotions from high camp to melancholy.

His powerful voice does justice to the beautiful score in “The Land of Lola” where he performs with his excellent backup troupe of drag dancers, the Angels, and the tender ballad “Hold Me in Your Heart,” which he sings to his wheelchair-bound father, Simon, Sr. (Ryan Holmes), who did not approve of his son’s world.

But the most moving of all, “Not My Father’s Son,” in which Mr. Raspberry ultimately forms a duet with Mr. Hirsh, is my favorite.  Though they tried to be like their fathers, Lola (given name was Simon) and Charlie felt the sting from their falling short of their fathers’ expectations. That formed the bonding of the two disparate men.  The stunningly emotional lyrics resonate with all those who felt they let their parents down in some way but were determined to live their lives for themselves:

“So I jumped in my dreams and found an escape
maybe I went to extremes of leather and lace,
but the world seems brighter six inches off the ground
and the air seemed lighter
I was profound and I felt so proud
just to live out loud.”

The entire ensemble is excellent in support of the leads.  Most notable among them include Russell Sunday as Don, a boorish, testosterone-oozing antagonist to Lola and Jana Bernard as Lauren, also a factory worker and potential love interest for Charlie.   If anyone may have forgotten that Cyndi Lauper had composed the songs, Ms. Bernard’s well executed performance in “The History of Wrong Guys” would be a good reminder. 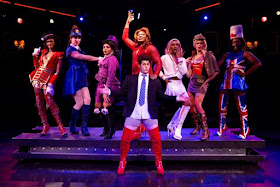 The talented members of the Ensemble who were not previously mentioned and play the factory workers consist of Heather Beck, Noah Beye, David Bosley-Reynolds, Samantha Deininger, Ryan Holmes, Shane Lowry, and Dustin Perrot.

And then there are the Angels. Their singing talents and energetic dancing add much flair to the production working their boots off. Applause goes to Randyn Fullard, Michael Mattocks, Quadry Brown (substituting for Ariel Messeca the evening this performance was reviewed), Solomon Parker, David Singleton and Mark Sullivan.

There are numerous set pieces and props that are efficiently moved on and off the stage as the scenes change adding to the solid staging of this production. Scenic and Lighting Designer David A. Hopkins ringed the theater with colorful stained glass panels adding color to the aesthetics and splashed the stage with a palette of rich hues and spotlights throughout.

Costume Designer Janine Sunday fitted Mr. Raspberry in colorful satiny gowns and the Angels in a variety of bright colorful costumes highlighted by those gorgeous boots!  She also ably designed the costumes for the blue collar factory workers, adding more reality to the staging.

You will get a kick out of Kinky Boots.  The music, the storyline, and the uplifting message provide persuasive reasons alone to buy tickets to the show. Add that to the exceptional cast, orchestration and crew at Toby’s and you have a winner deserving of a raucous standing ovation. Plus there is the delicious buffet to boot.

Running time: Two hours and 50 minutes with an intermission.