Neither side is giving an inch during the impasse. 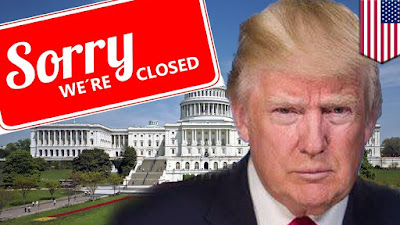 Earlier this month I opined  that the government shutdown orchestrated by President Trump would be a losing bet politically similar to his other bad choices he’s made throughout his gilded life.  At the time, though, I believed the shutdown would be short-lived because of this political risk he’s taking.

Following the much ballyhooed and delayed “major address” on border security on january 20, it is clear that both sides have not budged much.  Trump continues to offer up nothing new in a “deal”  and, alas, never mentioned the plight of the over 800,000 federal workers (plus contractors) furloughed or being forced to work without pay, the impact of the shutdown on their families and local businesses as well as the hit the overall economy is taking the longer this goes on.

The delivery of his speech resembled a hostage video, and like most of his addresses, it was devoid of sincerity and empathy—and facts.  The proposal that minors can apply for asylum in the very country his or her parents are fleeing for their lives, is laughable if he had meant it as a joke. He didn’t.

In short, Trump’s address was like a Broadway musical opening without an orchestra. And rightly so, it was panned by the critics.

Democratic leaders labeled his proposals as non-starters.  The government must open first before negotiations on how best border security should be implemented can begin in earnest. If he refuses to end the shutdown impasse, shutdowns could be used down the road when other squabbles emerge and again federal employees would be used as pawns.

Even Ann Coulter, one of a handful of right wing hard line commentators who are seemingly devising policy for the president, criticized some of his proposals as they pertain to the Dreamers and those affected by Temporary Protected Status as too soft and leading to that dreaded “amnesty.” 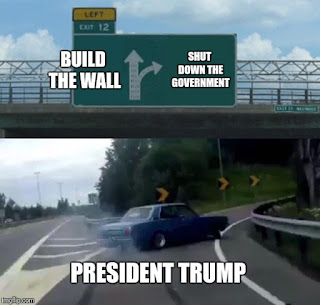 Sure, Trump can say he put “reasonable” and “common sense” proposals on the table and, therefore, Democrats will now assume the mantle of the shutdown if they don’t give in on his border wall or barrier or whatever.

That strategy didn’t work.  He’s boxed in. Polls are against him. He’s a terrible negotiator. Trump’s rabidly anti-immigrant base needs to be mollified. So, what can he do?

Earlier in the month he threatened to declare a national emergency along the border in which Department of Defense funds could be diverted to build the wall.  He bragged that he has the “absolute right” to do so but has been reluctant to take that step.

The main problem with this, assuming a national emergency can indeed be established and aside from the fact Congress has the power of the purse, is the precedent it would set for future Democratic presidents.

But it seems to be the only exit ramp short of a cave-in by either side who are emboldened by their respective bases. He should punt his way out of this, re-open the federal government and let the courts decide its legality.

Trump can tell his base that he tried his level best to acquire funding for a wall but the obstructionist Democrats will not give in. He desperately needs that base because, well, that’s all he has.

Democrats can say that Trump is employing outlandish tactics to fund a medieval Trump Wall vanity project and indeed, precedent will have been set.

It’s an unseemly prospect but as of now, it’s the only exit ramp in view.

Posted by Steve Charing at 10:29 AM No comments: 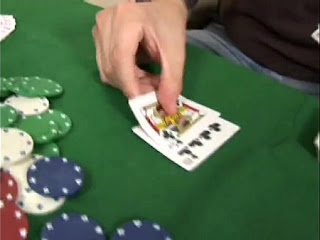 Posted by Steve Charing at 1:40 AM No comments: