Do We Really Have that Much Political Clout?

By Steve Charing
As the Maryland Court of Appeals squashed any immediate hopes for same-sex marriage here, the reasoning they used have caused legal experts and gay activists to scratch their heads.
Personally, I cannot fathom how such well-educated and respected individuals can be so ignorant, but they sure demonstrated that in the majority opinion.
To be fair, these arguments weren’t totally the Court’s fault; they were included in the state’s briefs and echoed at the proceeding last December when the oral arguments were presented that at times led to quiet sneers by the dismayed lgbt contingent in the courtroom. But the four judges who constituted the fateful majority bought them, with minimal questioning, and that is astounding.
One of these was that marriage should only be between a man and a woman for procreation purposes. They conveniently skipped over the fact that elderly people who decide to marry as well as couples who cannot have children either by choice or for biological reasons hold valid marriage licenses.
Then there is also the near-comical argument that marriage is a good option for those who "accidentally" procreate. Accidents do happen in the home, without question. People fall off ladders, trip down stairs, etc. They even accidentally set off fires. But one person landing on top of another by accident and penetrating to the point of conception is an accident that may not appear in many home safety brochures.
But the one argument that is most troublesome is the assumption that the gay and lesbian community has sufficient political power to remedy any ills, and therefore, is not a suspect class.
But are we that powerful? Let’s take a look.
If we are so powerful, why did we have to sue to be able to legally marry and receive the benefits, rights and responsibilities that heterosexual couples take for granted?
If we are so powerful, how was it that former Governor Ehrlich was able to veto a fair-minded medical decision-making legislation without much protest from our legislative representatives who had voted for it?
If we are so powerful, how did Governor O’Malley backtrack so easily on his original support for same-sex marriage and smacked us in the face by bringing up religion knowing that the plaintiffs were seeking civil marriage rights?
If we are so powerful, how is it that non-citizens, felons, drug abusers and sub-intelligent individuals are allowed to serve openly in the military, but gays and lesbians may not?
If we are so powerful why is it that criminals, drug abusers and adulterers may participate with aplomb in the world of sports and make tons of money from it, but an openly gay athlete would likely be shunned by teammates, fans and potential corporate sponsors?
If we are so powerful, why can murderers, rapists, arsonists, child molesters, drug dealers and bank robbers get to marry anyone they choose, but gays and lesbians can only do so in one state out of fifty?
If we are so powerful, how come only one state out of all those that tried managed to defeat a constitutional amendment that would ban same-sex marriage?
If we are so powerful, why can’t a Federal law outlawing discrimination based on sexual orientation sail through Congress without a threat of a presidential veto?
And, if we are so powerful, why cannot a gay man or a lesbian hold his or her partner’s hand while walking down the street without fear of someone pounding the back of the head with a baseball bat?
As you can see, the justices on the Court of Appeals failed to ask the state’s attorney these very questions.
There is no doubt we have made substantial progress. But to say we have political clout that obviates the need for protection from discrimination is patently off the mark.
Posted by Steve Charing at 7:24 PM 2 comments:

High Court Ruling is a Detour on the Road to Equality 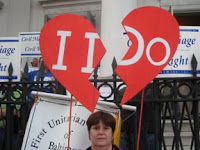 Letter Published in Sept. 17, 2007 Issue of USA Today
Steve Charing - Clarksville, Md.
USA TODAY's story "Is 9/11 becoming just another calendar date?" raises interesting points regarding how Americans now view the tragic events of that terrible date six years later.
While I suspect an overwhelming number of people from all over the world will never stop empathizing with the 9/11 victims' loved ones, many have soured on how the tragedy has been exploited for political purposes.
Not only did President Bush and Vice President Cheney falsely use the attacks as one of the rationales to launch the needless war in Iraq, but the Republicans also exploited 9/11 shamelessly during the 2002 and 2004 election campaigns.
They succeeded in trashing opponents by pumping fear into the hearts and minds of the American people. Now, listening to the current crop of GOP candidates for president, it appears the misuse of the tragedy will continue on as the pages of the calendar turn.
Posted by Steve Charing at 9:01 AM No comments:

Presumptive Baltimore Mayor-elect Sheila Dixon has been a long-time friend of Baltimore’s gay community. Her communications director, Anthony McCarthy—a familiar and rather high profile figure here—is openly gay. She has had several openly gay staffers since her days on the City Council.
Sheila Dixon, while City Council president, was a key force in enacting a law in Baltimore that prevents discrimination based on gender identity or expression. In that position, Ms. Dixon also pledged to help curb the burgeoning HIV/AIDS infection rate in the city. Her office was routinely involved with Baltimore Pride, and she worked to resolve disputes involving gays and local gay businesses. She also favors civil unions for same-sex couples.
All told, one can accurately describe her as gay-friendly, except for the fact she does not support nor would she sponsor a symbolic Council resolution backing same-sex marriage.
Endorsing same-sex marriage is just a line that Sheila Dixon and many gay-friendly elected officials and candidates refuse, at this time, to cross. From otherwise gay-supportive politicians like Governor O’Malley, a significant number of state legislators, Senators Benjamin Cardin and Barbara Mikulski, and all but two of the Democratic presidential candidates, their leap to gay marriage is fraught with obstacles—some religious but mostly political.
Most of these officials advocate civil unions with the full complement of benefits that would accrue. But to get to that next step—full marriage equality—has been a challenge and a source of frustration to proponents of same-sex marriage.
With Mayor Dixon, her affiliation with the AME Church precludes her from backing same-sex marriage, according to a report by the Washington Blade. But I wonder if defying the teachings of her church is acceptable to her if she favors a woman’s right to choose.
Many other elected officials and candidates, including those who are Catholic, use "religious beliefs" as a shield, as well. They are frequently pro-choice, pro-death penalty, pro-stem-cell research and have even divorced. These go against the grain of Church doctrine, but these politicians seem to fall in line with Church thinking when it comes to homosexuality.
The real answer, I believe, lies with political calculation. As polls indicate, the country has not yet reached the point of accepting same-sex marriage. Politicians know this and state their positions accordingly. I suspect that by disavowing such a resolution Mayor Dixon did the political math whereby it was more advantageous to offend those gay voters who believe in marriage equality than to alienate the powerful, influential African-American ministers within the city who strongly oppose same-sex marriage. It’s a hot button political issue that is dominated by religious doctrine.
Within the House of Delegates, only a handful of lawmakers vocally advocate same-sex marriage, with Liz Bobo among the very few heterosexual legislators who do so. Garnering support is going to be important when the Maryland Court of Appeals eventually rules on the constitutionality of the state’s marriage law.
If the court rules favorably, the extreme elements of the legislature, led by one-trick-pony, anti-gay Del. Donald H. Dwyer, Jr., will lead the effort to amend the state’s constitution by having the issue (minority rights) put before the voters.
Same-sex marriage, which had been thrust upon the political landscape by the 2003 ruling in Massachusetts, has been a good one for Republicans during the 2004 election campaign while being a canker sore for the Dems at all levels of government.
No Republican that I know other than those in the Log Cabin Republicans supports gay marriage. Most Democrats fear the consequences of the debate. No one wants to be pegged as someone who is willing to undermine the sanctity of marriage and to be accused of promoting the "gay agenda."
In speaking to a member of Maryland’s House of Delegates, the dilemma for Democrats is illustrative. He supports all rights for lgbt people and has had a progressive history throughout his political career. Yet, he is troubled by the word "marriage," and cannot find a way to embrace it.
It is hard to determine, at this point, what the political fallout will be from the Larry Craig toe-tapping toilet tango incident. Will the voters see his digression as another example of conservative hypocrisy? Or will they take the stereotypical view that gays furtively pursue sex wherever they can? Never mind that at least half of the participants arrested for engaging in public sex are heterosexual.
Or perhaps they will come to the realization that marriage equality and all that would bring would induce gays to seek monogamous, committed relationships. The public, as well as the politicians, must be made to understand that same-sex marriage activists are not seeking religious blessings of marriages; that it is the sole option of religious institutions.
Leadership will go a long way towards shifting public opinion. But it is always about getting elected and re-elected that dominate the words and actions of politicians. It’s unfortunate, but that is the political reality.
When public attitudes change, as they most certainly will over time, then elected officials will feel safe to trust their own beliefs and do what is right. Same-sex marriage will no longer be considered a taboo. To his credit, defeated mayoral candidate Keiffer J. Mitchell, Jr. was unabashed in his support for marriage equality. Hopefully Mayor Dixon and other friends of the gay community will see the light as well.
Posted by Steve Charing at 1:19 AM 1 comment: