Out on the Trail

Felix Facchine is the only out LGBTQ+ candidate for Howard Co. Democratic Central Committee. 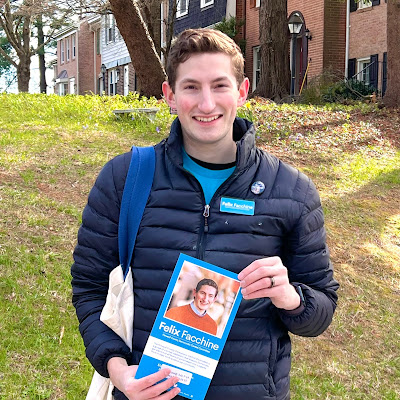 On a gorgeous April weekend, Felix Facchine did what many candidates for elected office do three months away from the primary. He knocked on doors, in this case through North Laurel and Columbia, Md.; phoned friends and associates asking them to chip in for his campaign; made appearances and mingled among folks at neighborhood festivals and events; and worked on his social media to help spread the word.

But Felix is no ordinary candidate. There are two aspects of his campaign for a seat on the Howard County Democratic Central Committee that adds uniqueness to Felix’s quest: he is not part of either of the two competing registered slates of candidates that encompass 40 of the 45 in the field, and he is the only openly LGBTQ+ candidate in the race.

The top 10 male vote getters and the top 10 females earn seats on the Central Committee.

I contacted a representative from each slate and confirmed that no out LGBTQ+ person is on their respective slate, and I confirmed the status of four of the remaining five who are unaffiliated. Unless that one raises his hand to say he is openly LGBTQ+, Felix is the only one running.

Felix Facchine chose to run independently and not be part of a slate of candidates. “I set the vision for my campaign in February, and decided at that time to run an independent, grassroots race for Central Committee.”

He explains, “The Central Committee is the elected leadership of our Democratic Party in Howard County and is responsible for growing our party, engaging with voters, and electing Democrats up and down the ballot. I am running for Central Committee to build on this important work and help lead our party into the future.”

By being LGBTQ+ Felix Facchine believes he can serve as an important voice on the Central Committee.

“One of the reasons that I’m running is that representation is important. I am proud to be an openly gay candidate for Central Committee, and I am committed to including and uplifting the voices of Howard County residents who identify as part of the LGBTQ+ community,” he points out.

“As a Central Committee, it is essential that we amplify all voices in our community and actively work to ensure that everyone has a seat at the table. Our Democratic Central Committee should reflect the diversity of identities, backgrounds, and experiences of our county, including LGBTQ+ voices.”

He adds, “As a Central Committee member, I will also center LGBTQ+ issues in our community. While Howard County has some of the strongest anti-discrimination laws in the country, there are still many areas where we must do more to protect and support our neighbors. Just recently, there have been concerted efforts to ban LGBTQ+ books from the library shelves in our public school system. These efforts have been rooted in harmful rhetoric about the LGBTQ+ community that seek to spread fear and misinformation. As a Democratic Party, we have a responsibility to stand firmly against these efforts that seek to divide our community and sow fear.”

He sees a broader role for the Central Committee as it relates to the community. “I would also like to see the Central Committee continue to partner with local LGBTQ+ organizations to support, uplift, and celebrate our LGBTQ+ neighbors,” Felix says. “We are a vibrant and growing county where everyone should feel welcomed, included, and able to live their authentic and best lives.”

In 2018 openly gay Bob Ford who had served on the committee was unsuccessful in his bid for re-election. He believed then and does now that representation matters, and for the past 4 years he notes there was no openly LGBTQ+ person on the committee.

“Despite the important gains stemming from marriage quality and gender identity protections, so much work remains to combat bullying in our schools including cyber bullying, fighting discrimination in the foster care and juvenile justice systems and homelessness among LGBTQ+ youth, to name a few. These tend to impact transgender individuals the most,” Ford said.

“It is imperative that there is a voice on the Howard County Democratic Central Committee to represent our LGBTQ+ citizens.” He adds, “While I have no doubt that most of the other Central Committee candidates support LGBTQ+ rights, being actually LGBTQ+ and having lived through the journey of coming out and dealing with issues that directly affect the LGBTQ+ population makes such a person uniquely qualified to represent and promote LGBTQ+ interests.”

"Our Democratic Central Committee should reflect the diversity of identities, backgrounds, and experiences of our county, including LGBTQ+ voices."

Says Byron Macfarlane, the county’s Register of Wills and the first openly LGBTQ+ person elected to office in Howard County and who happened to have been a member of the Central Committee, “As a key constituency of the Democratic Party, having LGBTQ+ representation on our central committees and in every level of elected officials is a matter of basic fairness and social justice. We have a large and growing queer population in Howard County and having us represented matters.”

Indeed, the LGBTQ+ community is an increasingly significant component of the Howard County and Maryland Democratic Party. To illustrate that point, when HoCo Pride took place in Centennial Park in June 2019—an event co-sponsored by the Howard County chapter of PFLAG and Howard County government—a crowd of approximately 10,000 attended, according to the county’s Department of Recreation and Parks.

By some estimates there are several thousand voters in Howard County who identify as LGBTQ+.  Adding in families, friends, co-workers, neighbors and allies, the LGBTQ+ community has emerged as a potent coalition within the party.

Felix Facchine, 24, is a lifelong Marylander and has called Howard County home for the past five years. He’s worked on numerous Democratic campaigns since 2015, including knocking over 10,000 doors during the 2018 election to help achieve record Democratic turnout in Howard County. Last year, Felix graduated from University of Maryland Baltimore County (UMBC) with a Master’s in Public Policy and has worked in county government since 2018. He lives in Columbia with his fiancé, Saad, and two cats.

“We love being part of this welcoming and inclusive community and are so glad to have made Howard County our home.”

He hopes that if you elect him to the Howard County Democratic Central Committee on July 19, he can help make the community even more welcoming and inclusive.

Given his work ethic, you will likely see Felix on the campaign trail in the coming months.

To learn more about Felix Facchine’s campaign, you can follow him on social media at @Felix4HoCo and on Facebook.

UPDATE: The Columbia Democratic Club held a straw poll on May 21 of the 45 Central Committee candidates.  Felix was the top male vote-getter garnering over two-thirds of the vote and came in 2nd overall.
If you wish to make a donation to his campaign to help spread the word around Howard County, you may visit here. 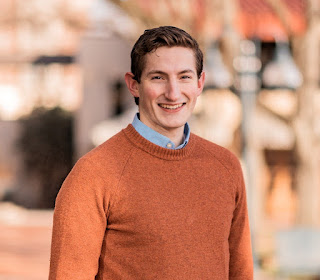