Why Should Iowa Matter to Gays? 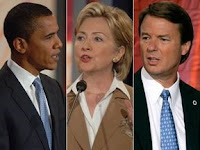 Don't forget Rudy! He is quite gay-friendly, comparable to most of the Democrats running. And he might just beat Romney for the GOP nomination. A Rudy-Obama race could turn out to be quite interesting. Perhaps it would be an implicit contest to see who can be MORE gay friendly! I just hope he doesn't pick Fred Thompson as a running mate as the Washington Times suggested.

I don't believe there will be a race to see who is more gay-friendly during the general election. The Republicans won in 2004 on the backs of gays and lesbians. They won't change their playbook now. Rudy is no more gay-friendly than Barack. He is also opposed to same-sex marriage. But it's all moot. Rudy won't get the nomination; his baggage is starting to pile up big time.

There ARE no gay-friendly Republicans, Tim. They're all pandering to the evangelical voters in various degrees, hoping again for a Roveless-miracle in a time of a brain dead Bush.

We seriously NEED to elect a Democrat or consider emmigrating to Canada. That said, I don't believe that either Clinton or Obama are electable. I do believe that if either one is the Democratic nominee, we run the likely risk of another Republican president. After all, the Democrats have not acquitted themselves very well since November 2006.

At this stage, it appears that no one is electable--Democrat or Republican--because they each have flaws that could easily be exposed by the opposite side. This race promises as exciting as any and will be a nailbiter.