Why Trump is More Dangerous Than Ever 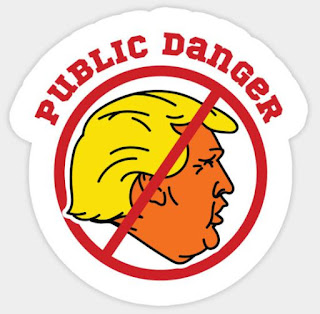 When Donald Trump was in office, many people thought he was dangerous. He only held his self-interests as a priority, had little knowledge of the workings of government, coddled international dictators and despots and helped give rise to white nationalism.

As he became more unglued throughout his term, his potential to perform reckless and dangerous acts if his ego was damaged or he felt aggrieved increased.

When Joe Biden won the election and Trump was either in denial or created a fantasy to keep his following in toe, even more people including past government officials and members of Congress were authentically worried Trump would do something risky, reckless and dangerous. They even wondered if the mercurial president should be allowed to possess the nuclear codes during the interregnum.

All of our fears were borne out when he incited an insurrection of our government on January 6—the 3rd Day of Infamy this country ever experienced. All of it was caused by the “Big Lie” in which Trump and his acolytes say the election had been stolen from him because it was rife with fraud. It simply was not true, but it served this narcissist to perpetuate such a lie to rile up his base.

He exhorted his frothing cultists to “take back our country” and do it with “strength.”  Does anybody really believe those instructions were meant for the supporters to participate in a peaceful protest consisting of chants? If so, why didn’t Trump do anything to quell the violence?

Because he loved it.

Most of the House Republicans and 43 in the Senate didn’t think Trump incited the mob he invited weeks earlier or they did but they couldn’t acknowledge it publicly lest they incur the wrath of Trump.

No good decent public servant would tolerate such an egregious incitement to violence that killed 6 people. But more than a few of Trump’s enablers are spouting yet another lie that the rioters were antifa sympathizers posing as Trump supporters and not at all those angels who tried to run a Biden campaign bus off a highway.

Yes, Trump was dangrous while in office. He is more dangerous now.

While he has no official powers as an ex-president, he holds much power—too much, in fact.  The recent CPAC confab symbolized by the rolling out of a golden likeness of Trump shows that there is a dear leader the Republicans must cozy up to.  Trump commands the adoration of an overwhelming majority of Republicans. As insidious as January 6 was and as obvious Trump was the instigator of the violence and carnage, only 11 percent of Republicans found him responsible for it, according to a recent Quinnipiac poll.

“He may be down, but he is certainly not out of favor with the GOP,” says Tim Malloy, who conducted the poll for Quinnipiac University. “Twice impeached, vilified by Democrats in the trial, and virtually silenced by social media ... despite it all, Donald Trump keeps a solid foothold in the Republican Party.”

Furthermore, the seven Republican senators who voted to convict Trump at his impeachment trial have been censured by their local or state Republican parties or are facing blowback from voters back home.

This is why Trump is dangerous even today. He has the GQP wrapped around his finger as one leading Republican after another migrates to Mar-a-Lago to kiss the ring worn on that very finger. 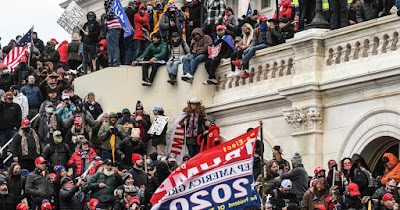 These Republicans as well as right wing media continue to foster the big lie that Trump actually won. They are terrified to stray from that lie, which will provide them another opportunity in 2024 to try to de-legitimize the election should the Republican presidential nominee lose. Add that to the active voter suppression efforts in several states to screw Black citizens and you have a formula for the end of democracy as we know it. A toast to Vladimir Putin!

All of this will happen with Trump cheerleading from the sidelines. Don’t worry, he won’t be the nominee. He teases the country but he will not make another run. Trump will raise oodles of cash for his PAC, which he could use any way he wants. In the meantime, as he executes this charade, he freezes out would be candidates and their ability to raise money almost certainly leading to another loss.

With all their adulation of Trump, Republicans should note that with him at the helm, they lost the House, the Senate and the White House. As a visible ex-president, that streak could continue over the next two cycles.

Then there is the legal exposure Trump faces on several fronts. I firmly believe there is a better than 50 percent chance he will be indicted for possible tax and bank fraud at a minimum in Manhattan. What happens to him after that remains to be seen.

But Trump controls the Proud Boys and all the other violent white nationalist militias. Imagine if an indictment (or more) is handed down how these domestic terrorists may react. Imagine Trump telling them that this was another witch hunt and we need to re-take our country. Imagine what they will do at court houses and other government buildings.

You know he won’t peacefully accept a prison sentence. It will make January 6 seem like a block party.

That is why the danger Trump poses now is even greater than what it was before.

Posted by Steve Charing at 8:44 PM No comments: