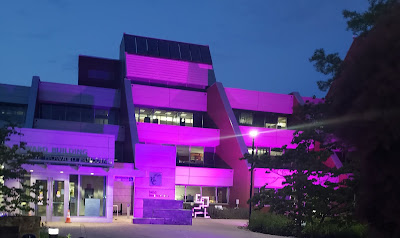 June has traditionally been LGBTQ Pride Month (originally called Gay Pride) ever since the Stonewall uprising in June 1969 that most historians credit as the birth of the modern gay rights movement. In Howard County, Maryland, the tradition continues.

On the evening of June 7 County Executive Dr. Calvin Ball read an executive proclamation recognizing June as LGBTQ+ Pride Month in the county. The event was witnessed by nearly two dozen diverse members of the county’s LGBTQ+ community and supportive allies who gathered in front of the George Howard Building—the seat of the county government—for the ceremonial proclamation reading.

Whereas… The LGBTQ+ community in Howard County is vibrant and growing with a mission to create ongoing opportunities for open dialogue about sexual orientation and gender questioning for those who identify as lesbian, gay, bisexual, transgender, queer+; and

Whereas… Each resident deserves to be accepted with compassion, acknowledged for their contributions and inspired to celebrate life’s gifts within a safe and supportive community; and

Whereas… It is fitting for Howard County Government to recognize Pride Month as a way to support individual rights and reaffirm our commitment to inclusion, equality and justice for all.

When the skies darkened following the ceremony, the Howard Building was alternately bathed in lights representing the colors of the rainbow, the familiar symbol of the LGBTQ+ community.

In 2019, Howard County government co-sponsored the first ever LGBTQ+ Pride celebration in the county, which turned out to be a colossal success with some 10,000 attending. HoCo Pride will renew the festivities on October 9 after a year off because of the pandemic.

The significance of the proclamation presented by the County Executive was not lost on LGBTQ+ community leaders.

“This is a very important moment for the community,” says Jumel Howard, Chair of HoCo Pride, Vice President of PFLAG Howard County, and Regional Director of PFLAG Mid-Atlantic. “We are appreciative of the County Executive and his administration for being on the front lines in advocating for equity and inclusion for the LGBTQ+ community.”

Alisha Tronetti, a student at University of Maryland and a member of the HoCo Pride Steering Committee, points out, “Events like these are extremely important. The LGBTQ community is small and need the public display of support from county government.”

Others see this as an opportunity for progress beyond the symbolism of this recognition.

“I’m grateful our county government has recognized Pride Month,” says Byron Macfarlane, the county’s Register of Wills and the first openly LGBTQ elected official in Howard County. “It sends a message that Howard County embraces the LGBTQ+ community and that hate has no home here.”

He adds, “I hope that beyond today’s proclamation, we’ll continue to break down barriers and stand in solidarity for true and meaningful equality in every aspect of the daily lives of our LGBTQ+ friends and neighbors.” 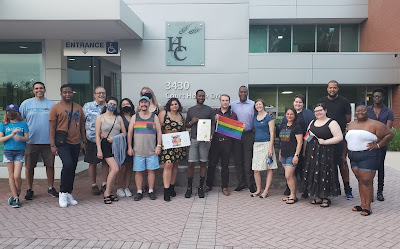 A video of the proceedings produced by the Office of the County Executive is shown here.

Posted by Steve Charing at 1:44 AM