Alphabet Mafia Showcase Promises to be Funny to the Letter

I Baltimore will once again be treated to live (that’s right, live!) entertainment as an eclectic group of young LGBTQ+ comedians from around the mid-Atlantic region will celebrate Pride by performing at The Crown on June 26. And who cannot use a good laugh about now?

“Comedy in the DMV is a multifaceted and diverse scene, as is the LGBTQ+ community, and this show works to provide opportunities to all kinds of comedians within the community.”

Because of the pandemic, entertainers had to perform on Zoom or other digital platforms.  Going live for this show pleases Leizear.  “We wanted to celebrate Pride with a laugh shared in person at a beloved venue that has always been a home to out and proud performers of all kinds,” he says.

No stranger to comedy, Leizear is a show runner at The Lou Costello Room in Hampden and has performed at DC Pride, the Ellicott Silly Comedy Festival, and the Charm City Comedy Festival. With over a decade of theater and improv behind him, Leizear says his humor “focuses on his experiences as a queer millennial dealing with nerdom, anxiety, dating, and being a gay little fish in a big straight pond.”

Leizear is eagerly anticipating Alphabet Mafia performing at The Crown. “The whole lineup is beyond ready to get back out there to live comedy and is excited to do what we do best: make people laugh!” 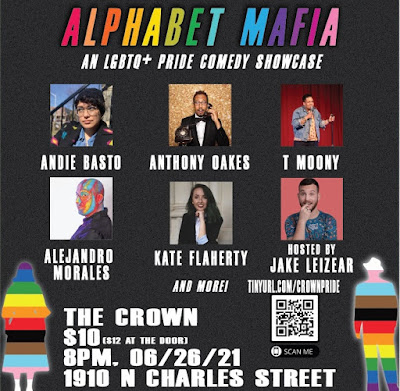 Posted by Steve Charing at 8:31 PM