The Bodyguard at Toby’s Serves up Tuneful Moments in Time

It’s pretty safe to say that most people, regardless of their favorite music genres, enjoy the tuneful songs made popular by the late great Whitney Houston.  We remember such classics as “So Emotional,” “One Moment in Time,” “Saving All My Love for You,” “How Will I Know,” “I’m Every Woman,” “Greatest Show of All,” “I Have Nothing,” “I Wanna Dance with Somebody” (my personal favorite) and one of the biggest selling songs of all time, “ I Will Always Love You.”  In all, Houston sold an estimated 170 to 200 million records worldwide.  #hocoarts

These and other delicious songs (as well as the tasty buffet) are served up at Toby’s, the Dinner Theatre of Columbia in its presentation of The Bodyguard.  Helen Hayes Award winners Toby Orenstein and Mark Minnick co-directed this musical adaptation of the Oscar-nominated 1992 film that starred Houston and Kevin Costner.

Ms. Orenstein and Mr. Minnick helms a well-paced, efficiently staged production showcasing an incredibly talented cast that provides Whitney Houston fans a fulfillment of the craving to hear those many pop hits primarily from the 1980s and 1990s.

Written by Alexander Dinelaris, the musical version opened in London’s West End in 2012 just ten months after Houston’s untimely death and captured several awards. The Bodyguard, which has not appeared on Broadway, modernizes the story from the movie and includes additional songs.  Mr. Dinelaris’ storyline is captivating with its dramatic highs and lows.

The story offers a mix of romance, mystery, violence, tragedy, devotion, well-placed comedy and a shocking climax. It revolves around superstar performer Rachel Marron and her relationship with her newly hired bodyguard Frank Farmer, a former Secret Service agent who is charged to protect her from a mysterious sinister stalker. 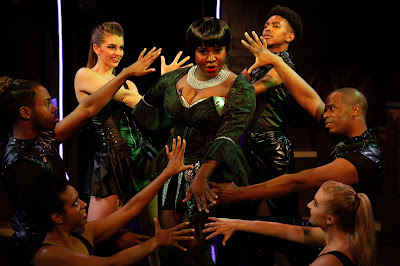 At first she resists Farmer’s absolute control of her movements and schedule including where she can eat.  But eventually such friction gives way to attraction and they both fall in love.  Adding to the mix is Rachel’s sister Nicki, a dive bar singer, who despondently lives in the shadow of Rachel and who also develops feelings for Farmer.

The songs are very neatly woven through the story and are exquisitely performed by Helen Hayes Award nominee Ashley Johnson-Moore as Rachel Marron and Samantha McEwen Deninger as Nicki. (Full disclosure: I first fell in love with the talents of then Samantha McEwen when in 2012 she won  the Rising Star competition at the Annual Celebration of the Arts gala at Howard Community College. She has been a prolific and outstanding performer at Toby’s since.)

Both leading women excel in their sultry, silky smooth and soulful interpretations of the familiar Houston numbers with powerhouse vocals, hitting every note with virtuosity.  Several of the songs are duets and production numbers while others are solos.  In addition, each demonstrates potent acting skills especially in the tender romantic moments.

Their duet “Run to You” was nothing short of spectacular. Ms. Johnson-Moore shines in all of her numbers, such as “One Moment in Time,” but her rendition of “I Will Always Love You” near the end of the second act is a moving, tear-producing tour de force and a show highlight.  Ms. Deninger induces goose bumps with her selections including “Saving All My Love for You.”

"Both leading women excel in their sultry, silky smooth and soulful interpretations of the familiar Houston numbers with powerhouse vocals..."

Russell Sunday does a fine job as the mainly serious and seemingly unemotional bodyguard Frank Farmer. His acting skills are on display as he attempts to reconcile his growing attraction towards Rachel with his dedicated mission to protect her from harm.  Despite the prevailing seriousness between the two, we find some amusement in a karaoke bar.  In that scene Farmer, a self-admitted poor singer, attempts “I Will Always Love You” followed by a disguised Rachel performing “I Have Nothing” to an admiring crowd who captured the performance on video.

Adorable Chase Reaves (alternates with Gavin Lampasone and Kaden Lampasone) is endearing as Rachel’s young son Fletcher.   He tugs at your heart as he develops a fondness towards Farmer and becomes an important ingredient in the plot.

As The Stalker, a scruffy Justin Calhoun doesn’t have much of a speaking role but his menacing presence is felt throughout.

Shadowy and mysterious, The Stalker is occasionally seen in an enclosed room in a balcony designed by David A. Hopkins. The Stalker’s silhouetted visage becomes visible when a light shines on him. Mr. Hopkins is also responsible for the lighting design and its effects throughout the show are exceptional.

The talented Ensemble adds to the entertainment with several sparkling production numbers that are choreographed deftly by Shalyce Hemby. “Queen of the Night,” “How Will I Know,” “I Wanna Dance with Somebody,” and “I’m Every Woman” are performed with precision by the talented and energetic ensemble. Ross Scott Rawlings ably conducts the six-piece orchestra playing the sweet melodies with the right amount of volume that succeeds in not drowning out the stellar vocalists.

The encore consisting of the entire cast performing “I Wanna Dance With Somebody” is a toe-tapping, hand-clapping spectacle.
The darkness and subsequent tragedy contained in the plot of The Bodyguard  do not induce many smiles. However, the enjoyable music popularized by Whitney Houston and the polished performances by Ashley Johnson-Moore, Samantha McEwen Deninger and Russell Sunday as well as the other cast members make the show a must-see experience.

Posted by Steve Charing at 2:24 PM