Maryland: A Blue Oasis in a Red Desert 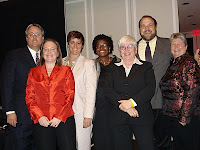 When the elections dust settled following the “shellacking” as characterized by President Obama, it is clear that progress on LGBT rights at the national level took a step backwards, perhaps several steps. And we didn’t help matters as an estimated 31 percent of LGBT folks voted Republican this year compared to 28 percent in ’08.
I am not certain that these numbers are completely accurate, but if true, it means more LGBT Americans voted for the GOP, ignoring the fact that the party continues to remand us to second-class citizenship. Sure, there were those who wanted instant gratification from President Obama and decided to “punish” him. He is to blame, according to critics, and Congress is as well, for not fast-tracking key LGBT legislation.
Obama campaigned on a pro-LGBT rights platform, and aside from a record-shattering number of LGBT appointments in his administration and the passage of a comprehensive hate crimes bill, we still have ENDA languishing in the Congress, and the repeal of “Don’t Ask, Don’t Tell” is very much in doubt thanks to John McCain and his band of merry bigots.
In retrospect, if Obama was dedicated to our issues, he could have pushed these initiatives when he had the window of opportunity knowing the mid-terms would likely be crippling, as they tend to be.
It seems that a third of our community would rather delay these rights indefinitely out of anger with the President. Do they really think they would have a better shot at success with a party that essentially despises us? Talk about voting against one’s own interests.
So there we have it. New House Speaker John Boehner with the gaudy score of zero out of a hundred by the Human Rights Campaign grading system will be keeping our issues in the closet. So forget any progress on the national stage for at least the next two years. We may even have to play defense with talk of another Federal Marriage Amendment rearing its ugly head.
Maryland, thankfully, was a different story. Anti-equality Bob Ehrlich saw his political career take a devastating hit as Governor O’Malley “shellacked” him by 13 percentage points—double the margin in 2006. For our community it means that should marriage equality or gender identity protections bills ever make it out of committee and passed by the legislature, O’Malley vowed to sign it.
There are a significant number of skeptics, including Attorney General Gansler, who feel such legislation will not take place. He is of the mindset that only the courts will provide that level of equality. We will see. But had Ehrlich regained his old job, it was a certainty that nothing would succeed legislatively for our community.
Bucking the trend nationwide, most other Democratic incumbents retained their seats in the legislature. But the one exception, Representative Frank Kratovil (1st Congressional District), could not hold on and lost to homophobic right wing extremist Republican Andy Harris. Hopefully, after the next two years, the voters in that district will wake up.
On a more positive note, we will no longer have to deal with one of the most anti-gay legislators of modern times, Alex X. Mooney. He was finally defeated after declining margins of victories in his past three campaigns by a pro-equality former Mayor of Frederick, Ron Young.
There remains other homophobes in the State House—Nancy Jacobs, Donald Dwyer, and Emmett Burns come to mind. We’re not out of the woods yet. But our chances were given a boost by the election of three LGBT candidates: Luke Clippinger, Mary Washington and Bonnie Cullison. They now join four other openly gay legislators giving Maryland one of the highest number of out gays and lesbians to hold statewide office.
In the case of Mary Washington, her victory was historic in that she became the first out African-American lesbian to serve in the Maryland legislature and only the second one in the nation.
Also historic was the election of Byron Macfarlane to Howard County’s Register of Wills. By winning this tight contest that was decided by counting absentee and provisional ballots ten days after the election, Macfarlane became the first openly gay county-wide official in Maryland history. He defeated a 6-term Republican incumbent Kay Hartleb.
Despite a few disappointing exceptions this election, Maryland remains a blue state oasis in a national desert of red. As we head towards Thanksgiving, that is something to appreciate.
Photo by Lisa Polyak
Photo caption:
Our new LGBT caucus--from left: Sen. Rich Madaleno, Delegates Anne Kaiser, Heather Mizeur, Mary Washington, Maggie McIntosh, Luke Clippinger and Bonnie Cullison.
www.SteveCharing.blogspot.com.
Posted by Steve Charing at 11:34 PM No comments:

Posted by Steve Charing at 2:03 PM No comments:

With O'Malley's Win, it's Time to Deliver

When Governor Martin O'Malley concluded his remarks to the over 360 in attendance at Equality Maryland's annual fall fundraiser in College Park, the crowd responded with a generous round of applause. It was an effective campaign speech that was tailored to the LGBT audience. Seldom, if ever, did he ever discuss LGBT issues on the trail.

Appearing at the gala just 9 days before Election Day, he deftly drew contrasts between his positions on LGBT rights and that of his opponent, Robert L. Ehrlich, Jr. “Two different governors, two different choices” was the theme. "I'm running against the alternative," the Governor affirmed. (These sharp contrasts led to Baltimore OUTloud's endorsement of Governor O'Malley's re-election on October 22—among the first newspapers in the state to do so.)

While the clapping continued as the Governor descended from the podium, some of the activists in the audience had to notice that the speech broke no new ground. Governor O'Malley reiterated his position that he would sign a marriage equality bill on the condition that it contained "religious protections." He also stated that Maryland "can and should" pass a bill that would offer anti-discrimination protections on the basis of gender identity and expression.

What was missing from his remarks was a full-throated endorsement of marriage for same-sex couples. That would have made news and upgraded his current position of favoring civil unions.

He did not make such a declaration even to a LGBT/friendly audience that had a good number of other elected officials, including potential 2014 gubernatorial candidate, Attorney General Douglas F. Gansler, in attendance. Cautious not to alter the trajectory nearing the election, the Governor remained passive on the issue.

Leadership and courage –that's what we're asking for. Stop worrying about the religious protections, Governor. They have been in the bill for three years. Even the Baltimore Sun argued O'Malley should take a stronger stand, referring to marriage equality as a "key civil rights issue."

But O'Malley's passivity could all change if effectively lobbied.

O'Malley has won re-election and can serve his second term without the encumbrances of another campaign—at least for Governor. Recall how then Governor Parris Glendening in his second term and an approval rating as low as the Titanic's wreckage, managed to push through the hard-fought Anti-Discrimination Act of 2001 that offered key statewide protections to lesbians and gays. It would be a terrific addition to the O'Malley legacy if these landmark equality bills were enacted, but he needs to advocate for passage, not wait.

"We are on the cusp of pushing through gender identity protections and marriage equality."

That is the mantra repeated in a slew of fundraising e-mail blasts and press releases from Equality Maryland, the organization that has been the vanguard on LGBT issues in the state. Indeed, we do have momentum—or we should have—following the issuance of Mr. Gansler's opinion last February which concluded that Maryland should recognize the marriages of same-sex couples validly performed in other jurisdictions. Soon after, neighboring Washington, D.C. legalized marriages for same-sex couples.

But nothing of that nature materialized in 2010 for the nearly 16,000 gay and lesbian couples in Maryland. It was deemed a "transition year" by Equality Maryland, and their belief was that during an election year our legislature would not be keen on taking up the issue. This despite the fact that one Maryland couple after another trudged to D.C. (or elsewhere) to tie the knot, and dollars that could have boosted Maryland's sagging economy from wedding-related expenses were spent outside the state's borders.

Winning over legislators in both houses is crucial, of course. But why not try to meet with the leaders—Michael Busch, Thomas V. "Mike" Miller, and O'Malley himself? Hire a paid lobbyist or two to free this legislation out of the prison known as the Senate Judicial Proceedings Committee. If a bill isn't sent to the Governor, he can't sign one.

Despite the fact Equality Maryland has had three different executive directors during the past three years, the organization is stable and positioned to lead the fight. Equality Maryland should be well-financed to help achieve its goals. Former development director, Kevin Walling told Baltimore OUTloud upon announcing his departure in September that he helped raise an estimated $500,000 through grants, increased foundation gifts and general fundraising during his stint of less than two years.

The College Park gala was hailed a "success," and according to a report in the Washington Blade, raised an additional $20,500 beyond the receipts for the tickets and silent auction. Local bars and events have boosted Equality Maryland's coffers with a number of fundraisers. Moreover, their ongoing post card campaign has enabled the organization to expand its mailing list for future fundraising efforts.

Most importantly, Equality Maryland's leadership and staff are strong. The current director, Morgan-Meneses-Sheets, is an affable, high-tempo, hard-working leader who is capable of making LGBT equality history during the next couple of years.

We can't predict what lies ahead in 2014. Who anticipated that in two short years this country's political landscape would shift so dramatically? Let's see results on the two main issues—marriage equality and gender identity protections now—while we can.

As Equality Maryland, points out, "we're on the cusp." The ball is in their court, and now it's time to deliver.

Posted by Steve Charing at 1:22 AM No comments: