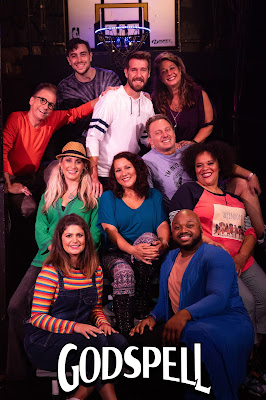 Godspell has been around for 50 years, but the musical’s message of love, kindness, tolerance and loyalty is timeless.  The high energy, entertaining production of this classic musical now playing at Toby’s Dinner Theatre, has been clearly modernized to reach a contemporary audience.

From the opening Prologue when the 10-person cast all use smartphones as props to many modern references including lampooning popular game shows, TV series and even Donald Trump, you knew you were not in 1971 when the production had opened off Broadway.

Based on the Gospel of Matthew, the show is a mixture of Scripture parables as told by Jesus loosely tied together with an eclectic array of songs, such as rock, pop, folk and vaudevillian, and dance.   Yes, there is Jesus (played superbly by Justin Calhoun) and John the Baptist/Judas (played splendidly by Shane Lowry).

However, the other eight characters, who all remain on the stage throughout the production as do the aforementioned ones, will not be found in any version of the Bible. In fact, the performers are assigned their own names rather than biblical or even fictional ones.  They comprise an eccentric collection of comical folks, decked out in everyday street clothes, all with different personalities, who work with Jesus to present lessons through parodies of pop culture and politics. These moments elicit most of the laughs in the show—not the lessons themselves but the manner in which they are conveyed.

For example, Toby’s veteran Jeffrey Shankle delivers hilarious impersonations during these sequences with none better than that of Donald Trump when the topic of taxes comes up.

Though enjoyable, Godspell seems to be searching for an identity. In many places the show features full-on comedy with vaudevillian shtick, slapstick, corniness and other high-jinks especially during the first act. In other parts, serious messaging, teachable moments from Jesus and, of course, the tragic ending of Jesus’ life on Earth contribute to a noticeable change in mood. Sometimes, the solemn and virtuous lessons can be overwhelmed and distracted by the comedy.

With music and lyrics by Stephen Schwartz who went on to pen Pippin and Wicked, and a book by John-Michael Tebelak, Godspell whose most well-known song “Day By Day” has become a staple of high school and community theatre as well as numerous professional mountings, revivals and tours since its debut.

Co-Directors Mark Minnick and David James—both Helen Hayes Award recipients—masterfully guide the performers and technical crew in a cohesive, fast-paced production. Mr. Minnick also choreographed the production and deftly arranged dance numbers in a tighter than normal area of the in-the-round stage because of the set pieces that remained onstage throughout.

The performers are called on to dance, ride a bicycle and move about navigating and weaving around these set pieces that include benches, bleachers, lamp posts, and a swing while staying in synch with the music, which was ably performed by conductor Ross Scott Rawlings and his 4-piece orchestra. (Nathan Scavilla conducts in other performances. )

So much was this orchestra integrated into the show that it was actually visible to the audience whereas in most other Toby’s productions they are concealed by a curtain in the upper level. Mr. Rawlings even briefly participated in one of the parable games from his perch.

As Jesus, handsome Justin Calhoun is masterful on many levels. Mr. Calhoun lights up the stage with charisma and energy, and his beautiful tenor voice soars in “Save the People,” “All the Best” and “Alas for You.”

In a simply dazzling performance of a challenging dialogue-heavy role, Mr. Calhoun, showcases his versatility to the delight of the audience.  Aside from his excellent vocals, he dances with precision and clearly seems to enjoy himself while doing so. He also demonstrates his athleticism by using a jump rope while singing and manages to juggle two basketballs. Mr. Calhoun’s comedic lines are delivered with gusto, and when called upon in dramatic moments like when Jesus is experiencing self-doubt, he pulls that off as well.

"Mr. Calhoun lights up the stage with charisma and energy..."

And boy does his character show patience! Trying to earnestly teach the Gospel, Jesus must overcome the rowdiness, unruliness, and smart-alecky behavior of the troupe. Mr. Calhoun demonstrates the right balance of exasperation but mainly patience as he plows through the distractions.

Shane Lowry does a fine job in portraying John and then Judas. As John the Baptist, he is Jesus’ most loyal fan and most fervent disciple. Later as Judas, Mr. Lowry further puts his acting skills on display as a doubter and then a rebel leading to the climactic conclusion. He dances smoothly and sings ably in “Prepare Ye the Way of the Lord” and “All for the Best.”

Each of the talented company members has a chance to shine and lead off a song with the rest of the company joining in. Janine Sunday sings the show’s popular number “Day By Day” with a sparkling-clear, lovely voice.  Crystal Freeman delivers a powerful and emotional performance in “O, Bless the Lord, My Soul”—one of the show’s standouts.

Rounding out the excellent female cast are Heather Beck (“Light of the World,” “Turn Back, O Man,” “On the Willows”), MaryKate Brouillet (“By My Side” with Janine Sunday) and Tina Marie DeSimone (“Learn Your Lessons Well”)—all exceptional performers through voice, dancing and comedy.

DeCarlo Raspberry, showcasing his powerful vocals, is sensational in his moving rendition of “All Good Gifts.” It is another standout performance.

Jeffrey Shankle and David James are always high camp in Toby’s productions, and Godspell is no exception. They are hilarious throughout with their antics and comedic lines. But as many Toby’s patrons know, they can also sing quite well.

Mr. Shankle is outstanding in “We Beseech Thee” and “On the Willows.” Mr. James performs nicely with Heather Beck in “Light of the World” and “Turn Back, O Man,”

The technical crew is proficient in contributing to the success of this production. David A. Hopkins, who also designed the simple and functional set, does a superb job with the lighting effects especially in the second act. John Pantaziz’s sound design is also spot-on.

Godspell at Toby’s is a quality production aided by superb direction, strong technical elements and a lively, talented cast.   The musical provides teachable moments that convey timeless messages of love and kindness and delivers high energy performances, lots of laughs and joyful music.

It also has a bit of history with Toby’s as it was the first show on Toby’s stage 41 years ago. Toby Orenstein, the owner and artistic director of Toby’s, dedicated this revival production to the memory of James W. Rouse who founded the city of Columbia by bringing people together as is the message of Godspell.

Godspell plays through October 31 at Toby’s Dinner Theatre, 5900 Symphony Woods Road, Columbia, MD 21044.  Tickets may be purchased by calling the Box Office 410-730-8311 or visiting Toby's website as well as Ticketmaster.

Toby’s website also contains the theater’s updated Covid-19 policies and protocols that are in place to ensure the health and safety of the employees and patrons including the requirement that proof of Covid-19 vaccination must be presented or proof a negative Covid-19 test taken with 72 hours of the performance.

Photos by Jeri Tidwell Photography
Posted by Steve Charing at 2:01 PM No comments: