A Well Performed 'Evita' at Olney

As we get immersed in the political season in the U.S., one should recognize that what we have here—divisive and often angry politics—is quite tame compared to other periods in our world’s history.  The political atmosphere during the 1940’s to 1950’s in Argentina, which was at times tumultuous and deadly, forms the backdrop for the musical Evita that is currently playing at the Olney Theatre Center.  #hocoarts
Andrew Lloyd Weber’s music and Tim Rice’s lyrics powered Evita to seven Tony Awards in 1980 with the musical achieving considerable success throughout the world. The lyrics and storyline of the musical are based on Mary Main’s biography, Evita: The Woman with the Whip,
The story, told mostly through song, spans the rise to prominence of Eva Perón from her impoverished beginnings at the age of 15 to her ascent to power by becoming Argentina’s First Lady and concluding with her early death at the age of 33.  Along the way, Eva was a radio actress who had reportedly slept around to gain advantage. She met a military colonel Juan Perón at an earthquake relief concert and eventually became his wife prior to his becoming the country’s president.

Posted by Steve Charing at 10:43 PM No comments:

And for those who believe that he was instead carrying out an attack in the name of ISIS consider this: Mateen could have gone anywhere to commit mass murder.

Instead, he chose this place at this time and this crowd.  He singled out Pulse since he was familiar with the establishment, and as witnesses reported, he had been there multiple times.  The people who patronized Pulse that night were his targets of choice.
For sure, the anti-gay crowd was relieved to learn that Mateen phoned the police during the massacre saying he pledged allegiance to the leader of ISIS.  To them, this rampage was simply an act of terrorism and, of course, President Obama’s perceived weakness and inability to eradicate the murderous terrorist group.

It was not an attack against LGBT people who were celebrating Latin night at the Pulse during Gay Pride month, they concluded.  The terms “gay” or “LGBT” were scarcely muttered; there was massive denial.


President Obama set the record straight as he and Vice President Biden laid down bouquets at a memorial in Orlando.
“This was an act of terrorism but it was also an act of hate,” the President declared. “This was an attack on the LGBT community.”  He’s correct.


The aftermath of the shootings revealed America’s darkest side especially when it comes to anti-gay fervor.  It suggests to me that based on this hate, Mateen carried out what some homophobes would love to have done if they could get away with it.
It wasn't a backlash from the victories in marriage equality.  Anti-gay governors and legislatures are acting on that already under the guise of “religious freedom.” 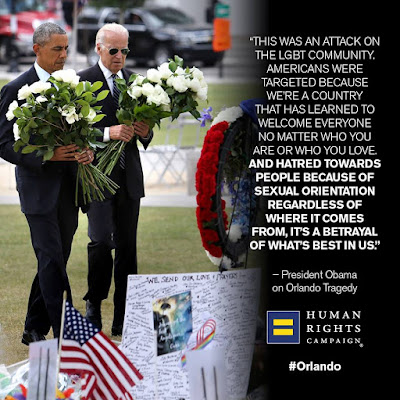 No, the reactions reflected pure hatred.  Some have cheered the massacre.  “Better that he killed the perverts and not the normal people,” said one a-hole on the Internet.
Less extreme are those straight people who snickered at the news and offered up what they think are clever comments about the tragedy.  Some don’t even mention it anymore, if they ever did, and want the story to disappear unless it’s couched in anti-terrorism terms.

Remember when terrorists attacked Paris and all those straight folks covered their Facebook profile pictures with French flags?  You don't see as much Orlando or gay images this time around from these people.


Others are more direct, such as the burning of a rainbow flag this past week outside a Washington, D.C. restaurant can attest.  Or this recent incident in D.C..
We’ve made considerable—almost unimaginable—progress in recent years and more and more people are supportive of LGBT people and our rights.  However, LGBT individuals, especially transgender people of color, are attacked violently or killed with chilling regularity.  Kids are still mercilessly bullied in schools.


Yes, we made progress in recent years and some positives will come out of this tragedy so that 49 innocent people’s horrific deaths will not be in vain.  Hopefully, common sense gun reform will be among them.
As I told a reporter during a candlelight vigil in Baltimore, “We can have laws on the books to confer LGBT rights.  We cannot legislate attitudes.  This has always been the challenge in civil rights movements.”


Hate still exists.  Gay bars were supposed to be a “safe” space—a sanctuary—for LGBT people to congregate and socialize without judgment or violence.  Not anymore.  The horror in Orlando and the reaction of the anti-gay haters taught us that we’re still targets.
Posted by Steve Charing at 8:15 PM No comments: