We Don’t Know How to Quit Ya

The GQP made what is likely to be a costly decision to let Trump off the hook. 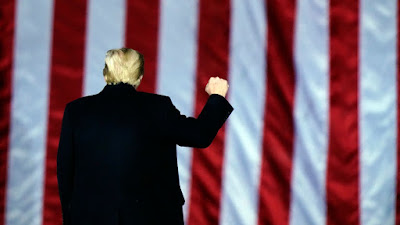 The dust has settled on Donald Trump’s record breaking 2nd impeachment trial, and the Monday morning quarterbacking, recriminations and speculation about the political future for both parties expectedly began.

For his part, the former president by a vote of 57-43 was found guilty of the impeachment charge of “inciting an insurrection” for the deadly January 6 assault on the Capitol and democracy, but because of the Constitution’s requirement that two-thirds of the Senate is needed to remove and disqualify, Trump wriggled off the hook.

Keep in mind, if you win or lose and election by a 57 percent to 43 percent margin, that would be considered a landslide by many. So Trump’s feeling so good about the result or believing he was exonerated is absurd. The failure to convict was largely accomplished based on a technicality that Republicans believed or they say they believed that a former president cannot be impeached and removed from office despite historical precedent. That was the off-ramp for 43 Republicans including Senate Minority Leader Mitch McConnell.

Trump issued a statement that said the impeachment was “yet another phase of the greatest witch hunt in the history of our Country” and that “no president has ever gone through anything like it.”

And no president ever incited a mob to breach, loot and defile the Capitol and to threaten the safety of the second and third people in the line of succession as well as other legislators and staff, and to kill one and injure over 140 police officers attempting to thwart the violent domestic terrorism that was unfolding. Moreover, Trump did nothing to stop the insurrection while it was underway and gleefully watched on TV as the rioters succeeded, at least temporarily, in halting the certification of Electoral College tallies.

The nine House Managers led by Rep. Jamie Raskin of Maryland were spectacular, compelling and proficient in laying out the case in a clear precise manner. The evidence had been overwhelming as was the video footage of police officers being beaten to a pulp by the Trump insurrectionists. (What happened to Blue Lives Matter?)

It was a decisive victory of fact presentation and style over the G team – the 7th team of lawyers to defend Trump in this battle. This latest group mirrored Trump: incompetent, clownish and lying.

But the ever-shrinking GQP, a party that decidedly supports a congresswoman who ascribes to QAnon conspiracy theories, punishes competent representatives who vote their conscience and one that censures senators who vote according to facts and evidence, is still hitched to the Trump wagon.

Lindsey Graham, a senator who has lost all what remains of his credibility said after the Senate trial, “The Republican Party is alive and well.” Really?

Following the bloody insurrection, the attempted coup to overthrow our government by preventing the peaceful transfer of power—the hallmark of our democracy—the party lost tens of thousands of registered voters across the land. Unless you’re a hard core Trump loyalist, most people from both parties were sickened by the events of January 6—the third day of infamy for the U.S. 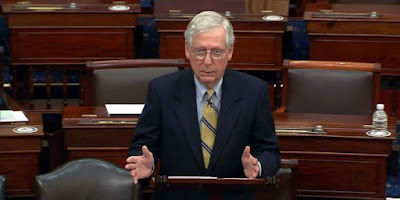 Yet, the Trump base is what Republican politicians must covet and fear to successfully ward off primary challenges as the base comprises the most reliable voters in primaries. McConnell doesn’t want any part of Trump but had to vote to acquit lest he lose his leadership position. His speech following the vote twisted him into a knot by condemning Trump in no uncertain terms for the January 6 coup attempt but used the escape hatch of “jurisdiction” as a means to justify his not guilty vote despite the Senate’s vote that rendered jurisdiction on a non-issue.

Always savvy and calculating, McConnell suggested that Trump is not out of the woods legally, which is true. But I think McConnell is trying to set a trap whereby the new Attorney General, most likely Merrick Garland, would be encouraged to investigate Trump for federal violations. If that were to occur, McConnell would cry “Democrat overreach” for investigating a former president and will fund raise and rally the GQP troops off of it.

Democrats must seize upon the Republicans’ failure to quit Trump even after the egregious January 6 event and the blatant lies Trump used over a period of months to whip his white nationalists, militia, QAnon and other components of his base into a frenzy. By no means, was the insurrection a surprise.

January 6 and Trump’s escape from any real punishment so far will not help expand the party and win over suburban and college educated voters. A break from Trump was needed by the party, but the lawmakers who supported Trump by choosing convenience over conscience will pay a steep price.

They didn’t know how to quit him, and they still don’t.

Posted by Steve Charing at 9:11 PM No comments: