Reality Check: What Not to Expect in 2008 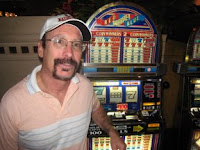 By Steve Charing
‘Tis the season that most people are brimming with optimism and high hopes that the coming year will be an improvement over the current one on various levels. While no one is suggesting that will not be the case in 2008, there are areas that require a reality check to tamp down false optimism. Conversely, those who maintain a "doom and gloom" mindset may be in for a pleasant surprise in 2008. Here are a few issues that call for a reality check:
THE SMOKING BAN WILL NOT DOOM GAY BARS. Come February 2008 much-needed relief for non-smoking bar patrons in the form of a statewide smoking ban in indoor public establishments will be a welcome arrival. While some bar owners in Baltimore have bemoaned the ban as the first step towards bankruptcy, their pessimism seems unjustified.
As I see it, smokers will, by and large, continue to patronize bars and clubs, as they don’t want to forgo the culture of the bar scene and the social outlet they provide. These folks will find a way to cope, as they have learned to make do in restaurants and in the workplace.
At the same time, people who have for years eschewed the bars, in large part because of the smoky environment, should return. And potentially new younger patrons who have avoided that atmosphere may give bars a look since there will be a healthier environment.
The result of the ban should be a net gain for the owners, and definitely for the customers and employees as well.
DON’T GET SIZED FOR A WEDDING RING YET. Despite the courageous and determined efforts of Equality Maryland and others who are seeking the legalization of same-sex marriage in Maryland, don’t expect to throw a bouquet 2008. This hot button issue is one that Democrats would prefer to avoid and Republicans want to exploit.
Naturally, Republican state legislators oppose marriage equality; it is in their DNA. But Democrats, who command a huge majority in the General Assembly, are split according to a report by The Gazette.
"It will be an issue, but I think it's an issue whose time has not yet come," said Senate President Thomas V. Mike Miller Jr. "For a law like that to move forward, there needs to be a strong body of public opinion, and I don't think it's there yet in a state of moderate temperament like Maryland."
But 2008 should be a year in which we must continue the push to educate the public on marriage equality, separate the issue from religious dogma, and keep the pressure on skittish legislators to do the right thing. In time it will pass but not this coming year.
Take heart, however, that the Dwyer-led threatened constitutional amendment banning same sex marriage won’t make it to the floor for a vote.
WAIT ‘TIL 2009 FOR FEDERAL GAINS IN GAY LGBT RIGHTS. Don’t expect to see Federal hate crimes and employment nondiscrimination legislation to be enacted in 2008. Nor will any possible repeal of the military’s "Don’t Ask, Don’t Tell" policy take place. Although public opinion is trending towards acceptance of these measures and more members of Congress are supportive, Mr. Bush and his ilk will not allow them to pass on his watch.
It’s also an election year. A better chance for passage will occur in 2009 should Americans elect a more gay-friendly president and the Democratic majority in each chamber increases.
THE GAY MARRIAGE DEBATE WILL NOT DOMINATE LIKE IN 2004. Presidential candidates from both parties will trip over themselves to boast about their devout faith. And neither party will nominate a candidate who will support same-sex marriage since there aren’t any. (Sorry, Dennis. We love you, but you’re not going to be nominated.)
Aside from Iraq, the predominate issue of the upcoming election campaign will be Immigration. This is tricky for Democrats who hope to reel in the Hispanic vote in greater numbers by advocating a more humanitarian approach with dealing with the issue. At the same time, the voters see illegal immigration as a problem. Republicans foam at the mouth like a rabid dog at the mere mention of illegal immigrants.
PULL THE LEVERS ELSEWHERE. If you are like me and enjoy playing the slot machines, don’t expect to see slots pass by referendum in 2008. Our legislators abdicated their duty by throwing the issue out to the voters.
Most Marylanders do not play slots, and there is a concerted, organized effort that crosses party lines to defeat it. Very few sympathize with the racetrack owners, so there won’t be a successful lobbying effort. States that had placed slots on the ballot have seen it lose on four out of five occasions.
People will continue to drive or take buses to neighboring states to enjoy this pastime. The downside of the defeat: taxes will have to increase again to make up for the lost revenue.
NO RELIEF FOR LOCAL SPORTS FANS. And in the world of sports, do not expect to see any relief in the Orioles this coming year. In fact, last place is almost a cinch. The Ravens are unlikely to improve upon the 4-12 season they will have had in 2007. Thank Goodness for Hopkins lacrosse.
Cheers! Despite all this, may 2008 bring good news to write about.
Posted by Steve Charing at 10:01 PM

Good point on the smoking ban. They WILL get over it, no business will be lost and we'll all be healthier for it.

But at least one Baltimore bar owner is already planning to appeal. He says he fears lost business, but most of his patrons believe it's because he can't imagine working his own four hour shift without a smoke or seven.

And if you read the Baltimore Sun this morning (Dec. 19) you'd have seen a picture of a Grand Central employee smoking. It seems that progressive and realistic bar owners are making plans to accomodate smokers in outdoor, heated tents. Fine!