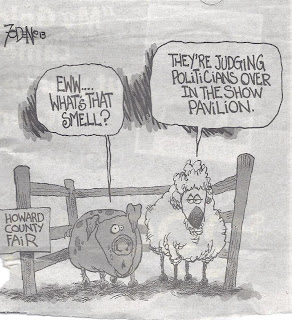 I must take exception with the editorial cartoon appearing in the Aug. 8 issue. It depicts a hog at the Howard County Fair asking, "Eww…what's that smell?" and a sheep standing adjacent to it responding, "They're judging politicians over in the show pavilion." Yucks all around. Clearly, the cartoon's point is aimed at jumping on the anti-politician bandwagon with an attempt at humor.

Without question the dysfunctional government in Washington, D.C., especially Congress, and the never- ending battles in Annapolis have soured a public with a good dose of cynicism as evidenced by recent polls. But it is unfair to paint all of our elected officials in such broad strokes to signify disdain, even from barnyard animals, for all politicians.

Before readers get riled up and say, "Geez, it's only a cartoon; lighten up," lest we forget, editorial cartoons have been a powerful visual device for newspapers to express an editor's (or board's) position on political matters since the mid-19th century though such cartoons have been in play for a longer period of time. Readers tend to view them and are influenced by them. That's why they are published.

Let's be fair. There are many elected officials in this county and elsewhere who work hard for the common good. Even those I disagree with (and there are plenty) deserve respect for their chosen path of public service, frequently at personal sacrifice, and who sincerely try to make things better for the citizenry.

Messages as portrayed in this cartoon could have an adverse impact on young people who are expected to be our leaders of the future. If the editorial board of the Howard County Times/Columbia Flier chooses to deride politicians, dedicated individuals may pursue a different route and leave those leadership positions to less-qualified folks. Moreover, the percentage of those voting is alarmingly low as it is. Don't make it worse by pouring fuel on the cynicism fire.

One of a newspaper's civic obligations is to encourage participation in the political process, not degrade it, however lighthearted the message is conveyed. If an individual elected official "stinks," by all means call him or her out. Some do, for sure, but definitely not all as the cartoon implies.

You're over-reacting. I don't admire politicians just because they choose to "serve the public". I'd actually prefer that most stay home rather than make up more absurd laws that I have to follow.

Kudos Steve, If we are to attract qualified and capable candidates to public office we need not tar and feather all of them regularly. What many have marked as a problem seems to evaporate when you talk about who represents "you". As evidenced by the incumbency rate in congress. One brush cannot, and should not, be used to categorically tarnish a single class, party, or profession. If the sign had said State Fair or larger venue it might have been less offensive, but not much. Our elected officials in HoCo, of either party, have shown a keen interest in the success of our county and people. I dare say they are a cut above the typical. Even the ones I do not always agree with!