From Bally's to Ballyhoo 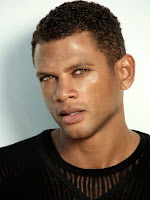 Why straight, religious model Demonta Walker embraces the LGBT community
By Steve Charing
A couple of years ago this fairly tall, well-built, exceptionally handsome man had been a manager at Bally’s Fitness on Route 40 in Ellicott City. His physique, like it was carved out of stone, was impressive enough. His personality was friendly, warm and most genuine. He was soft-spoken but engaging. And oh, those eyes!
One day, when I still was a member of that club, I summoned up the courage to suggest to Demonta (pronounced De-MON-tay) Walker that he should consider modeling. I mean this guy had everything going for him in the looks department plus he was as sweet as he could be.
It took some more prodding on my part, coupled with the encouragement from other friends and family who also saw the potential of Demonta’s posing in front of a camera lens, when he decided to give it a shot.
"At one point being in the fitness industry as a manager for Bally's Corporation, I found myself in a field that I really enjoyed along with meeting many people from every race and walk of life," he explained. "However I have always had a desire to become a bigger part of life and share a hidden talent that I was not able to do as a child growing up due to a lack of financial support."
He studied accounting at Baltimore County Community College before realizing that accounting wasn’t really his passion, although weight training, basketball and running were. Acting was a passion, too, and a dream.
The Ellicott City resident realized at the age of 35 that he would seek to capitalize on that not-so-hidden "talent" and try to enter the uber-competitive fields of hosting, modeling and acting. A devoutly religious man, Demonta calls his "talent" a gift from "the man in the heavens." Others would refer to his "talent" as strikingly good looks, but he’s too humble to say that.
Demonta has been on a fast track since he began his new career. Following some photo shoots in Florida, he has attracted sufficient attention to appear in other media. Demonta was an extra in the heralded film, Milk He has also been in a couple of TV shows, such as BET’s "Rap It Up" and VH1’s "Nick and Friends." He dreams of working alongside Will Smith one day.
Demonta has also shown up on a national advertising campaign for AT&T's Blue Room online experience. He had completed various photography shoots for Dolce and Gabbana, Kenneth Cole, Nike and Armani.
Beginning August 1, Demonta will be attending the well-known Tarsha's Acting School, located in Hollywood. He will use this opportunity to pursue one of the passions of his life—acting. "So look out Hollywood, a new actor’s coming to the silver screen," he warns.
One would think that his trek through the highways and byways of the modeling and entertainment worlds would provide Demonta with some exposure to elements of the LGBT community. It did.
"In my field and line of work, the fashion industry alone is run and coordinated by some of the world’s best designers. I have had the opportunity of going to Johnny Versace's mansion on South Beach every year for Model Week and even just for the pool parties from time to time. I have met many talented gay, lesbian and transgendered people that play a major part in the fashion world," Demonta points out.
"I must say I have a lot of respect for their talent and wisdom. In the film industry I have also met some of the most talented actors and actresses whom just happen to be gay, lesbian as well as bisexual who I will not mention. Wouldn't you just love the inside scoop?" he chuckles.
"My acceptance of the gay and lesbian community did not start because of my journey in this career," Demonta explains. "It has been instilled in me from the days of my youth." He adds, "As a straight religious man, I was raised by my loving and supportive family to believe not only in faith or a higher power, but also in ‘live and let live.’"
Demonta feels that the support he receives from the gay community plus his own understanding of how minorities should be treated will help make the world a better place. "We are all good-looking brothers and sisters in God’s eyes and in our own way, and this earth would not be our house without all of us coming together and making this a home."
Demonta’s sums up his career change this way: "Life is a journey true, but when you hit hard times in your journey it does not mean unpack. It means it’s time to change luggage and continue traveling to achieve your dreams and accomplish your goals."
That’s a good philosophy to follow whether your looks can turn heads or not.
Posted by Steve Charing at 3:40 PM

I am Demonta , The Actor/model in this article. I would like to thank you all for taking the time to read of me and allowing and wanting me to be a part of your life's...

I Do Wish You All The Best and Again,,,Thank You For All Your Support ,,,,I Will Continue To Give You All The Same.

You are one of the most humbled handsome men I've ever come across. That is such a rare combination...it's refreshing.

You are one of the most humbled handsome men, I've ever come across. That is such a rare combination....it's refreshing.

I thank you for your KIND WORDS. I would also like to leave a contact information for you and others of interest.