A First Class ‘Pygmalion’ on Display at Spotlighters

Gender and class are issues that permeate throughout much of today’s political discourse. Yet, in 1912 when famed controversial Irish playwright George Bernard Shaw penned arguably his most beloved work, Pygmalion, he saw the play as a vehicle to shed light on those very topics, which took aim at the mores of London society during the Edwardian era.

In a superb presentation at the Spotlighters Theatre, Shaw’s views through Pygmalion come to life with a potent drama laced with razor-sharp wit and humor.  Spotlighters veteran director Sherrionne Brown aided by Assistant Director Phil Gallagher who is also the Dialect Coach and for good measure plays a leading role, helms a sterling iteration of the play that is performed by a talented cast.

Pygmalion was the inspiration for the Broadway classic musical and Oscar-winning film My Fair Lady. The play, of course, does not contain the majestic score of Frederick Loewe or any score for that matter, but some of the dialogue is recognizable to those familiar with the musical in that it is incorporated in Alan Jay Lerner’s lyrics while the plot is very similar in both versions.

Named after a Greek mythological figure, Pygmalion fell in love with one of his sculptures which came to life. That is the symbolic journey in the play whereby Henry Higgins, a professor of phonetics takes in a poor London flower girl, Eliza Doolittle, with even poorer speaking skills and mannerisms.  She had initiated the contact so that she can learn to improve her speech in order to better sell flowers.

Through the resolute efforts of both he and his cohort, Colonel Pickering, a gentleman who also shares an interest in phonetics, they gave her new clothes and took on the challenge of improving Eliza’s speech and her mannerisms with the goal of transforming her into a duchess worthy of the company of high society. Pickering bet that if they can triumph, he would pay for all the expenses.

However, after this experiment was successfully completed, Higgins showed no further interest in Eliza and appeared ready to discard her without the slightest concern for her future. If Higgins had a soft spot, it was well hidden.  Eliza wondered wistfully what’s to become of herself.

But in the play’s denouement, Eliza finally stands up to the boorish professor and establishes her own independence—the more significant transformation in the story—and in the process, gained the respect of Higgins and perhaps winning his heart.

The aforementioned Phil Gallagher is sterling as Henry Higgins, the play’s Pygmalion.  Polished and accomplished, Mr. Gallagher dominates the stage with a powerful resonance that would make the late Rex Harrison applaud. Moreover, his facial expressions, body language, voice inflections and purposeful movements around the stage are on target in portraying this loutish character.  Mr. Gallagher is excellent in delivering the comical sarcasm and insults leveled at Eliza as well as demonstrating his exasperation and frustration.

Equally strong is Linae' C. Bullock who is first-rate as Eliza. She conveys the smart-mouth, shrieking “guttersnipe” as Higgins labeled her and demonstrates the ability to carry off the conversion to a potential duchess to a tee changing accents adroitly. Her passionate stance to declare her self-worth and independence near the play’s conclusion is a master stroke of acting on the part of Ms. Bullock.

Randy Dalmas does a fine job in playing the more reasonable and compassionate Colonel Pickering. Where Higgins berates and bullies Eliza, Pickering is more thoughtful and considerate to her and is the personification of a gentleman. He is the perfect foil to Higgins, and Mr. Dalmas pulls it off.

As Higgins’ housekeeper Mrs. Pearce, Jennifer Grundy Hollett performs convincingly without going over the top. Seen mostly during the first half of the five-act play, the character at times consoles Eliza and on other occasions threatens her with delicious campiness. Not intimidated by her boss Higgins, Ms. Hollett’s Pearce demonstrates her independence and strength and chastises Higgins’ own foibles that include, among other things, his frequent and ill-timed swearing and sloppy table manners. It’s a fun-filled role and Ms. Hollett nails it.

Rich Espey plays the part of Eliza’s eccentric father Alfred Doolittle, a former dustman who eventually becomes wealthier. He’s a thinking man who “seems equally free from fear and conscience.” It is through this character that Shaw seems to convey much of his social criticism.  The complex role is played very well by Mr. Espey.

As Higgins’ upper class mother, Hillary Mazer plays the part with relish.  Stately Mrs. Higgins, very independent and a stalwart of London’s society, never bought into her son and Pickering’s experiment with Eliza and doesn’t have much respect for Henry.  Ms. Mazer’s acting skills allow this disdain to come through effectively. 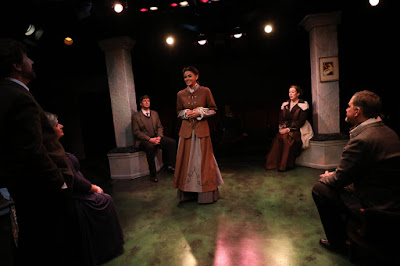 The cozy in-the-round square-shaped stage at the Spotlighters is perfect for a play such as Pygmalion. The inherent intimacy of the environment allows the audience to be interested eavesdroppers to the conversation with the performers merely a few feet away.  Outstanding period costumes by Jenifer Grundy Hollett reflecting the garb of both the lower class and upper crust of Edwardian Londoners contribute mightily to the presentation.

Sherrionne Brown’s set design provided sufficient furniture and accessories to augment the scenes without causing clutter on the stage and which allow the actors to move about freely. Brad Ranno’s lighting design also enhances the atmosphere while stage manager Lady Tatum oversees the multiple scene and act changes that occur fluidly and efficiently.

The Spotlighters’ production of Pygmalion is extremely well-performed and staged and is worthy of a Bravo! It should not be missed as this is community theatre at its best.

Running time. Two hours and 45 minutes with an intermission.

Posted by Steve Charing at 9:37 PM