A Rocking ‘Rock of Ages’ Rocks the Hippodrome

It may as well have been a 1980’s rock concert sans illegal substances: mind-blowing, hand-clapping rock music with an infusion of metal; multi-hued strobe lighting; fog effects; long flowing hair and an audience totally into it and eager to sing along to the songs.  That’s what occurred during the first of only three performances of the superb production of Rock of Ages, making its way-too-brief stop at the Baltimore Hippodrome Theatre as part of the show’s 10th Anniversary tour.

Indeed, it was a raucous audience the evening the production was reviewed, the likes of which not seen at the Hippodrome in my memory. Perhaps the electric atmosphere was a bit too intense for one theatre patron who became ill necessitating a 15-minute interruption at the midway point of the first act. Undaunted, the highly professional company and technical crew resumed without missing a beat and the show rocked on with enormous intensity leading to a crescendo of cheers, howls and an explosive standing ovation by the audience at the show’s end.

There have been dozens of popular jukebox musicals—Mamma Mia!, Beautiful, Jersey Boys, Escape to Margaritaville, On Your Feet, to name a few—that showcase a particular individual or group. In the Tony Award nominated Rock of Ages, another jukebox musical, you have a show which focuses on multiple acts and performers, but in particular, an era and genre—the rocking 1980’s.

The cute love story that unwinds and often hilarious subplots from a book by Chris D’Arienzo are embedded in a catalogue of classic rock ‘n roll and heavy metal songs and performances by a stellar cast and musicians.

Music from Journey, Styx, Whitesnake, Bon Jovi, REO Speedwagon, Foreigner, Starship, Pat Benatar, Twisted Sister and others tie in neatly to the story. It’s pieced together so well that often the first line of a song immediately follows the last line in a dialogue eliciting laughter.

Set in 1987, Anthony Nuccio plays Drew, an employee in the Bourbon Room, a bar on Hollywood’s Sunset Strip, who falls for an innocent girl from Kansas named Sherrie played by Katie LaMark.  (You just know that the song “Oh Sherrie” will surface at some point.)  Their desire and pursuit of a romantic relationship forms the central plot but there are other humorous storylines going on that supplement it.

Mr. Nuccio, rocking a sleeveless vest throughout most of the show, was obviously able to locate gyms in the various cities on the tour. Unlike prototypical front men rockers of the day who generally are pencil thin, Mr. Nuccio is built more like a linebacker.

As Sherrie, Ms. LaMark is spot-on who is also dreaming of being a star.  At a picnic on a hill overlooking Los Angeles, Drew drops the f-word—friends—and that was that.  She mistook his desire to be simply friends and not looking for a serious relationship. Sherrie was so disappointed she pursues other options.  This innocent young lady winds up becoming a performer in the Venus Club—a strip joint, er, gentleman’s club, as many aspiring stars wind up doing.

Ms. LaMark possesses a strong rock belt voice and excels in several group numbers. They include “More Than Words/To Be with You/Heaven,” “Waiting for a Girl Like You,” “Wanted Dead or Alive,” “Here I Go Again,” “Anyway You Want It,” “Renegade” among others.

John-Michael Breen plays Lonny, who also works at the Bourbon Room and serves as the show’s narrator whereby he immediately endearing him to the enthusiastic audience. Charming and comedic, mischievous and fun-loving, Mr. Breen plays the role to the hilt.

Ryan M. Hunt plays Dennis, the owner of the Bourbon Room. A laid back former rocker, Mr. Hunt’s portrayal is excellent and a perfect complement to the Lonny character.  Together they perform well in “Just Like Paradise/Nothin’ But a Good Time” that opens the show. But it is their ultra-hilarious second act duet in “Can’t Fight This Feeling” that shines as one of the production’s show-stopping numbers.

In the role of bad boy Stacee Jaxx, a charismatic rock star who decides to leave his successful metal-rock band Arsenal to try it solo, Sam Harvey performs quite effectively with an abundance of pizzazz. Like Anthony Nuccio, Mr. Harvey also sports a chiseled physique and is not shy about flexing his biceps and flashing his abs. Stacee is one of the story’s villains who does some naughty (and illegal) things, and Mr. Harvey’s comedy and acting skills shine as he pulls it off perfectly.

His vocals are superb in “Wanted Dead or Alive” and “Here I Go Again.” But it is his performance in “I Wanna Know What Love Is” with Ms. La Mark where the two characters are copulating in a men’s room that becomes yet another show-stopping laugh-a-second number. 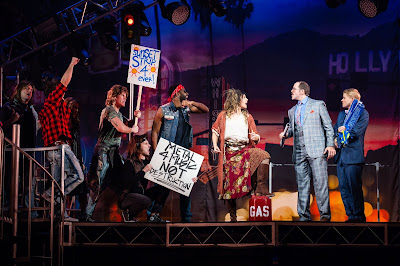 Andrew Tebo plays Hertz, a cold-hearted German developer who is trying to buy up the Sunset Strip to eliminate the sex, drugs and rock ‘n roll lifestyle and bring in what he calls “clean living” to the area. Of course, the Bourbon Room is a target.

His flamboyant son Franz is played  by Chris Renalds. Campy Franz wishes to open his own candy store in Germany but is intimidated by his strong father until things change over the course of the show. His line, “I’m not gay, I’m German” is uproarious in its delivery.

Proficient vocalists, they appear together in several numbers, such as “We Built This City/Too Much Time on My Hands” and “Every Rose Has Its Thorn.” Mr. Renalds excels in “Hit Me with Your Best Shot” when Franz finally stands up to his father. For his part, Mr. Tebo is charming in one of the show’s rare solos, “Keep On Loving You.”

An excellent performance is turned in by Kristina Walz as Regina (rhymes with angina) as the mayor’s assistant who, through energetic protests, is fighting to save the Strip.  She and the ensemble heartily deliver “We’re Not Gonna Take It” and “The Final Countdown.”

Also performing well is Kenya Hamilton as Justice, the owner of the Venus Club.  A former performer, Justice provides soothing advice to Sherrie and demonstrates proficient acting abilities in the process.

The remainder of the cast and musicians support the leads exceptionally.

The rousing finale "Can't Stop Believing" effectively symbolizes the entire messaging contained in the story.  And with that, hopefully, Rock of Ages will return to Baltimore in the near future to afford the opportunity to enjoy a lively, nostalgic, highly entertaining production performed by a rock-solid company.  Rock on!

Running time. Approximately two hours and 20 minutes with an intermission.

Advisory. Rock of Ages contains adult language and adult situations and is not recommended for young children.

For a look at the tour’s upcoming schedule, visit the Rock of Ages tour website.

Posted by Steve Charing at 5:09 PM