Yo, ‘Rocky’ at Toby’s is a Fight to the Finish 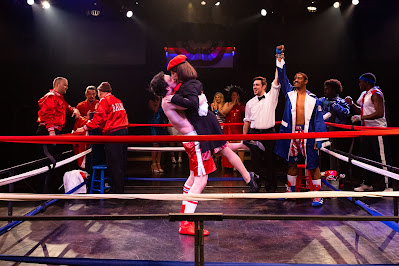 I have to admit that when I saw Toby’s ad for Rocky that showed the legendary Toby Orenstein sporting boxing gloves surrounded by two boxing pugilists, I fantasized that she would climb in the ring during the show and swing away at an opponent. Alas, that was not the case and lucky for her potential opponent. But there are enough punches flying around the stage to make you feel you’re at the Oscars.

Indeed, Rocky, the musical version of the 1976 Oscar-winning film (Best Picture) with the same title has made its way to Toby’s Dinner Theatre. The musical iteration of Rocky features a score composed by Stephen Flaherty with lyrics by Lynn Ahrens. The book was penned by Thomas Meehan and Sylvester Stallone. The latter wrote the story for himself as he starred in the mega-hit.

From the outset I was concerned how the intimate in-the-round theater would do justice to a production that involves many set pieces and scene changes, not to mention a boxing ring. But as the creative team at Toby’s does time and time again, they come through with flying colors. I had the same apprehension about Toby’s putting on such spectacles like In the Heights, Fiddler on the Roof, Grease, Les Miserables, Newsies and a host of others. Someday I will finally learn that no show is too big for Toby’s.

Under the meticulous direction of Helen Hayes Award recipients, the aforementioned Ms. Orenstein and Mark Minnick, the production of Rocky with a talented cast and excellent staging lands a good punch.

The familiar feel-good story that graced the screen back when Gerald Ford was president and spawned a zillion sequels centers on local club fighter and “enforcer” for a loan shark from South Philly, Rocky Balboa, known as “The Italian Stallion” in the ring. Not that educated and with no apparent career path in his late twenties, he struggles to find love as well as the confidence he needs to excel in boxing, the only thing he really knows.

"...the production of Rocky with a talented cast and excellent staging lands a good punch."

Rocky gets a proverbial kick in the rear by a retired and oft-injured boxer Mikey who hates to see the promising fighter waste his life. In trying to get a job as a sparring partner for Apollo Creed, the reigning heavyweight champion, Rocky receives an unbelievably lucky break when a boxing promoter convinces him to actually fight the champion and would stand to earn 150,000 smackeroos, win or lose. That’s about $750,000 in today’s money.

Initially, Rocky had doubts about it despite his winning against record against lesser opponents at the club. But enters Mikey who convinces him that through intense training he can be successful instead of being KO’d in the first minute of the first round. So, Rocky trains hard, real hard.  As a huge underdog, he winds up fighting Apollo Creed for the heavyweight championship, gets national attention in the process and finally achieves the confidence level he never had.

Rocky also finds his love along the way. Smitten with a pet shop saleswoman, Adrian, who sold him his two pet turtles, Rocky pursues her relentlessly on the encouragement of her mean brother Paulie. Shy and meek and also lacking in confidence, Adrian eventually falls for the diamond-in-the-rough.

Given the fact the Flaherty-Ahrens team wrote Ragtime and Once on This Island and Seussical winning multiple Tony and Grammy awards, I had expected more from them. The melodies of most of the songs are not memorable but the lyrics helped bring the story along. Nonetheless, there were pieces of “Gonna Fly Now” sprinkled around and “Eye Of The Tiger” during the Training Montage—both from the Rocky film to lend familiarity.

The songs were performed competently by the leads and ensemble, however, which matters most. They were well-supported by conductor Ross Scott Rawlings and his five-piece orchestra. Nathan Scavilla leads the orchestra on other performances.

Making his Toby’s debut, Clarksville’s own Patrick Gover is stellar as he is called on to carry much of the show on his broad shoulders while maintaining a commanding presence on the stage. Possessing rugged handsomeness and a well-trained physique, Mr. Gover plays the Fonz-like Stallone role to a tee.

Rocky’s thick Philly steak sub accent must be maintained throughout, and Mr. Gover delivers. He often approaches the edge but does not truly go over the top with his dialect. “Yo, Adrian,” you hear a lot.

Mr. Gover whose singing voice is as muscular as his frame, is quite adroit in maintaining that accent even while he belts out songs. His rendition of “Fight From The Heart” is one of his best where he demonstrates his ability to hold a long note. He also excels in “Keep On Standing.” Remember, Stallone never had to sing.

Mr. Gover as an actor is convincing in unearthing a soft spot from under his tough exterior.  Oozing with charisma and possessing a ton of charm, you can't help but root for him.

His scenes with Adrian, played by Lydia Gifford who is also making her Toby’s debut, are tender and they both demonstrate solid onstage chemistry.

But it is a physical role and a demanding one at that.  During Rocky’s training sequences, the obviously fit Mr. Gover must jog around the stage, sprint across the stage and back, run up the iconic stairs at the Philadelphia Museum of Art (talk about a set piece!), do a series of pull-ups, take whacks at various punching bags and a hanging side of beef, down three raw eggs and then box in the climactic action-packed 15-round bout. Whew! Mr. Gover pulls it all off like a true champion.

For her part, Ms. Gifford conveys the low-keyed Adrian well. However, when there are such disparate personalities, such as Rocky and Adrian performing opposite one another, duets can be a challenge. “The Flip Side” and “Happiness” come to mind as songs where Mr. Gover’s big voice tends to overpower Ms. Gifford’s in spots. She performs a lovely solo in the moving number “I’m Done.” 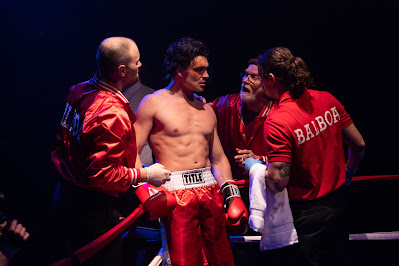 The always reliable Robert Biederman takes on the Burgess Meredith role of Mikey from the film version complete with stocking cap. He demonstrates his sincerity in pushing Rocky to reach new heights and helps train him for the big fight. Mr. Biederman performs well in his solo “In The Ring.”

As Apollo Creed, Gerald Jordan is also on the mark. He takes the ring with flamboyance and fanfare following the introductions and executes the boxing sequences with Rocky flawlessly.

A big round of applause goes to the creative team for the climactic title match. Using a portable boxing ring, the fight choreography by Justin Calhoun and the fight training by Title Boxing Club of Columbia, the battle between Rocky and Apollo comes off as authentic as can be. Both Mr. Gover and Mr. Jordan bobbed and weaved, ducked and punched in the ring realistically. They even drew “blood.”

Various methods are used to augment the scene, such as lighting blackouts to denote rounds not shown and slo-mo effects to focus on the blows landed.

Other techniques throughout the production are also meritorious. For example, hand-held cameras are employed during interviews and the fight introductions with images reflected on monitors on the walls around the theater.

Credit David A. Hopkins for the imaginative scenic design, Lynn Joslin for the effective lighting design, Janine Sunday for the costumes especially the boxing garb, and Mark Smedley for his sound design that uses an echo effect from a hand mic to portray the introductions on a PA system. Well done, all.

It’s difficult to buy tickets to a championship title bout, let alone ringside seats. But at Toby’s the entire audience has ringside seats at a tiny fraction of the cost. And a delicious buffet is added on for more enjoyment.

Yo, come to this one and enjoy a round or two of the drink special, “The Italian Stallion” and 15 rounds of pure fun.

Rocky punches through June 5 at Toby’s Dinner Theatre, 5900 Symphony Woods Road, Columbia, MD 21044.  Tickets may be purchased by calling the Box Office 410-730-8311 or visiting here as well as Ticketmaster.

Posted by Steve Charing at 1:01 PM