Presumptive Democratic nominee Joe Biden already narrowed the field of potential running mates last month when he pledged to select a woman. For those who had hoped that Beto O’Rourke, Pete Buttigieg or Julián Castro among others to be selected will have to wait for another shot with this revelation.

The names of several prominent women have emerged as potential candidates including Senators Amy Klobuchar, Kamala Harris and Elizabeth Warren as well as Michigan Governor Gretchen Whitmer.  Except for the latter, all of these women vied for the nomination and all had dropped out of the presidential race and endorsed Biden. All would be outstanding running mates. And all indicated they would accept the number two spot if asked.

But the former gubernatorial candidate in Georgia, Stacey Abrams, would be the best pick to help defeat the increasingly defective and dangerous Donald Trump.

For her part, Abrams is unabashedly lobbying for the post, which is a break from traditional waltzes the nominee and prospective running mates dance to leading up to the selection.

“I believe in doing the work,” she said on Meet the Press on Sunday. “I’ve been doing it since the day I did not become governor and I will continue to do so. And I do so at a national level.”

She added, “As a young black girl growing up in Mississippi, I learned that if I didn’t speak up for myself, no one else would, so ... my mission is to say out loud if I’m asked the question, 'Yes, I would be willing to serve.’”

Since Biden is in his late 70’s, a vice presidential candidate takes on added importance. Though she lacks significant executive experience other than leading the Fair Fight national organization aimed at combating voter suppression, Abrams is the best choice. Fair Fight grew out her contested razor-thin loss to Brian Kemp in the Georgia gubernatorial race whereby alleged voter suppression most likely determined the outcome.

The number one priority among Democrats is to defeat Donald Trump. an already impeached president. One could only imagine what a second Trump term would do to the country and the world given his penchant for vindictiveness and incompetence. At a time of a worldwide pandemic, Trump’s performance is shockingly inept and frightening.

Despite Trump’s numerous foibles, his approval numbers continue to reside in the 40’s when they should otherwise be dipping into the low 20’s. His stubbornly loyal base sticks with him through thick and thin, and there has been scant evidence that his support peeling off, according to polls.

Trump defeated the far more qualified Hillary Clinton in 2016 with similar numbers. Therefore, it behooves the Democrats to take nothing for granted, dot every i and cross every t to defeat Trump.
With Stacey Abrams on the ticket, Biden’s chances improve. Abrams will excite the African American base especially women who are the most reliable Democrats and they do vote in large numbers. Imagine if that energy among African Americans during the 2016 election existed in cities like Philadelphia, Detroit and Milwaukee. Trump would have not won the battleground states of Pennsylvania, Michigan and Wisconsin, and we wouldn’t be in this position today. 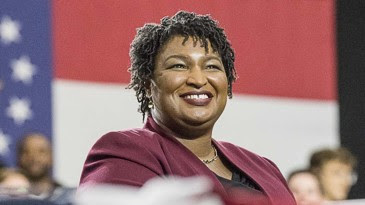 Her selection should warm the hearts of Bernie Sanders supporters, which would further unify the party and the ticket.  Biden needs a vast majority of these supporters, especially young voters, if he is to succeed. Abrams being three decades younger than Biden would go a long way.

Electorally, this excitement provided by the charismatic Abrams as the vice presidential candidate could put Georgia into play as well as North Carolina, Florida and even Texas. Down ballot, she could help the Dems as Georgia will have two open Senate seats. And there is an open seat in South Carolina; it’s time for Jamie Harrison to defeat Trump sycophant Lindsey Graham. A massive African American turnout there could do the trick and provide help for Doug Jones in Alabama.

In March a poll conducted by Data for Progress, a progressive think tank, showed that a Biden-Abrams ticket would match up best against Trump-Pence. Joe Biden would not be in this position were not for the strong support he’s received from African Americans and especially the game changing endorsement from Representative Jim Clyburn.

To defeat Trump, Democrats will need to turn out in large numbers. Biden-Abrams: that’s the ticket.

Posted by Steve Charing at 4:30 PM