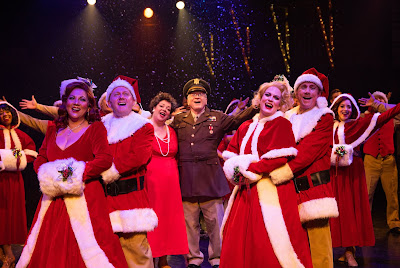 With troubled times like these, no one could be blamed for longing for a simpler, genteel era. This welcome diversion can be currently found at Toby’s Dinner Theatre with its completely entertaining production of Irving Berlin’s White Christmas.

Under the precise direction of Helen Hayes Award winner Mark Minnick, stunning choreography by Christen Svingos, able musical direction by Ross Scott Rawlings, a lovely and familiar score, an abundantly talented cast and great visuals, this production of White Christmas  is a dazzling nostalgic escape to the good ole days.

The musical stage production is based on the 1954 movie of the same title that starred Bing Crosby and Danny Kaye as well as Rosemary Clooney and Vera-Ellen. The popular music and straight-forward lyrics were composed by Irving Berlin with the book penned by David Ives and Paul Blake.

White Christmas has been both praised and criticized for its simplicity. But I like simple as long as there is talent, and Toby’s production has that. To be sure, there are a few slow spots during the show, but that is overcome readily by the performances.

Mounting any musical on the tight stage of Toby’s and in the round no less is a daunting challenge. But just like so many other musicals in Toby’s long and distinguished history, this production of White Christmas meets that bar and then some.

The staging is magnificent, efficiently using all levels and floor space. By dint of the creative and functional scenic design by David A. Hopkins and the gorgeous lighting design by Lynn Joslin, the show plays large and makes the viewing that much more pleasurable.

Though set in the 1950’s the music and choreography seem timeless and upbeat. It didn’t hurt that the first number was that Christmastime standard “Happy Holiday”—popularized by Bing Crosby and Andy Williams—that has you humming from the get-go.

The show opens up, however, not in the 1950’s but 1944 where Bob Wallace and Phil Davis (played by Toby’s dynamic duo of Jeffrey Shankle and David James, respectively), then two GI’s, were singing and dancing to cheer up the troops stuck in war-shattered Europe on Christmas Eve. It is here the title song “White Christmas” first appears in the show.

The next scene takes place 10 years later at the Ed Sullivan Show where the fellas continued what appeared to be a successful song and dance act and perform “Happy Holiday/Let Yourself Go,” which features solid choreography.

From there the guys—skirt-chasing Phil and his more cautious buddy Bob—pursue the Haynes sisters, another singing duo. Judy Haynes, played by Alicia Osborn, and Phil hit it off early on despite Phil’s wandering eyes. Betty Haines (Janine Sunday) and Bob struggle to connect.

They travel by train to the Columbia Inn in Vermont owned by the guys’ former Army commander who has fallen on bad luck, General Henry Waverly (played by Robert Biedermann).  The gals were on their way to perform in a Christmas show. Bob thought they were heading to Miami resulting in some funny moments.

We’ll leave it there as the familiar 1954-type theme boy meets girl, boy loses girl, boy gets girl back provides one of the key threads in the show’s plot as does the ensuing zaniness. Also, how the General’s old troops helped save the day provides the show with an emotional uplift.

"a snow globe filled with artistry"

Popular standards, such as “Count Your Blessings Instead of Sheep,” “I Love a Piano” and “How Deep is the Ocean” are filled with joy and nostalgia. The Finale had the entire company (and audience) singing “White Christmas.” Then as an encore number, they all perform “I’ve Got My Love to Keep Me Warm” as snowflakes drifted down from the ceiling. Beautiful.

Jeffrey Shankle as Bob is fabulous as usual. He showcases his brilliant, pitch-perfect tenor voice and solid acting chops, which he carries out with flair. Mr. Shankle is the featured singer in many of the show’s numbers with “Count Your Blessings Instead of Sheep,” “Sisters,” “How Deep is the Ocean” and “The Old Man” being highlights. And when he and the superb Ensemble perform “Blue Skies” with its spin moves and kicks to close out the first act, it is a high point in the show.

Another Toby’s veteran is David James reprising his role from 10 years ago. The two-time Helen Hayes winner plays Phil beautifully with fine singing and dancing performances, and he adroitly throws in his well-timed, clever lines. In a duet with Alicia Osborn as Judy in “The Best Things Happen While You’re Dancing,” Mr. James shines brightly.

Both Janine Sunday (also reprising her role) and Alicia Osborn as the Haynes sisters are terrific and play off the male leads with precision. As the strong-willed and independent Betty, Ms. Sunday is on top of her game. As the charming and lovely Judy, Ms. Osborn is ideal for the role.

Vocally, one couldn’t ask for better. For instance, Ms. Sunday’s duet with Mr. Shankle in the reprise of “How Deep is the Ocean” is stunning.

Jane C. Boyle, as Martha the inn’s outspoken concierge, is sensational (again). Returning to her role she performed 10 years ago at Toby’s, Ms. Boyle never misses a beat.  Possessing comedic timing and powerful stage presence, Ms. Boyle provides the show an added punch. Her rendition of “Let Me Sing and I’m Happy” really hits the mark. It is a pure delight to see Ms. Boyle back on the Toby’s stage.

Another standout is veteran actor Robert Biedermann who plays General Henry Waverly to a tee. Kind and lovable the General had fallen under hard economic times with his inn. Mr. Biedermann conveys this situation movingly so that the audience finds it easy to is root for him.

Then there is young Susie, the General’s devoted granddaughter played on the night this performance was reviewed by Nina Brothers. (Anna Jachero and Ava Rose LaManna play the role in other performances.)

In this performance, Nina sparkled playing the feisty, lovable youngster who had her moment in the spotlight with a gorgeous rendition of the reprise of “Let Me Sing and I’m Happy.” The song is intended to convince the Christmas show’s organizers at the inn that she can perform.

Other notable performances are turned in by DeCarlo Raspberry as the boisterous and spirited TV Announcer and Christmas Show Director; and Justin Calhoun as Ralph Sheldrake, the former Army buddy of Bob and Phil and now executive fresh off his leading role in Godspell.

The Ensemble hoofed it up skillfully with lots of energy and graceful movement to the tuneful songs. Credit Choreographer Christen Svingos for effectively designing the playbook, allowing the dancers to show off their talents on a tight stage.

“Happy Holiday/Let Yourself Go” featuring Mr. Shankle, Mr. James and the Ensemble is a treat. Mr. James and Ms. Osborn are graceful in the lovely number with the fitting title, “The Best Things Happen While You’re Dancing.” But the show stopper is the rousing second act opener “I Love a Piano” that features a scintillating display of tap dancing talent by the Ensemble, reflecting extraordinary choreography by Ms. Svingos.

As mentioned previously, Scenic Designer David A. Hopkins employs clever scenery and set pieces to add heft to the production. Such varied scenes include the inn, a train ride, a ballroom, a TV studio among others. The best is the lobby of the inn with a front desk, a neatly decorated staircase leading to the inn’s rooms, and an A-frame ceiling that helps provide that traditional inn look.

In addition to her leading role in the show, Janine Sunday is also the Costume Designer. With well over a hundred pieces of wardrobe employed that ranged from period formal gowns to Army uniforms and much in between, the costumes are a significant element in the show’s visual appeal.

And Mark Smedley’s solid sound design helps make the performances that much better.

This is a special show for a special time of year, and a good one for the entire family. With a high-energy, talented cast performing Irving Berlin music and a skillful crew, White Christmas at Toby’s is a snow globe filled with artistry that brings out the best in musical theatre and is the present you may be looking for.

Posted by Steve Charing at 1:48 PM