Don't Let Them Fool You 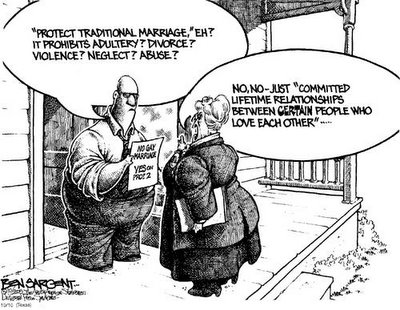 Now that a Baltimore Circuit Court judge ruled against the constitutionality of Maryland’s marriage law that limited marriage to heterosexual couples only, the rhetoric supporting a constitutional amendment has begun in full force.

Immediately following the ruling the anti-gay forces have been marshalling their resources and allies to strike fear in the minds of the citizens of Maryland and press for a constitutional amendment that will define marriage as the province solely of heterosexuals. In fact, "The Marriage Protection Act" (House Bill 48), introduced by homophobe Donald H. Dwyer, Jr. (R-Anne Arundel) and co-sponsored by over 30 legislators, is designed to do just that—and more.

In a sweeping bill targeting gays and lesbians, all same-sex relationships including domestic partnerships and civil unions would also not be recognized by the state. The Senate version, Senate Bill 262, has been introduced by Sen. Janet Greenip, also of Anne Arundel County, to cross-file the house version.

"Now more than ever, we need to pass the Constitutional Amendment to protect marriage," the clarion call from Dwyer’s website said. But don’t be fooled. The demagoguery isn’t about protecting marriage.

If these politicians were so keen on protecting marriage there would be some effort—perhaps criminalization—that targets those responsible for children born out of wedlock. Don’t the religious right keep reminding us that the goal of marriage is procreation? Well, if couples procreate without the official union, they are circumventing marriage and thus, undermining it.

Of course, there are married couples who cannot have children or who do not wish to have them. Those marriages, if we follow the logic of the "protect marriage" crowd, should be deemed null and void.

And how would two men getting married keep others from having children? Some even blame gays for abortion! It’s pure nonsense.

Moreover, there are other gnawing factors that chip away at the foundation of marriage: poverty, domestic violence, single-parent households, a lack of healthcare, and adultery top the list. But you won’t see demonstrations against those maladies too often, not to mention constitutional amendments.

And don’t pay any attention to the "biblical scholars" who maintain that traditional marriage has always been between one man and one woman. Just check out the Book of Genesis where men, including Abraham, typically had five wives.

Then there is the popular "homosexuals are sinners" argument. Please. So are murderers, but they can marry. So can men who shave or women who wear blended fabrics. They’re sinners, too, but they can marry. These are lame, selective and bogus excuses to discriminate. The Bible thumpers also tried to use cherry-picked passages from Scripture to prevent interracial marriages.

With all this fire and brimstone rhetoric going on, is protecting marriage the true aim? No, because marriage can take place in a civil or secular environment, such as a courthouse and religious institutions are not forced to marry same-gender couples.

The last thing the conservatives want is to grant gays equal footing with straight people. The notion that gays and lesbians can be married similarly to heterosexual couples is icky to them. They can hold their noses and swallow some anti-discrimination measures, but marriage is off the table.

To many of our opponents, the "homosexual lifestyle" is anathema. Whether we are born gay or not, the sexual activities are considered abhorrent and behavior-oriented. They still see the lgbt community through the lens of the outrageous images that pride parades produce. It’s always the shocking fetishes and attire they point to and use for fundraising as well as to scare mainstream politicians and voters whom otherwise might be supportive of equality.

The rallies, the sound bites, the pronouncements from the opposition are politically motivated and bigotry-driven To many of these adversaries, the lgbt community is comprised of sub-humans not worthy of marriage—religious or civil.

What is being ignored by those who feel the need to "protect marriage" is the fact that other countries have moved forward in their social thinking. Canada, Spain and South Africa have joined several European countries in legalizing same-sex marriage. Has the institution gone by the wayside since? Not hardly.

Closer to home, Massachusetts, the only state where same-sex marriage is legal, is again in the crosshairs of extreme conservatives who are attempting to overturn the court’s decision. Where they are lacking is the fact that the institution of marriage has not been adversely affected since gays and lesbians tied the knot in 2003. In fact, Massachusetts has the lowest divorce rate in the country. Therefore, heterosexual couples in the Bay State did not rush to seek divorce attorneys once gays and lesbians got hitched.

The Massachusetts case brought out a new entry into the lexicon: activist judges. To conservatives, activist judges are those who decide cases in a way that are unfavorable to the right. They had no trouble with activist judges when they anointed Bush president in 2000, and they sure will not rail against them when the new Supreme Court overthrows Roe v. Wade.

Expect the anti-gay rhetoric cloaked in defense-of-marriage smokescreens to play out in the weeks ahead, as these folks would like nothing more than to get the issue on the ballot in November. Republicans are solidly behind the amendment because they want the election to be about "gay marriage"—a convenient distraction from the record of GOP candidates and to put Democrats on the spot. They want very much to create a wedge issue to divide Democrats and their supporters.

By doing so, more conservative voters will flock to the polls a la Ohio and help the GOP in the election. They’re trying to fool everyone into believing that it’s all about protecting marriage. It’s not. It’s about the politics of homophobia.

One way to combat that is to make an impression on wavering legislators. Please contact yours. Lobby Day in Annapolis on February 13 is a crucial event that is aimed at presenting our side. Your participation is greatly needed. Please check out the Equality Maryland website at www.equalitymaryland.org for more information.

Posted by Steve Charing at 2:03 PM