‘Boys Will Be Boys’ on Sizzling Atlantis Cruise 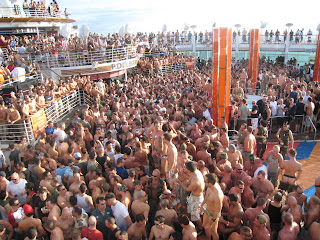 After experiencing two straight cruises, my partner and I decided to try a "gay cruise" and signed up with the folks at Atlantis. Chartering the Royal Caribbean’s "Freedom of the Seas"—currently the largest cruise ship of all—Atlantis managed to jam some 3,600 passengers to sail for a week at the end of January that departed from Miami and covered the ports-of-call of Labadee (Haiti), San Juan and St. Maarten.

With a handful of exceptions, the passengers were all gay men, representing a vast array of ages, body types, and personalities, and they hailed from all over the U.S. and 24 foreign countries. Most were couples, but in many cases you would not know it.

The alleged incidents of sexual liaisons on the ship’s top deck in the wee hours of the morning and the "popularity" of the steam room adjacent to the gym made for colorful gossip and chatter. As a way of reinforcement, these activities were acknowledged and made light of by the two hilarious cruise directors and entertainers. In fact, most of the comedians on board included this phenomenon as part of their material.

Those who are still trying to secure marriage equality may feel discouraged by the fact that "boys will be boys" and wonder if gay men seriously want to make a lifelong commitment through marriage.

Putting that aside, the differences between a gay cruise and a straight cruise are as stark as say, being gay or straight. For example, on a straight cruise, a hot body on a man might be one in which his belly doesn’t protrude through his beater. On this cruise, there were several hundred who seemed to fall off the pages of fitness magazines and materialized into passengers. A large number of these donned Speedos sporting their own version of a stimulus package.

I haven’t seen so many six packs since my last visit to a liquor store. And not all of them were in their twenties. There were plenty of hard, ripped bodies shown off by men in their 40’s 50’s and yes, even 60’s, so take note.

To that point, on a straight cruise one can routinely enter the ship’s expansive gym and use the workout equipment without any delays. On this gay cruise, you’d almost have to make reservations just to enter it with so many gym bods on board. Indeed, it was fairly crowded even at 7 in the morning!

On a straight cruise there will be daily or nighttime dances and parties on the pool deck. And they can be fun. But please…do NOT attempt to compare them with these events on a gay cruise. OMG!

The "Dog Tag" party was smoking hot. You want gays in the military? Well here they were in their olive-colored garb with lots of flesh displayed. There was also a disco party with imaginative and colorful costumes to reflect the era. An undersea party took place in the indoor ice rink (that’s right, an ice rink) where it was so crowded and shirtless you were eventually doused by the sweat of all the men around.

And the crème de la crème of all parties: the notorious "White Party"—billed as the largest such event in the world. By the look of the exceptional and creative white costumes (well, a lot were just clad in tighty whities or less), one would think every big-name fashion designer was on board. To say the costumes were amazing is like saying the ocean is wet. And the soiree lasted until 11 the next morning (from what I was told!).

In all of these parties, the guest DJ’s were spectacular and kept the ship throbbing throughout the nights. Drinks flowed. Glistening bodies on display and gyrating to the relentless beats heard through the superb sound system.

Another distinction between a straight cruise and this one was the fact that upon embarking the ship at the outset, there was a drug-sniffing dog checking out each passenger. Some 20 were unfortunately caught and were arrested. Not only did they have to spend a night in a Miami jail facing possession charges, they lost their investment in the cruise. Ouch!

From what I heard the Atlantis organization filed a complaint with Royal Caribbean for "profiling" gay men. We’ll have to see where that goes.

On a straight cruise, you won’t normally see a thousand or more shrieking men jumping to their feet applauding the performances of a multiple Tony award winner as they did when Patti LuPone ("Evita," "Gypsy") gave a surprise concert. There was also a concert by openly gay Andy Bell, the front man for the 80’s group Erasure.

Gay and lesbian comics were all over the cruise. Ugly Betty’s Alec Mapa was outstanding. So was Comedy Central’s Jim David. Lesbian comic Poppy Champlin was polished and funny as all hell. The venerable Miss Richfield 1981 was her usual crazy self.

The ridiculously gorgeous TV personality Scott Nevins superbly entertained with comedy, impressions and song. He even had the chutzpah to trash Streisand as part of his act—on a gay cruise no less!

Two cute newcomers—the VGL Boys (Jeff Self and Cole Escola) tried their acts out. They had been billed as 21 year-olds, so predictably the youth-obsessed passengers packed the cabaret room to see them, even though the duo had no heretofore-known track record.

And then there was the ageless Charro who amazed everyone with her talent and endurance.

There were wonderful magic acts and piano and other musical performers. But my favorite of these was Matt Yee, a muumuu-clad, frenetic, exceptionally talented piano player/singer/comic whose audience resembled a cult. The Honolulu resident was the cult leader. Yee led them in frequent toasts, ordered the audience to denounce talkers in the group with expletives, and repeated the mantra over and over: "Asian men are huge!"

Straight cruises also provide outstanding entertainment, but with gay cruises there is a clear knowledge of the audience, and they target their acts accordingly. They definitely speak to the choir. And of course, both types of cruises offer abundant and tasty food.

But the gay cruise has the bodies, the attitude, the parties and the campiness that will not be found on your bread and butter straight cruises.

All three of my cruises have been arranged by Cruise Planners.
Posted by Steve Charing at 12:21 PM

Well, Steve. This is a great description of your gay cruise experience, but the net effect is to reinforce my preference for regular cruises. To each their own I guess.

But I gotta say that this line makes this article a keeper and a hoot: "A large number of these donned Speedos sporting their own version of a stimulus package."