Marching With a Message 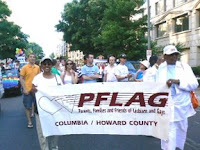 As polls indicate, the movement towards lgbt equality is making progress. Folks across America are less likely to want to discriminate against gays and lesbians than ever before.
To be sure, we had endured a setback during the bludgeoning that gays and lesbians received by Republicans during the "gay marriage" fear mongering diatribes of the 2004 presidential campaign. We were also stifled in Maryland, albeit temporarily, by the Court of Appeals ruling that failed to legalize same-sex marriage.
But with the historic passage of ENDA—the Employment Non-Discrimination Act— by the House of Representatives and the fact that more and more corporations, localities and universities are providing domestic partner benefits and other similar recognition, we may have slowly turned the corner.
Much of this progress is attributable to educating a population who is ignorant of the issues or has a prejudicial attitude against lgbt people. Their comfort zones are rife with stereotypes, or they have a personal need to look down upon others as a way to gain self-esteem and stature, or they are beholden to archaic religious beliefs that are nourished by cherry picking Scripture as a convenience.
While the prospects of changing the hearts and minds of this recalcitrant population may appear daunting on the surface, the only way to achieve success is to do the hard work and educate, if necessary, one person at a time.
Some of this is accomplished through the ever-increasing number of lgbt folks who are coming out. Family members, neighbors, friends and co-workers who know of a lgbt person are far less likely to want this person harmed politically or otherwise. The more progressive mindset of America’s youth is also a big plus.
LGBT organizations that have proliferated over the past few decades have been helpful in this regard as many have "education" components. Their websites combined with the popularity of the Internet have also been effective tools.
Another good way is for organizations to have a visible presence in the community. As an example, we in the Columbia/Howard County chapter of PFLAG (Parents, Families and Friends of Lesbians and Gays), of which I am proud to be their media coordinator, are aggressively pursuing all avenues to meet with the community and discuss our issues.
At one time, PFLAG was seen as an organization that primarily supports parents and families of gay children. Over the years it has evolved to include lgbt members as well. The lgbt’ers are bolstering the organization’s efforts in carrying out the three main components of PFLAG: Support, Education and Advocacy.
Clearly, PFLAG is not JUST for parents anymore.
These lgbt members, including the chapter’s successful Rainbow Youth Alliance, have linked with the dedicated parents to create a strong organization and one that has been adept in gaining visibility with an eye towards delivering our message. Yes, PFLAG always marches with our brothers and sisters at Gay Pride parades, and have done so for 35 years.

But it has found traction in creating additional ways to get our message out to the straight community—the large portion of the population that is critical to our success in achieving equality.
In just the past month alone, the chapter has staffed booths in a neighborhood fair, at the Howard County government’s diversity fair and the heavily attended 50+ EXPO. Then a combination of three parents and two gay men presented our stories to over 20 employees of Landmark Publications—the company that publishes the Carroll County Times and the Community Times.
At this meeting the parents discussed their journey from first learning their child was gay to the point where they are giving support to other parents and advocating for equal rights. The gay men pointed out careless words used by the media, such as "sexual preference" instead of "sexual orientation." They spoke of how the mainstream media’s use of "gay agenda," "gay lifestyle" and "sanctity of marriage" can be misleading and harmful.
Two gay men and a lesbian from the chapter presented information about the chapter’s Rainbow Youth Alliance to a couple of dozen service organizations at a Youth Development Coalition meeting in Columbia. Through networking they discovered a lack of programs that deal specifically with lgbt students in the public school system, and hopefully this dialogue can increase awareness of these needs and address them accordingly.
In an effort to reach out to the African-American community, the chapter recently held a historic and well-received forum titled "Black and Gay." At this event six African-American gay men and a lesbian shared their experiences in battling racism and homophobia to succeed in their lives and be in a position to help others.
And the work of the chapter in fighting for civil rights and providing support was affirmed recently in a public ceremony as the chapter’s chairperson, Colette Roberts, received an award from the Howard County Human Rights Commission.
With these efforts and many more to come, PFLAG-Howard County is providing a model for other grass roots organizations to reach out to their communities and alleviate the fears about gays that still percolate. The value of putting faces on these issues cannot be understated. In the process, the chapter is seeking to attract enlightened straight allies to our causes, which hopefully will reap significant political benefits.
This organization is aggressively looking for opportunities to make our case—whether it is with government officials, members of the school board, colleges and the private sector. Already, much has been accomplished in Howard County thanks to the work of the chapter’s Steering and Advocacy committees.
PFLAG will always march in the parades. But with the focus on getting our message out, we hope to have more marchers, gay and straight, line up behind our banner as we march towards full equality. For more information about the chapter, visit their website.
Posted by Steve Charing at 7:32 PM