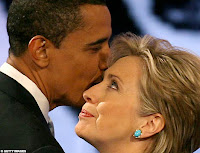 If Senator John McCain manages to overcome an electorate where 4 out of 5 believe the country is on the wrong track, who overwhelmingly reject a continuation of the war in Iraq, and his own admitted ignorance of the economy to win the presidential election in November, then Senator Barack Obama can rightfully blame, at least in part, the workings of Bill and Hillary Clinton.
When it became evident that Senator Hillary Clinton did not receive her expected coronation as the Democratic Party’s nominee and that Barack Obama ably filled the anti-Hillary void by having the audacity to challenge her, she employed her "kitchen sink" campaign in an attempt to undo him and to scare off the party’s superdelegates. In the process, Hillary Clinton stoked fears about Obama, raised dubious issues, and otherwise painted him as a political neophyte who is unsuited to be commander-in-chief, much less president.
But as the sun rapidly sets on the Clintons’ dream of a Clinton II presidency, conversations and news reports are increasingly surfacing regarding a possible inclusion of Hillary as a vice-presidential candidate on Obama’s ticket.
In a recent New York Times article, an unnamed friend of the Clintons was quoted as saying, "If she’s not going to be the nominee, then he (Bill Clinton) wants her in the second spot. In the long run, it’s the best way for her to run again in 2016." Well, so much for satisfying the hunger for change, serving the country and providing the best level of governance possible. Apparently, it’s all about Hillary’s path to the White House (again).
The problem with her being on the ticket is that Clinton does not want Obama to succeed, and he has to know that. The thought that she would stoop so low to become second banana to this novice is laughable. She damaged him with her scorched earth strategy, and her diatribes provide fresh footage for the McCain camp to air. McCain’s reputation for being "clean" would not be sullied; it is Hillary doing the hatchet job for him.
Even worse, Hillary’s stubborn continuation of a doomed and financially bankrupt campaign cut into Obama’s timeframe to soften John McCain—a necessary tactic for him to have any chance of winning. Because Obama has to spend time and money fending off Clinton while persuading the remaining reticent superdelegates, he is allowing McCain the opportunity to portray him as naïve on foreign policy among other criticisms. The Obama camp, if it weren’t distracted, may have been better positioned to begin taking the attack to McCain in earnest.
Hillary Clinton would not be helpful to the Democratic Party as some project. She is a polarizing figure with an unseemly amount of negatives and airports full of baggage. She would be the anti-change candidate on a ticket whose fundamental rationale is change. It would appear ridiculous for her to stump for a man she denounced as not ready to be president.
The GOP, who is not completely sold on McCain, would, itself, be unified and emboldened to work against Obama-Clinton. Moreover, people vote according to the top of the ticket, not for the running mate. If anything, an unpopular vice-president candidate could damage the chances of success.
Should she not be on the ticket, the Clintons would not campaign all-out for Obama to unify the party. They’d expect him to lose in the Fall and that would allow Hillary to present her "I told you so" candidacy in 2012. But if she were on the ticket, that could come sooner.
Her nefarious invoking of Robert F. Kennedy’s assassination as a rationale to remain in the race most likely doomed her chances to be selected. Without being cynically morbid, I have no doubt that part of the political calculus by the Clintons is that an intelligent, educated African-American who is so detested by "hard working," undereducated, gun-toting racists in Appalachia and other areas may not take too kindly to his occupying the White House.
This isn’t so far-fetched. A number of pundits wryly quipped that if Hillary was Obama’s running mate, he needs to find a food tester. The metaphor is eerily accurate: Hillary on the ticket would be poisonous.
The Democratic Party will come together in time. Obama cannot afford to have Hillary as a running mate and risk losing the election. And with several potential Supreme Court appointments looming and the certain continuation of "Don’t Ask, Don’t Tell," our community cannot risk having McCain win in November.

This article eventually was published in the June 20 issue of the Washington Blade.
Posted by Steve Charing at 12:33 AM

Here's an important piece of advice: If it looks like it's going to be McCain/Palin anyway (and that should be a "no brainer" for Team McCain), McCain should announce NOW or VERY SOON, rather than later towards the convention. There's currently a growing chorus for Obama/Hillary (as VP) ticket (in fact the Dems are likely aware of the Palin phenomenon). If the GOP waits while movement for Hillary as VP grows -- even worse until after it is solidified that Hillary will/could be VP pick -- selecting Palin will be portrayed by Dems/liberal media more as a reaction by GOP selecting its own female (overshawdoing Palin's own remarkable assets), rather than McCain taking the lead on this. Selecting Palin now or early (contrary to the punditocracy) will mean McCain will be seen as driving the course of this campaign overwhelmingly, and the DEMS will be seen as merely reacting. And, there's absoultely no down-side to this because even if Hillary is a no-go as VP for Obama, the GOP gains by acting early. McCain the maverick. Palin the maverick. Do it now!

There's no reason, and actually substantial negative, in McCain waiting to see what the Dems do first insofar as his picking Palin as VP, because, no matter who Obama picks, Palin is by far (and I mean far) the best pick for McCain and the GOP, especially in this time of GOP woes. The GOP can be seen as the party of real 'change' (albeit I hate that mantra, change, change, bla bla), while not really having to change from GOP core conservative values, which Palin more than represents.

In light of the current oil/energy situation, as well as the disaffected female Hillary voters situation, and growing focus on McCain's age and health, Palin is more than perfect -- now.

(Perhaps Team McCain is already on to this.)

Congratulations Ted on your astut eprediction about Palin being selected. No one saw that coming but you it seems. McCain didn't take your advice concerning the timing of the pick, but it doesn't matter. He's getting rave reviews from Buchanan-type Republicans, of course, for this "courageous" selection. But her limited experience on the National stage and her disinterest in Iraq even tho her son will be deployed there, should be enough to scare off voters that she should be in a position to be merely a heartbeat away from the presidency. Plus she is way too right to attract the independents McCain will need to overcome the Dem-Rep. gap.