Cutting it up at Neal's 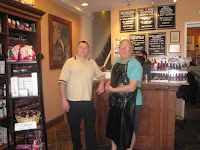 By Steve Charing
The late Hope Quackenbush, who had brought Broadway theater back to Baltimore, gave long-time actress and stage personality Elaine Stritch some good advice. When Stritch’s friend actress Colleen Dewhurst died in 1991 and she needed to have her hair styled for the funeral, Ms. Quackebush told her not to trust anybody but Neal to do her hair.
Heeding that advice, Stritch entered Neal’s Mount Vernon hair studio, and as she stepped through the door, she proclaimed, "I’m in no mood for goddamn bullshit." Proprietor Neal Foore instantly fired back, "You might as well leave. All I do is bullshit." She stayed for four hours.
And that’s Neal for you. He’s part no-nonsense business owner and part campy cut-up. Along with Joe, his life partner of 27 years, Neal (pictured L.) is the co-owner of the venerable Neal’s Hair Studio and Day Spa located at 856 Park Avenue. Because it is housed in two small buildings that are jointly connected by a courtyard, there is an entrance on Read Street as well.
A native of Baltimore and a resident of Mount Vernon, Neal began his business by renting a small space in the Sutton Place Apartments in 1984. "The focus then was on hair services," says Neal on his website. "But the goal was always to operate a full-service salon and day spa catering to the diverse needs of all people."
To realize that dream, Neal and Joe clearly needed larger space for their business. After keeping a watchful eye out for acceptable real estate opportunities, they moved to their current location in 1990. Today, Neal’s establishment has a diverse staff of 10 employees who are highly trained and creative hair stylists, estheticians, massage therapists, makeup artists, and nail technicians.
The several rooms within the building are used for their expanded services. "We do more than just hair," says Ed Armstrong (pictured R.), an experienced stylist who once ran a hair salon in Charles Village and has been with Neal’s for 13 years.
Indeed, Neal’s boasts a breathtaking menu of services and products. Besides a wide array of hair treatments, stylings and cuts, Neal’s offers comprehensive nail treatments, manicures and pedicures; a variety of facials; and several types of massages, including Swedish, Therapeutic and Stone therapy massages. They also provide body treatments and waxing services.
Neal’s gift packages sound just as enticing. "Day of Pure Indulgence," "Men’s Retreat," "Pamper to Perfection," "Stolen Moments," "Mini Day of Delight" and "A Day Dream" are some of the intriguingly titled packages.
You can be pampered for up to 6 hours with some of these specials, and the cost ranges from $100 for the "Pretty Hands and Feet" package to $280 for the "Men’s Retreat," which includes a stress relief facial and back treatment. And you know you’re in for a relaxing time when one of the quaint spa rooms is called the "Tranquility Room."
Neal’s clientele is just as eclectic as the Mount Vernon neighborhood, although many clients come from outside the area. "We cater to suburban people who don’t want suburban looks," Neal points out. When asked what exactly does he mean by that, Neal explains, "Anyone can get paint, but not everyone can paint a Rembrandt." Can’t argue with that!
Celebrities, such as Tony Randall, Leslie Uggams and Anna Russell, have been customers at Neal’s. But Neal isn’t star-struck. He actually chided iconic Grammy-award winning musician Carlos Santana over the telephone for bad manners when the star canceled a two-hour appointment without giving notice.
Over the years, Neal’s had some other interesting folks walk through the doors. Neal recalls five masculine straight men who happen to be cross dressers patronizing the salon where they were helped with their wigs, wardrobe and make-up. "They come in as lumberjacks but leave as women," says Neal. "The funny thing is, none of them know each other."
Neal’s even provided services for a transvestite wedding. Neal explained, "Just because the Government doesn’t give you a piece of paper (marriage certificate), it doesn’t mean you can’t have a wedding!"
Neal and Joe have proven over 27 years you can successfully be partnered both at home and in business. Neal’s advice for relationships: "Find someone who makes you laugh. You can always give yourself an orgasm, but you can’t tickle yourself."
Neal’s genial personality is certainly an asset for a business that deals with the public. But he and Joe also own several apartment buildings in Mount Vernon to provide a nest egg for retirement. "The business alone isn’t enough," he says.
So why did he choose the hair styling profession? Neal Foore smiles and says, "My mother was a hairdresser. So, it chose me. I didn’t choose it."
Posted by Steve Charing at 3:21 PM

I've known Neal since we were in the chorus together... When I was known as the widow Lindsey... When Carol Channing used to cancel appts at a moments notice... When Madam needed a light man at Marys... when I was a maid at the Marlin Beach... I think of you often and the fun we had during our Days in the sun...Call if you like (814) 686-0138 Donnie