Did Adam Lambert Fall to Homophobia? 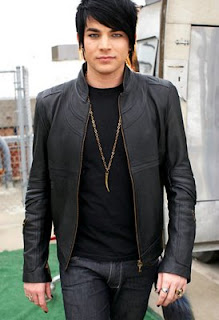 By Steve Charing
To American Idol fans, the showdown between Adam Lambert and Kris Allen presented a marked contrast in singing styles, appearance, culture, sexual identity and yes, talent. To the LGBT community and its supporters, the heavily favored Lambert offered the first real chance of a gay American Idol winner and to happen so close to the upcoming Pride celebrations.
Clay Aiken had a good chance of winning in Season 2 but curious phone line snafus from his home state of North Carolina that impeded the voting process kept him from the crown. But Aiken came out of the closet years afterwards, so it would be conjecture that had he won, he would be considered a gay American Idol.
Adam Lambert did not pronounce publicly on the show that he is gay. Rumors and photos swirled around the Internet that reinforced the speculation that had resulted from his eyeliner make-up, painted black fingernails, blue-black hair and his earrings. Add that to his ability to reach those impossible high notes and the jury came in with a verdict.
All he said on the subject was, "I know who I am. I’m an honest guy, and I’m just going to keep singing." Usually straight guys in response to such a question would be a bit more direct.
Thus, for all practical purposes, the country saw him as the gay contestant. But did that account for his upset loss that embittered so many of his fans?
In his Newsweek Pop Vox blog, Ramin Setoodeh offered several reasons for the outcome, including the gay factor. He mentioned that the judges were so much in Adam’s camp that there was a backlash among certain voters. He pointed out that "tweens" were enamoured with Kris Allen, and they are the ones with the energy and text messaging tools to vote and vote and vote.
Then there was the Christian factor. Although Adam never professed his religious beliefs, Kris and third-place finisher Danny Gokey—both who are married—were very up front about their faith and their work with the Christian church. Many Idol viewers are from rural America and small towns and cities where the Christian population is heaviest. They see the program as family-friendly, and that may explain why most of the previous winners came from the south.
Regardless of sexual orientation, Adam’s appearance and style probably did not wear well with these folks. So the theory goes that when Gokey was eliminated, his voters jumped on the Kris bandwagon. And that was fueled by Christian blogs who labeled Adam as the devil and pushed hard for Kris.
Then there was the voting and its questionable rules. The prevailing rumor is that Arkansas—Kris’ home state with a population of less that 3 million people—managed to cast 38 million out of the total 100 million votes using computerized auto redial features and heavy texting.
If this is true, I’m happy that Arkansas has such technical skills, but it clearly skews the choice for an American Idol. It is noteworthy that the producers did not reveal the final voting breakdown. Why not full disclosure unless they see it as a controversy they prefer to avoid.
Although many have used the alleged "screeching" in Adam’s performances as the reason for voting for the rather bland but likeable Kris Allen, I don’t buy it. Virtually every voice coach and singing expert I’ve read said that Adam’s ability to reach such high notes pitch perfect is amazing, and definitely not a screech. "Tracks of My Tears," "Mad World," "If I Can't Have You" were performed brilliantly and without the so-called screeching.
No doubt all of these contributed to the outcome. Adam’s perceived sexuality, however, was becoming the more talked about subject. The finals pitted the soulful, straight, conservative, married Christian youth leader versus the flamboyant, gay, Broadway-rocker type. Leading up to the finale, the question among journalists and bloggers was, Is America ready for a gay idol?
Despite many denials from Christians and other fans of the show that sexual orientation was not an issue in their preference, we still see an awful lot of the following. This is an (unedited) example by one who was listed as White Pride 71 on MSN’s American Idol Message Board:
This is American Idol! Kris should have won. He has the great american values. He is someone parents will be happy to have their kids look up to. And most important he can really sing, not just yell and scream. If adam (alice) wanted to win he (she) should have kept his boyfriend at home and in the closet! But no he wanted to shove his queer devil lifestyle into our faces. Now he has learned that America does not want that fairy boy as a idol!
Did homophobia bring Adam down? It was a combination of reasons, but clearly homophobia was among them.
Posted by Steve Charing at 12:44 PM

Over the years of *American Idol* we have seen several "winners" end up with no career in entertainment while LOSERS become industry award winners.
The show is a joke. It feeds the lowest-common-denominator of the nation's population. It hides behind technology which can not be trusted for honest results. Take a look at any part of the entertainment industry.....what is popular is NOT always what is *good talent*.