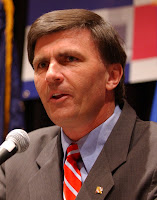 The former governor wants his old job back. What does it mean for us?

The much ballyhooed re-entry to the political arena by former Republican Governor Robert Ehrlich is now official. He will once again go head-to-head against Governor Martin O'Malley in November but this time as a challenger and not an incumbent as was the case in 2006.

Seeing what he perceives as a Republican resurgence and anti-incumbent sentiment, the former governor is staking his political career on a gamble to win back the Governor's Mansion. And a gamble it surely is.

Maryland is a state that holds a 2 to 1 advantage by Democrats over Republicans. And almost as important, O'Malley has a war chest of around $5 million while Ehrlich's is about $140,000. While Ehrlich surrogates maintain this election is about the message and the messenger, money in the till will ultimately determine the effectiveness of the message as well as the messenger.

As governor from 2003-2006, Robert Ehrlich didn't distinguish himself much. Senate President Thomas V. Mike Miller described Ehrlich as "lazy." He was known more for his battles to adopt slots as a source of state revenue, his frequent skirmishes with the Democratic-controlled legislature and the print media, and his penchant for raising taxes and calling them "fees" than any major accomplishment. Moreover, he did not address the structural problems with the budget that still plagues the current administration.

Ehrlich's defeat to O'Malley in 2006 was due in part to his record as governor but also to the anti-Bush and by extension anti-Republican tide that was sweeping the country. Nonetheless, Ehrlich's loss was unique in that he was the only sitting governor, regardless of party, to be upended in the 2006 election.

For LGBT citizens of Maryland, Ehrlich displayed much of the anti-gay record which characterized his tenure as state delegate and as a member of the U.S. Congress. Unfortunately, he always considered gay rights to be "special rights." Ehrlich's record in Congress earned him a score of only 25 out of 100 from the Human Rights Campaign. Although he ran as a moderate in a heavily Democratic state, when it came to lgbt issues, he governed from the right—the far right in fact.

Ehrlich's grossest misfire was vetoing the Medical Decision-Making Act in 2005 that prevented members of same-sex couples from visiting a sick partner in the hospital as well as other provisions designed to give unmarried couples—gay and straight—the right to make key medical decisions. He also vetoed the Transfer & Recordation Tax Exemption Bill aimed at tax relief for gay and lesbian couples.

These vetoes resulted in a strong rebuke by lgbt activists and put Ehrlich squarely in the camp of the right wing. "He is a pawn of the far right elements of the Maryland Republican Party, who have as many moderates in the General Assembly as I can count on two hands,” said then executive director of Equality Maryland Dan Furmansky at the time. “Unfortunately, he is a coward that is afraid to stand up to the anti-gay zealots who have officially taken over the Republican Party in this state.” Ehrlich did go along with a revised measure the following year—an election year.

Moreover, Ehrlich was a staunch opponent of same-sex marriage and vowed that such a policy would not happen on his watch. This was mind-boggling considering he had employed two openly gay men as his chiefs of staff.

Ehrlich's record during his public service career will not provide a reason for lgbt Marylanders to celebrate should he overcome the odds and be elected in November. For his part, however, Governor O'Malley hasn't exactly enthralled us either during his term.

Although O'Malley was supportive of most LGBT issues as Mayor of Baltimore and as a member of the City Council, he has been rather tepid on lgbt issues during his term as governor. He has not come out for marriage equality but would sign such a bill if presented to him, and he opposes a constitutional amendment to ban it. O'Malley favors civil unions, and he has extended domestic partnership benefits to state employees. But O'Malley certainly has not been a leader on these issues.

It has been disappointing that with a Democratic governor and a legislature that has huge Democratic majorities, key legislation on marriage equality and transgender protections have not been passed during these past four years. There are several factors in play; it seems that it will have to wait at least another year. But that is only if Ehrlich fails in his bid; it would take longer otherwise.

Handicapping the election seven months away is a daunting challenge. The anti-incumbency sentiment could fade as the economy picks up, and that would take any steam out of the Ehrlich express. And few voters wax nostalgic for the Ehrlich years as they were marked by strife and a lack of remedies to the overall budget morass.

But O'Malley who only won by about seven percent in 2006 is not especially popular. The economy could continue to falter, which fairly or unfairly could be problematic for the governor. And linking Ehrlich to Bush won't be as effective this time around.

LGBT citizens who have staunchly supported O'Malley in the past may not have the same degree of enthusiasm this cycle, which could affect contributions as well as votes. And not all gay folks vote according to lgbt issues. But I'm betting that for those folks where lgbt issues matter, O'Malley will still garner the vast majority considering the alternative.

Posted by Steve Charing at 1:00 AM