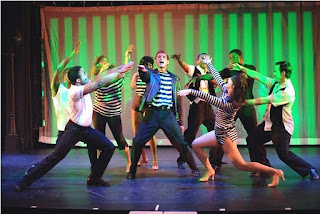 The production of Smokey Joe’s Café at Toby’s Baltimore is not your typical musical. There is no story line to keep track of that binds the musical performances. There is no acting. There is no dialogue. And so unconventional is this musical that the performers don’t have character names. Rather than adhering to a chronological structure or any kind of plot (and some might find fault with that), Smokey Joe’s Café is a musical revue.

What is presented on Toby’s stage is a lightning bolt of energy that brought back to life over three dozen pop, rock and blues standards—some huge hits, some lesser known— mainly from the 1950’s by the prolific composing tandem of Jerry Leiber and Mike Stoller. In producing their own songs, the duo took control of their material, as did the Beatles, for example. “We don't write songs,” Leiber famously said. “We write records.”

The album, Smokey Joe's Cafe: The Songs of Leiber and Stoller, won a Grammy in 1996 for Best Musical Show album. The show’s earlier performers garnered several Tony nominations. It had opened on Broadway in 1995 and closed nearly five years later after 2,036 performances. In 1996 the touring company paid a visit to the Morris A. Mechanic Theatre in Baltimore.

It is a sparkling display of fast-paced, high-tempo performances from the talented young ensemble. There are ten performers in this group, which is an increase over earlier iterations of the show. The nearly forty songs were performed with varying combinations of the cast. Overall, the ensemble offered scintillating, lively performances and was true to the Lieber and Stoller score.

They belted out such favorites as “Kansas City,” “Poison Ivy,” “Jailhouse Rock,” “Love Potion #9,” “Hound Dog,” and a host of others that will make you clap your hands and tap your feet. They crooned to such popular and melodic ballads as “Stand By Me,” “Don’t Be Cruel,” “There Goes My Baby,” “I (Who Have Nothing)” and “Spanish Harlem.”

Under the direction of Kevin McAllister and musical director Cedric Lyles, the strengths of the cast members were well utilized to maximize the performances. Each one had something to offer and their talents were well integrated to create a beautiful tapestry of song and dance.

From the soothing bass voice of Marquise White to the powerful soprano Kelli Blackwell, the numbers they performed were superb as exhibited in their duet in “You’re The Boss.” The other cast members’ vocals were also joyful.

If a performance required some comical body language, then the directors turned to Bryan Daniels, who was a crowd pleaser. His rendition of “Treat Me Nice” treated the audience nicely.

And if choreographers Ashleigh King and Anwar Thomas sought an energetic, versatile dancer to lead in several numbers, then they struck gold with Toby’s veteran Derek Tatum (“Hairspray,” “Chicago,” High School Musical”). His shirtless performance in the song “Don Juan” elicited some shrieks from some audience members who admired his taut physique. Tatum’s Elvis-like dance routine in “Jailhouse Rock” also stood out. In general, the choreography from the cast was as harmonious as the tunes.

The pace of the show was breathtaking. Nearly 40 songs were performed in just over two hours. No pauses, no gaps, no respite in between selections. The performers for the next number were onstage virtually as the previous song ended. As such, the changes to Janine Sunday’s appealing period costumes were executed rapidly and smoothly—a credit to the stage production staff and the performers.

The set was spartan, which did not add or subtract from the quality of the production. Nor did it create a mood harkening back to the 50’s. A blank screen hung behind the performers and reflected some images from time to time but served mainly as a partition between the ensemble and the excellent orchestra. However, nicely designed stairways were used on both sides of the stage in a number of selections. It was clear that the performances were central to the show’s value, not the scenery.

While the musical revue overall doesn’t tell a story, most of these Leiber and Stoller songs do individually. If you’re old enough to remember these tunes, you will truly appreciate this production and bring back those memories. But if not, you should simply relax and enjoy the remarkably talented cast and musicians and tap your feet, which is hard not to do.