An End of an Era: The Hippo is Set to Close

After 43 years, the Club Hippo, one of Baltimore’s oldest and most iconic LGBT institutions, is poised to close its doors. 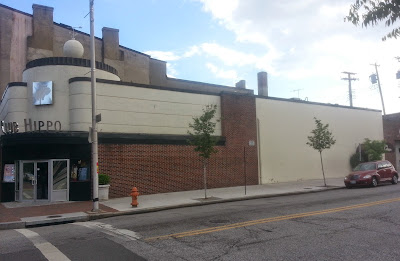 As confirmed at a meeting with employees on May 9, Hippo owner Chuck Bowers has negotiated to convert the building at the southwest corner of Charles and Eager streets into a CVS store.
The negotiations between CVS and Bowers began early in 2014.  Under the arrangement Bowers will retain ownership of the building and lease it to CVS.  There is no date certain for the anticipated last dance, but it will likely take place sometime after the summer at the earliest.


Upon completion of the deal with CVS, it would mean an end of an era for an establishment seen by many as the epicenter of Mount Vernon’s “gayborhood.”  Recently, that area has also been jolted by the expected closing of Jays on Read, a piano bar that had a loyal LGBT following and Comprehensive Car Care, a long-time staple on Eager Street.
The Hippo, which opened on July 7, 1972, possesses one of the largest dance floors of any club in the state.  During disco’s heyday, the Hippo flourished with huge crowds dancing to the beats of vintage and newer disco hits on its spacious rectangular floor bathed in glimmering, colorful lights.  As musical tastes changed in succeeding years, so did the music.  The Hippo kept up.


The club also features a popular video bar where karaoke and weekly show tunes video presentations occur and a saloon area that had been renovated several years ago.  Those renovations dispensed with the two pool tables near the bar’s large glass windows and added more seating at tables within the saloon.
Through the years, the Hippo, whose motto is “Where everyone is welcome,” hosted such extravaganzas as the Miss Gay Maryland pageants and Mr. Maryland Leather contests as well as Twelve Days of Christmas, an annual affair that benefits local non-profit organizations. The Hippo had also served as the venue for Gay Bingo—a weekly event whereby non-profit organizations shared in the proceeds.  To broaden its appeal, the Hippo has held well-attended weekly Hip-Hop nights the past 11 years.


There have been numerous specialty events held at the Hippo with well-known DJs and drag performers entertaining the masses.  Many of these individuals began their drag careers at the Hippo.
The club’s Halloween celebrations are legendary showcasing the community’s vast cache of creativity, and the Hippo’s annual New Year’s Eve gala has always been a popular stop to herald in the New Year that frequently attracted local celebrities—LGBT and straight—to the club.
Though the Hippo does not have a large political footprint, it had been the host venue for fundraising events throughout the referendum battle in 2012 in an effort to secure marriage equality. Baltimore Mayor Stephanie Rawlings-Blake, who had appeared at some of those events, customarily spends her birthday at the Hippo for one of their charitable Bingo nights.


For his part, Bowers, who recently turned 70, has donated sizable amounts of money to LGBT non-profits, primarily to Baltimore Pride and its sponsor, the Gay, Lesbian, Bisexual and Transgender Community Center of Baltimore and Central Maryland (GLCCB). The Hippo has been one of the focal points for the annual Pride block parties along Eager Street.
In addition, he has allowed other organizations to hold fundraising events at the club.  Early in the 1980’s when the AIDS crisis began, Bowers was one of the first to help raise money to fight the disease.


"Gutting it for a CVS just doesn't seem fitting.”


Other than special events, there has been a decline in gay bar patronage over the past few years for a variety of reasons, and the Hippo was impacted by that trend as well.  Nonetheless, many folks in and out of Baltimore’s LGBT communities view the Hippo as more than just a bar with so many stating that the Hippo was the first gay bar they patronized.  It had also been a strong visitors’ destination whereby out-of-towners discovered Baltimore as a gay-friendly city.


To others, it meant much more. “The Hippo is an anchor of LGBT openness in Baltimore,” Tree Turtle, a Baltimore resident, told me  “It routinely brings together a broad cross-section of Baltimore of all colors and creeds. Regardless of the progress of LGBT human rights, regardless of the mainstreaming of queer people, and no matter how tough the economic climate is, we still need community havens! We still need people to love us for our difference. Yes: we are both same and different!”
She adds, “Where would we be but for the openness and distinctiveness of the leather daddies, the drag queens, and the drag kings? That's why we need to be accepted for our work as well as our play. That's why we need the Hippo, the Baltimore Eagle, the GLCCB, and all LGBT refuges in Baltimore!”


A person identified as 1/619K commented on Baltimore Brew, an online daily news journal, “With The Hippo’s presence on Baltimore’s major artery, straight Baltimore has had a slice of gay life mainstreamed into their everyday experience for 40 years. Early on, that really mattered. Chuck Bowers’ vision and tenacity created something groundbreaking and important. Gutting it for a CVS just doesn't seem fitting.”
As for Chuck Bowers, there is much nostalgia.  “When I come into the bar on a daily basis it’s quiet, no one is here yet. I walk through the building and look around. I hear the music, I see the lights, I hear the glasses clinking…..and then I stop,” he said in a statement.


“And then I see the people whom I have met over the years.  This is to me, the most valuable asset this club provided me.  Their laughter, their smiles and more importantly their friendship over these years.   I want each and every one of you to know how much you have meant to me and for your ongoing support and friendship that has encouraged me to keep the club open for you.”
Posted by Steve Charing at 11:17 AM

Steve, you could have not written this article any better. I have been going to the Hippo since 1976 and have many great memories. I have known Chuck Bowers for about 38 years. Chuck and I became competitors when I opened the Allegro in 1986 and then when I opened Central Station 1991 now Grand Central. Chuck had always signed a letter of support for the liquor board in support of me. Chuck has had the most loyal staff and customers so many who have been there since the beginning. I know Chuck better then most people. Of course his staff sure would know him the best beings they have had an everyday relationship. Chuck has always operated a first class business and his heart has always been there for everyone. Chuck has done so much for the community by given back. He has done so many charities and has helped so many. There are so many good things that Chuck has done and that most people are not aware of. Chuck has spent most of his life there, it was his life, and his staff and friends and customers were his family. The Hippo has to be the cleanest club in Baltimore. It's one of the largest and best gay dance clubs on the Northeast section of the Country. It's the oldest danceclub in America. The Hippo was chosen a one of the best 10 Best Bars in America. The demographics have changed so much over the years. Their was about 20 gay bars in Baltimore 30 years ago. I can remember when the Hippo and the Allegro would have a line to get in 6 days a week. Gee how things have changed. People are now on different meeting sites. The DUI laws have changed, Gays now now feeling excepted and hanging out with their straight friends and now hanging out in the straight clubs and restaurants. The Government City and State have made it so hard with the constant increase of tax. We have to hold back so many times with raising our drink prices with all the expenses that keep going up only because so many people do not have the disposal income. With life we all have the goal of some day of retiring. Chuck at 70 years old sure has hung in there longer then most people. Chuck had to make an extremely difficult decision with the selling his business. He is hurting just as much for the staff and the community that has been there for years. Chuck and I have had our differences through the years. But at the end of the day we have always been there with support of each other, whether it was standing on the corner having conversation or many time having lunch or dinner. I congratulate Chuck for the person and heart he has. And can only wish him the best with his retirement. He sure has earned it...Don Davis

So sad to hear about The Hippo.As part of the group Saratoga I have many wonderful memories of Baltimore.and all of our adventures at the club.