Pride is Bustin' Out All Over

Pride used to be solely a June thing.  When the Stonewall uprising of 1969 was commemorated beginning in June 1970 gay and lesbian folks started to speak out forcefully against mistreatment and discrimination and at the same time pushing to achieve the same rights held by others.  Steadily that theme faded away as the years rolled along, not because all the rights for LGBT individuals have been achieved, but Pride evolved into more of a spectacle that took on a less political character. 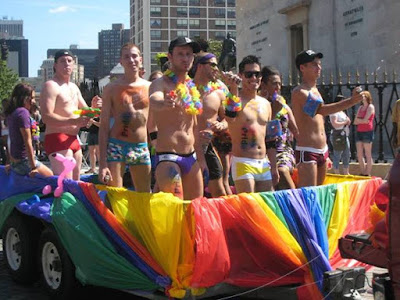 Pride became a huge enterprise that brings in needed dollars to organizations running the events   that usually feature a parade and a festival at a minimum but also for corporate sponsors who display their support for LGBT rights.  This involvement benefits those gay-friendly businesses as LGBT folks will remember seeing their logos on promotional materials.
There’s nothing wrong with this at all; it’s the way our economy works.  Sponsors support a celebration that LGBT people crave and they get the benefit of advertising.


Whereas most Pride festivities took place in the month of June, they are now spread over a season, if you will.  Locally, that’s certainly the case.  Hagerstown Hopes Pride occurred in May.  June will see a number of Pride happenings including Capital Pride in DC and Frederick Pride as well as the big one in NYC.
Because of a scheduling conflict this year, Baltimore had moved its annual event to July for the first time—the 25th and 26th to be exact.   The Pride Festival of Central PA in Harrisburg will also take place on July 25.  And the Chesapeake Pride Festival in Mayo Beach Park in Anne Arundel County normally occurs in August but this year it was cancelled because of financial shortcomings.  Organizers say it will return in 2016 if the needed funds can be raised.


Thus, our Pride season touches four months giving LGBT  folks and allies opportunities to check some neighboring festivals over this period and not have to feel that it’s one and done.
This is going to be an interesting Pride season for sure.  Heck, they all are but 2015 could be historic.  The U.S. Supreme Court is expected to rule by the end of the month whether or not same-sex marriage will become the law of the land.  Everywhere throughout our interconnected world will find out soon enough if this potentially enormous victory will be realized.


It is what marriage equality advocates have been hoping for over a decade.  Our relationships could lead to a societal equivalency when gays and lesbians tie the knot.  No longer would we be considered second class citizens in the U.S. should the Justices rule that the states do not have a Constitutional right to ban same-sex marriages.
And it’s not just here. With Ireland’s unprecedented vote by its people last month, a whopping 19 countries now permit same-sex marriage, and the U.S. is poised to be number 20 with a few more on the immediate horizon.  Go back as recently to the 2004 presidential campaign where Karl Rove and George W. Bush led the charge against same-sex marriage.  Fast-forward to the present and soak in what changes have taken place in these 11 years.  It’s utterly amazing.


Think of the celebratory atmosphere at Pride events amped up by such an historical decision should it come to pass.  True, most Pride attendees ignore politics even if they are directly affected; they prefer to party and carouse.  When was the last time you heard political speeches from the Pride stages in Baltimore?
Those who remember or at least pay homage to the true reasons for celebrating Pride are resigned to the fact that the torch has been passed on to a new generation.  Many in this new generation are oblivious to the sacrifices others have made in the past and the numerous hills that were climbed with still many left to conquer.  Nonetheless, if the rainbow stars are aligned, this should be some helluva Pride.


A good number of LGBT people believe that the establishment of full marriage equality is another step towards mainstreaming—a fear or acknowledgement ignited by the closing of gay bars over the past two to three years.  Most of these closings were business decisions in one form or another; not a surrender to some inevitable social ailment that will eventually make gay bars extinct.  It’s not going to happen—not if there’s money to be made.
While these folks fear this loss of identity, keep in mind that homophobia is alive and well.  Despite any court rulings, we are not fully accepted, not by a long shot.  For example, the nation does not have a federal anti-discrimination law in place and will not do so for years to come under the current composition of Congress.


The hateful antigay rhetoric you read on the Internet is chilling.  The Republican presidential hopefuls so far have yet to ease up on their homophobic rants as they foolishly try to appeal to their extremist bigoted base and then wonder why they can’t win a general election.
And not all homophobia is overt.  Little comments here and there from those who deny they are homophobic are, in fact, homophobic even if accompanied by their phony smiles.  People you think are accepting put on a façade but their inner selves think otherwise.


As we celebrate Pride for whatever reasons, just know we are not there yet.  We still have an important identity that is not going to evaporate because of gay bars shutting down. Plus, there is much work left to do; marriage equality doesn’t end our quest, it provides the momentum to march on.
There are ample opportunities and incentives to celebrate this Pride season.  But we have to keep it real.