Lawsuit takes aim at protections passed by school board

Kaden is a 27 year-old transgender man (FTM) who works in Frederick, Md.  As part of the transgender student-led “Support FCPS [Frederick County Public Schools] Trans Students” Facebook page , Kaden posted that trans people from all over the U.S. face difficult challenges, such as “violence towards the community, employment discrimination, bullying” among others.

He feels that these issues “stem from the mindset that trans people are the ‘other’ and maybe we don’t need to respect them or we can view them as inferior because they are different.”

Visibility, advocacy and education, says Kaden, are the keys for Frederick residents to support their transgender neighbors.  This is especially important for transgender students.

To help foster this visibility as well as educate the public and build support, the “Support FCPS Trans Students” Facebook page has served as a platform to launch a campaign last spring called #IAmFrederick. The effort is aimed at bringing together trans students, family members, and allies to work towards better safe schools for transgender students.

Kaden is among a diverse group of people—trans students, allies, family members, educators and counselors—who have participated in this campaign on both Facebook and Instagram whereby supporters are photographed holding up a certificate labeled #IAmFrederick and underneath write why they support trans youth.

This alliance successfully lobbied the Frederick Board of Education for Policy 443, a policy which would protect trans and gender non-conforming students by affirming their student rights.  More specifically, the policy allows students to choose the restroom based on their gender identity as well as participate in sports that are consistent with their gender identity. It would also allow students the opportunity to room with others according to their gender identity. The Board saw to it that privacy rights for all students are protected.

With overwhelming community support, Policy 443 was approved in June.

“This policy, one of the most affirming of any county school system in the state, protects students from bullying, supports student privacy, and ensures that Frederick schools are safe and welcoming for all students,” said Mark Procopio, Executive Director of FreeState Justice, a legal advocacy organization that seeks to improve the lives of low-income LGBT Marylanders.  “It is a great victory for the student leaders who led the effort.”

As I reported in the Washington Blade in August, a federal lawsuit in response to this action was filed in the District Court of Maryland by a 15-year-old girl under the pseudonym Mary Smith, and her mother, identified as Jane Doe against the Frederick County Board of Education and Superintendent Theresa Alban.

The lawsuit argues that the policy approved by the Frederick County Board of Education violates the girl’s fundamental right to bodily privacy, and her mother’s fundamental parental rights regarding the care and upbringing of her child.

The content of the complaint is filled with vitriolic hype that lacks a basic understanding of what it means to be transgender.

For example, the suit’s language compares the School Board to a totalitarian regime and likens the School Board’s adopted policy to “child pornography” and “Nazi death camps.”  It also specifically maligns the sexual orientation of a School Board member.

It must be pointed out that the attorney representing the plaintiff, Daniel L. Cox, Esq. of the Emmitsburg, Md.-based Cox Law Center admits to be affiliated with the ADF—The Alliance Defending Freedom .  That fact is stated on the firm’s website. (See image below.) 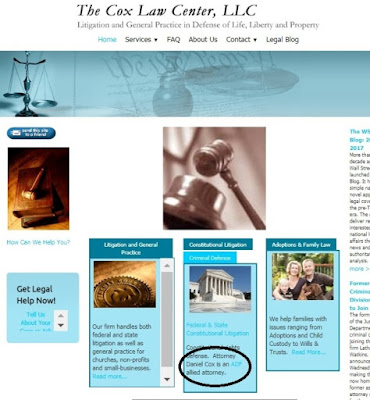 According to the Southern Poverty Law Center, an organization that is dedicated to fighting hate and bigotry and to seeking justice for the most vulnerable members of our society, the Alliance Defending Freedom has been identified as a national anti-LGBT hate group.
SPLC states that the Alliance Defending Freedom “supported the recriminalization of homosexuality in the U.S. and criminalization abroad; has defended state-sanctioned sterilization of trans people abroad; has linked homosexuality to pedophilia and claims that a ‘homosexual agenda’ will destroy Christianity and society.”

Undaunted, allies and advocates are determined to see that the policy is upheld.

“Every child in Frederick County Schools deserves a welcoming and safe environment to learn,” says FreeState Justice’s Mark Procopio.  “Policy 443 ensures that transgender students are protected from bullying and harassment and guards the privacy of all students.  It should be defended vigorously against this frivolous suit.”

The Board of Directors of The Frederick Center, a non-profit organization that serves the LGBTQ community in Central Maryland, weighed in as well with the following statement:

“[Members of] The Frederick Center Board of Directors were dismayed to learn of the lawsuit filed [in August] by Jane Doe in an attempt to block the implementation of FCPS Policy 443. Policies like 443 greatly benefit our Transgender community through its affirmation of their identity. The claims in the filing against the Board of Education appear to be baseless and desperate attempt to continue allowing discrimination in our schools and against our children.”

The plaintiff is demanding a jury trial.


From FreeState Justice, Maryland's leading LGBT advocacy group:
Today, a Frederick County transgender student filed a motion to defend his school board’s policies that seek to prevent discrimination, harassment, and stigmatization of transgender and gender nonconforming students in the school system, and that seek to ensure students are free to use school facilities in accordance with their gender identity. He is represented by FreeState Justice, the ACLU, and the ACLU of Maryland.
The student filed a motion to intervene in a lawsuit currently pending in the United States District Court for the District of Maryland, in which a non-transgender student seeks to overturn the Frederick County School Board’s policy protections for transgender students.
The school board’s policies, adopted in June 2017, were welcomed by community members from all over Frederick County. James van Kuilenburg, an honor student at Governor Thomas Johnson High School and the transgender student who moved to intervene today, explained that the policies “gave me the ability to finally be myself and access all parts of my education.”
The lawsuit against the Frederick County School Board was filed anonymously by a non-transgender student and her mother who claim that allowing transgender students restroom and locker room access infringes upon student privacy rights. However, the only privacy violation alleged in the plaintiff’s complaint is by a non-transgender student. The lawsuit also seeks to invalidate policies preventing harassment, and protecting the confidentiality and privacy of transgender students.
In the wake of the lawsuit, the Frederick County group “Support FCPS Trans Students” has started a social media campaign #IAmFrederick to show support for their transgender classmates.
According to van Kuilenberg, reversal of the policies would be “devastating.” “There is an epidemic of trans students feeling unsafe, depressed, and suicidal,” he explained, and a removal of the policies in place to protect them would “create a culture of fear and misunderstanding.”
“It’s important that trans students are given the opportunity to defend themselves against these shameful attempts to isolate and stigmatize them,” said Gabriel Arkles, senior staff attorney at the ACLU LGBT & HIV Project. He added, “Schools can and should provide extra privacy protections or private restroom or changing areas for any student who requests it. But no student has a right to demand that transgender students be segregated from their peers.”
“The Frederick County School Board did the right thing: they created policies that affirm and respect their students’ gender identity.” said Jennifer Kent, Managing Attorney of FreeState Justice, “We intend to vigorously defend these policies in the interests of our client and affected students in Frederick County Public Schools.”
Said ACLU of Maryland Senior Staff Attorney David Rocah, “Everyone seeking an education, including those who are transgender like James, should be treated fairly and equally under the law. Frederick is joined by hundreds of school districts around the country that allow transgender students to use school facilities based on their gender identity. These policies include transgender students as equal members of the school community while still protecting the privacy of all students.”


Counsel on the motion to intervene also include Leslie Cooper and Gabriel Arkles of the ACLU, David Rocah, and Nick Steiner of the ACLU of Maryland and John Hayes, Brian Whittaker, and Kenneth Nichols of the law firm Nixon Peabody, LLP.
Posted by Steve Charing at 9:39 PM