Whatever Happened to the Trump Resistance? 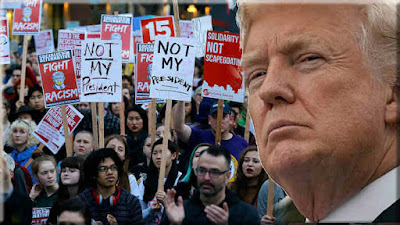 I recently saw the most excellent film Star Wars: The Last Jedi in which I heard the term Resistance mentioned at least a couple of dozen times in reference to the Resistance against the New Order’s Supreme Leader Snoke.

Back to reality, back to 2017 in the galaxy of our own country, we are witnessing the conclusion of the first year of our own version of the Supreme Leader’s term—a period for a consistent solid majority of Americans whose emotions had fluctuated somewhere between disheartening to disdain.  During Star Wars: The Last Jedi I mused what happened to the Resistance against President Donald Trump that had debuted with the incredible Women’s March a mere day after the inauguration.

This majority of Americans see Trump’s election as illegitimate.  All U.S. intelligence services concluded that Russia hacked into the Democratic National Committee’s emails and found a way to strategically release the contents with the sole goal of helping Trump win the election while disparaging candidate Hillary Clinton.  That Russia, a foreign adversary, sought to meddle in our election process and most likely succeeded in installing the candidate of that government’s preference, has been accepted as fact by everyone but curiously Trump and his hard core supporters.

Whether the Trump campaign aided that effort is an open question and is the subject of investigations by House and Senate committees as well as the probe headed by Special Counsel Robert S, Mueller III.

Despite Trump’s denials, most Americans saw this election as tainted, and cries of “Resistance” were echoed throughout social media.  Following the Women’s March whereby stunningly several millions of people participated in Washington, D.C. and in any one of over 600 satellite demonstrations around the country to protest Trump’s presidency, there was unexpected momentum to the Resistance.

There were sporadic demonstrations following the ban on travel from several predominantly Muslim nations, the pullout from the Paris Climate agreement, the rescinding of protections for the children of undocumented immigrants among other actions.

Then the protests seemed to quiet down though resistance manifested itself in several special elections where opposition to Trump was apparent in the level of turnout and enthusiasm highlighted by the upset win by Doug Jones in Alabama.  The opposition to Trump at the ballot box by dint of energy and enthusiasm is a strong indicator that Democrats will experience a successful mid-term election in November 2018.

Clearly, the street demonstrations, which harness the energy of the opposition, seemed to wane a bit.  This has been surprising given the unpopularity of the president and the dispiriting actions he has taken in his first term.  I thought there would be protests nearly every weekend to, if nothing else, prove to the narcissistic president that he is not adored and worshipped as he would love everyone to believe.

However, according to a report in the Washington Post things may change if Trump derails the Mueller investigation.

Opponents of the president have been hoping upon hope that the findings from the probe will ultimately lead to the impeachment of the president. While collusion with the Russians may be a more daunting task to prove, obstruction of justice—the crime that eventually brought down President Richard M. Nixon—appears more cut and dry to the resistors.  They are banking on the Mueller investigation as means to truncate Trump’s term and rid the nation of the stain he has imposed on the country and around the globe.

The Post states that tens of thousands of protesters will be storming the streets within hours should the president fire Mueller.

More than two dozen progressive organizations, say the Post,  have spent the past several weeks lining up what they vow would be an immediate response that would be hard to ignore.

“Using an online portal that links the various groups and their contact lists, more than 140,000 people have registered to begin protesting within hours of Trump's decision, at predetermined locations in more than 600 cities.

The protests are designed to harness what organizers predict would be a wave of nationwide outrage that would follow Trump's action, which Democrats in Congress warn could trigger a constitutional crisis.”

The Los Angeles Times reported  that if Trump fires Mueller before 2 p.m., the demonstrations would begin at 5 p.m. that day. They would begin at noon the following day if Trump were to act after 2 p.m. Organizers in New York already have stockpiled bullhorns in apartments near Times Square, the would-be location of the New York City demonstration.

It is unclear if President Trump will take the political risk of stifling the investigation. Right wing media including Trump-TV (Fox News) have been cajoling him to do so citing flimsy evidence of partisanship among the Mueller team.

Regardless, activists are taking no chances and preparing to unleash the fury should Trump interfere.  It is questionable if Republican members of Congress who insisted early on that the “red line” of stopping the investigation cannot be crossed, will put country over party.  I’m taking bets.

We will wait and see what transpires.  As in the case of  the Resistance to the New Order in Star Wars: The Last Jedi, the action here in the U.S. could make for an interesting sequel.
Posted by Steve Charing at 6:00 PM

I for one am concerned if POTUS fires Mueller and ready to hit the street with a sign. In the meantime I have to sit my behind down and write a Republican or two just to remind them that they were elected to represent the PEOPLE and not to just follow a President who happens to be of the same party and happens to be a Narcissist.