Kings of the Road

The Washington Nationals defied the odds, questionable calls, and history to notch their first world championship. 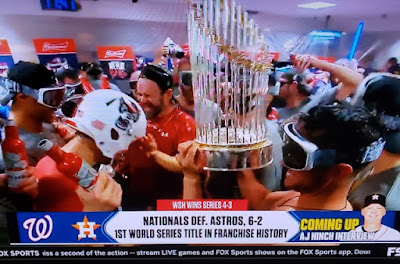 In an astounding World Series, the Washington Nationals prevailed 4 games to 3 by defeating the heavily favored Houston Astros 6-2.  As such, this team managed to win the World Series without any victories on their home field. In fact, the Astros didn’t either, and since 4 games were played at Minute Maid Park, that is why the Astros fell short.

Actually, no team in the history of playoffs in Major League Baseball, the National Basketball Association or the National Hockey League experienced a 7-game series where the visiting team won all the games. This was the first time, and celebrations in local bars were scant.

In the words of Vin Scully who famously called Kirk Gibson’s epic walk-off home run in 1988, “In the year of the improbable, the impossible just happened.” It should apply to this situation.

As I  previewed Game 5 of the National League Champion Series between the Nationals and the Los Angeles Dodgers, the Nats appeared to be a “team of destiny” having survived the Wild Card game against the Milwaukee Brewers in come-from-behind fashion to move on.

The Nats, the oldest in baseball, were getting some breaks along their journey until the bats cooled off and were outscored 19-3 to Houston in the 3 games at rocking Nationals Park. Game 5 may be more remembered for the thunderous booing of President Trump in attendance than anything else.  A disappointing performance by the team  to be sure, but the fans still believed they had a chance, albeit not a great one, against the 107-win Astros.

But they did because, yes, they were returning to the road again. The Nats prevailed in Game 6 behind the magnificent Stephen Strasburg despite an absolute horrendous call by umpire Sam Holbrook on a play wherebyTrea Turner was called for interference while legging out what should have been an infield hit.

In Game 7 they again came from behind after being shutout for 6 innings on one hit and eventually won 6-2 to seal the deal.

The Nationals were 5-0 in elimination games during this post-season and were behind in all of them. It was an amazing run, and succeeding as they did on the road, winning the last 8 games as visitors, will be a subject of conversation in the coming weeks and months.

A year and a half removed from the Washington Capitals spectacular quest for the Stanley Cup (also with dominance on the road), the Nats' success in the World Series has given the area yet another lift and a well-deserved one at that.

Posted by Steve Charing at 1:42 AM