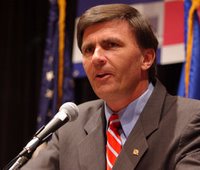 By Steve Charing
Senior Political Analyst
His TV commercials say that Governor Robert L. Ehrlich, Jr. doesn’t govern from the left or the right, but from the center. But that’s not entirely true: Ehrlich actually governs from the left, the right AND the center.

As a candidate in 2002 when President Bush’s approval rating was at a gaudy 85 percent, the right-leaning former Congressman ran for governor of Maryland as a Bush-type "compassionate conservative" and became the first member of the GOP to hold such an office in Maryland in a generation.

He entered the race as an underdog and came from behind to knock off a weak candidate, Lt. Governor Kathleen Kennedy Townsend, who had the shadow of the political pariah Parris Glendenning, as well as a severe state budget deficit, cast upon her. In doing so, he attracted many moderate and conservative Democrats—a must in a state that has registered Democrats outnumbering Republicans two to one.

Through his three and a half years in office, Governor Ehrlich returned to his pro-business, right wing roots and was virtually all over the map on social issues. For example, he is pro-choice but also pro-death penalty. He publicly was an advocate of an amendment that would enshrine discrimination into the state’s constitution on the matter of same-sex marriage. Yet he signed, albeit reluctantly, a measure that allows for stem-cell research.

He vetoed a sensible and sought-after Medical Decision-Making Act during the 2005 General Assembly that would have conferred key healthcare rights to unmarried couples and families, particularly lgbt couples where marriage was not an option. He also vetoed the Transfer & Recordation Tax Exemption Bill, which would have allowed same-sex couples to transfer real estate to each other without paying recordation and transfer taxes—a privilege granted to married couples.

During the 2006 legislative session, he marched to the beat of the right-wing conservatives who insisted on a constitutional amendment barring same-sex marriage. He strongly and vocally supported the measure. That initiative failed, but the Governor has not backed off from his position.

But recently, the Governor dismissed an appointee to the Metro Transportation Board, Robert J. Smith, for characterizing gays as deviants on a talk show. And a week later he appointed an openly gay judge, Christopher Panos, to the Baltimore District Court.
These actions that seemingly go counter to Ehrlich’s earlier positions provide a glimpse into his re-election strategy. He is trying to appear moderate while still holding his conservative values.

He has no choice.

Maryland is a Democratic state. Bush’s poll numbers have sunk to the mid-thirties from the mid-eighties, and the Governor is an unabashed supporter of the President. That is not good news for a Republican with a sketchy record of accomplishment trying to renew his lease in the Governor’s mansion.

To retain those Democrats who supported him last time around, Ehrlich has no option but to move towards the middle. Even if the dismissal of Smith and the appointment of Judge Panos irked the Don Dwyer's of the world, Ehrlich knows all-too-well that they will still vote for him in November. Those right wing bozos, who still believe Iraq attacked the World Trade Center, will reliably be there for the GOP, if not enthusiastically.

His surprising choice of Kristen Cox, a legally blind woman to be his running mate, was an attempt to further burnish his moderate credentials. This selection is aimed at appealing to women, minorities and those with disabilities.

With Doug Duncan dropping from the race, Mayor Martin O’Malley emerged as the sole opponent to Ehrlich. O’Malley angered many gay activists during the debate in the General Assembly when the constitutional amendment was the issue of the day. He issued a statement in January following Judge Murdock ruling that it is unconstitutional to ban gay couples from marrying.

"I was raised to believe that marriage is between a man and a woman," the statement read. "This is a fundamental issue of the state’s public policy, and a decision that ultimately should not be made by a single trial court judge. The Court of Appeals should review this matter, and any legislative action would be premature until the court acts."

However, during the course of compiling questionnaires from the candidates on lgbt issues in advance of candidate endorsements, a source in Equality Maryland told OUTloud that O’Malley is totally opposed to an amendment and that "the lgbt community would be happy with his positions on other lgbt issues."

With Ehrlich’s campaign marching down the center lane, should the lgbt community believe that he has seen the light and will now be in our corner? Not likely. His recent gestures, while welcome, were part of a political calculation designed to present himself to be a moderate. Should he be re-elected, he will undoubtedly return to the right lane—perhaps more so—during his final term.
Posted by Steve Charing at 12:14 PM

Great article Steve. I think it is very important as the "Gov" makes a few token moves to the GLBT community pre-election that we be reminded on his full record, especially his vetoes of the Medical Decision Making Act and the Transfer and Recordation Tax Relief. (A Republican acting to retain a tax???) Similarly we must remember that while O'Malley may not voiced the kind of public stance we'd like, he is being mindful of the politics of the situation.

I think this article makes it very clear for any fence-sitters who care about equality and fairness for the GLBT community, that O'Malley is your man in November.