This "F-Word" Thing Could Help Us 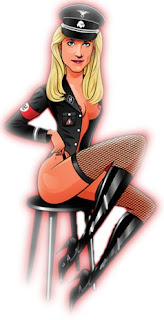 The vile Ann Coulter, a flame-throwing, hate-filled ultra-conservative author, columnist and commentator has joined the growing parade of highly publicized verbal anti-gay bashers. And I welcome her.
The recent spate of "Mel Gibson" moments began with reports that actor Isaiah Washington called fellow Greys’ Anatomy co-star T. R. Knight a "faggot" during an altercation on the set. Then when former National Basketball Association player John Amaechi came out as gay, another retired NBA player, Tim Hardaway, said, among other derogatories, "I hate gays."
Now Ann Coulter. What a surprise!
At a Conservative Political Action Conference earlier this month, Coulter referred to presidential candidate John Edwards as a "faggot." Yes, the other "F-word!
"I was going to have a few comments on the other Democratic presidential candidate John Edwards, but it turns out you have to go into rehab if you use the word ‘faggot,’ so I—so kind of an impasse, can't really talk about Edwards," she snorted.
Now you have to understand that this isn’t something said in the heat of the battle, such as Isaiah Washington’s epithet. Nor was it a dumb remark by Tim Hardaway who should have been wise to keep his homophobia to himself. Ann Coulter is a shock writer. She makes her living off of this very type of vitriol. She, as they say, serves up red meat to the right wing bigots and homophobes that comprise much of the conservative base of the Republican Party.
To give you an idea, Slate, an online magazine, offered examples of some Coulterisms:
"The ‘backbone of the Democratic Party’ is a ‘typical fat, implacable welfare recipient"—syndicated column, Oct. 29, 1999.’"
"To a disabled Vietnam vet: ‘People like you caused us to lose that war.’"—MSNBC, Oct. 11, 1997
"I think there should be a literacy test and a poll tax for people to vote."—Hannity & Colmes, Aug. 17, 1999
Get the picture?
Her calling Edwards, who is an obviously straight man, a "faggot" is not surprising, and we shouldn’t be dismayed by this witch (no offense to witches). But the significance of this comment and the others cited earlier is more about the action and reaction that followed.
When Isaiah Washington called T. R. Knight a "faggot," there was a major uproar led by GLAAD and other lgbt organizations. A petition drive was underway, the show’s producer rebuked his slur, and Washington’s job on the show was in peril. Following Hardaway’s comments in an interview, he was banished by the NBA from its all-star weekend festivities in February and lost an endorsement. The NBA Commissioner swiftly denounced his remarks. The Continental Basketball Association also disassociated itself from Hardaway.
Being anti-gay or saying anti-gay stuff could cost you. And that is precisely the way it ought to be.
Coulter’s offense prompted a similar backlash. Another petition drive was launched that was directed to Universal Press Syndicate, which fans out her idiocy to newspapers. At least four newspapers have since dropped Coulter's syndicated column, and a letter-writing campaign has been directed at major TV networks demanding they don’t include her commentaries. In addition, three corporations, including Verizon, stopped advertising on Coulter's web site after she made the comment.
John Edwards, who is not quite "there" yet on marriage equality for gays and lesbians, successfully exploited her slur and exceeded a goal of raising some $100,000 in "Coulter Cash" from it. Of course, other Democrats, led by Howard Dean and Senator Edward Kennedy, predictably called it hateful, and that it should not be part of the political discourse.
The leading Republican presidential hopefuls— Rudy Giuliani, Sen. John McCain and Mitt Romney—provided tepid protests, mainly characterizing her slur as "inappropriate." Other notable Republicans who attended the event, such as the equally nefarious Vice President Cheney, said nothing in response. Way to defend your daughter. Dick!
Later, she followed with a lame, flippant explanation that fortunately no one believed.
As soon as Coulter spewed her homophobic venom, there was a brief collective gasp in the audience. That was followed immediately by applause from the homophobes attending. Anyone who saw the clip on the news or on You Tube would have clearly noticed that reaction.
The first thing I thought listening to the anti-gay crowd applauding with approval Coulter’s remark is that this is going to kill the Republicans. And I think I’m right on this one.
Republican politicos scrambled to distance themselves from her—who many rightly see as an embarrassment—but she will forever be linked to Republican dogma. This will have an effect in 2008 where the independents and centrists in the country will be decisive in the national election. These folks do not care much for the homophobia that Republicans manage to use as a wedge to divide the country. They witnessed how the Rove-led campaign for George Bush in 2004 and the congressional elections of 2006 used the fear of gay marriage to win votes, and they didn’t like it.
They will recall who (conservatives, read: Republicans) applauded Coulter at the conference, which will be remembered more for Coulter’s calling Edwards a faggot than anything else that went on there. This will reinforce the GOP’s image as homophobic, no matter how often they characterize her remarks as "inappropriate."
Equally significant is the nearly universal condemnation of her epithet. The newspapers that dropped her column were refreshing. Coulter makes her living with her evil style, but sooner or later she will have truly gone too far.
Maybe America is waking up. The hope is that using the new "F-word" will be just as deleterious as using the "N-word," and hate will be costly to the haters.
Posted by Steve Charing at 3:53 PM

Coulter, looking better than she ever has before...LOL, from Americablog: http://www.youtube.com/watch?v=ARY9ka2o2J4

Ann Coulter and Fox News: as hateful as they are inaccurate.