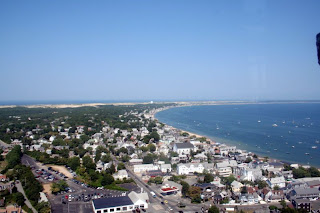 By Steve Charing
PROVINCETOWN, MA—Upon making my 20th visit to this fabulous gay resort, I can reflect upon how Provincetown (P-Town) has changed since my first brief stay during the summer of 1975. What was then a gay playground-by-the-sea for primarily New Yorkers, New Englanders and Canadians, has evolved into a global Mecca, and it isn’t unusual to see as many people vacationing here from San Diego as Amsterdam.
To be sure, much remains the same over these three-plus decades. The ice cream cones and pizza continue to be tasty. The Lobster Pot restaurant is always filled to capacity. The Boatslip tea dance remains a standing and modeling show by the water’s edge. The ocean is bone crunching cold. The cabarets and street theater are as outrageous and campy as they have ever been.
But there have been noticeable differences, too. With the expanded popularity there are, of course, the soaring prices of cramped guesthouse rooms, pricey dinner menus, increased cover charges at the bars and skyrocketing property values.
More straight families partake in the Cape Cod ambience of P-Town now, as acceptance of gays and lesbians is broadening. Earlier on, they were a rare presence.
There isn’t as much tawdry "action" at either the dunes or the notorious cruising at the "meat rack" because the emergence of HIV/AIDS and heightened police awareness kind of put the brakes on that.
But the most dramatic change in P-Town from a sociological and political standpoint is the fact that many of the gay and lesbian couples strolling down Commercial Street, if they are residents of Massachusetts, are actually married. And other same-sex couples from the state flock here to join in on the nuptials. That phenomenon would have been too surreal to even be imaginable back in 1975.
Since 2004, when gay marriage became legal in the Bay State as a result of a court edict, over 8,500 same-sex couples were issued marriage licenses. While some states have allowed for civil unions—a compromise of sorts between pro-marriage equality forces and anti-gay marriage types—Massachusetts remains the only state in the nation that allows for same-sex marriage. Civil unions afford a few statewide benefits, but they are separate and unequal to marriage. And same-sex couples in these arrangements are relegated to a status beneath heterosexual couples.
With their Governor’s support, the Massachusetts legislature recently rejected an effort to put the marriage issue on the ballot in 2008 that could have resulted in an amendment to the constitution banning same-sex marriage. Therefore, the marriages that take place in Provincetown or elsewhere in the state will continue at least until 2012.
As gay and lesbian Marylanders await the ruling from the Maryland Court of Appeals as to the legality of same-sex marriage based on a high-profile lawsuit, it is important to note that civil marriage brings in well over a thousand rights, benefits and responsibilities.
Unfortunately, most of the significant benefits that would be afforded couples as a result of marriage are within the federal domain. In 1996 President Clinton signed a bill advanced by a hoard of gutless Congressmen and Senators called the Defense of Marriage Act (DOMA). Facing re-election, Clinton was backed into the corner and had to go along with this seemingly unconstitutional law lest he be portrayed as anti-family.
One of the provisions of DOMA allows states to refuse to recognize same-sex marriages that are carried out in other states. The other key provision defines marriage as a legal union between one man and woman as husband and wife. As such, the federal government does not recognize same-sex marriage be it from Massachusetts or anywhere else. The consequence of that is that there can be no benefits stemming from Social Security, survivor and inheritance laws, federal retirement pensions, tax advantages and a host of other federal benefits.
Those gays and lesbians who are married and are enjoying their bike rides in P-Town and sampling the famous taffy are not reaping the awards that the heterosexual couples take for granted. The only similarity is that they can say they are married. But the federal restrictions on same-sex couples deny them the federal protections, which would be far more beneficial and meaningful financially.
The solution—and it’s a very steep hill to climb—is to repeal DOMA or have it successfully challenged in what is now an anti-gay Supreme Court.
More and more people are coming to the realization that marriage as an institution is not threatened by gays as much as it is from straight people. Massachusetts, after allowing same-sex marriage, maintains the lowest divorce rate in the country. The sky did not fall beginning in May 2004 when the first same-sex marriages took place. On the other hand, nearly half of all heterosexual marriages in the U.S. fail.
A shocking thirty-seven percent of all babies in 2005 were born out of wedlock. If couples having children that bypasses the commitment of marriage doesn’t threaten the institution, I don’t know what would.
This is the message that we must convey to get on the path to repeal DOMA. We must also maintain that we are seeking civil recognition with all the potential benefits, not a religious blessing. It’s all about equality and justice.
The younger, more tolerant and open-minded generation will lead the way. Perhaps some day, when all gay and lesbian married couples from Massachusetts, Maryland and beyond visit enchanting P-Town, they will be sharing a meal at Bubala’s or Bayside Betsy’s as completely married in the eyes of the U.S. government and in receipt of the full benefits and recognition they deserve.
Posted by Steve Charing at 8:55 PM