In Defense of Pride 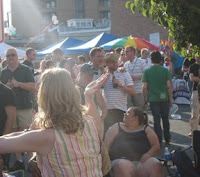 By Steve Charing
It’s painful for me to admit I’m old, but with one exception I have attended every single Baltimore Pride parade/festival since 1978 when it first took place along Waverly’s 31st Street. Later on, I was part of the then Baltimore Gay Paper’s delegation when it joined a handful of other marchers down Park Avenue in 1984 that ultimately became Baltimore’s first ever Pride parade in front of yes, only a handful of people.
Many of those attending this year’s Pride were not even born then. And I am sure they (as well as some others) don’t even know the roots of the Pride celebrations. But I’ve basically seen them all.
Over the years, the location, leadership, scope and size of the annual Pride galas evolved and with mixed results. Baltimore Pride has been run by the GLCCB throughout its history and emerged as a primary revenue source for the Center.
It wasn’t until three years ago, however, when Scott Baum and Ron Crognale took the helm in planning and executing Pride that it reached, in my view, a new level of success. It developed into a celebratory series of high-energy events that brought a diverse community out—a dramatic change from the early years.
This year, the behemoth task was taken over by Joel Rosado, who, I am sure would credit the efforts of Baum and Crognale and their legion of volunteers for establishing such a good foundation.
And on Rosado’s first attempt, I thought Pride went well again this time. There were flaws, to be sure, as there would be in any large undertaking. For example, Pride "Security" volunteers allowed groups of people to inconsiderately camp out on beach chairs on Eager Street’s sidewalks prior to and during the block party that made a congested thoroughfare even more challenging to negotiate. And I am certain other folks had their list of "issues" concerning the two-day event as well.
But I would like to address some of the comments published in a Letter to the Editor in the last issue of OUTloud by Joseph Kortash. He criticized Pride 2007 on all levels, basically characterizing it as "same old, same old."
I hope he can correct me if I am wrong, but I doubt that Mr. Kortash participated in any of the planning meetings that other Pride volunteers attended where he could have expressed his views and, perhaps, effect the change in vendors and entertainment he craves. To be honest, I doubt he volunteered at all for Pride.
Furthermore, I question whether Mr. Kortash appreciates the extraordinary amount of time and effort needed to carry out the myriad logistical details that are essential in producing a huge event, such as obtaining permits, vendors, entertainment, technicians, contracts, police coverage, sanitation, etc. If he did, it wasn’t acknowledged in his letter.
As for the parade, Mr. Kortash found it embarrassing to bring his straight friends because of the antics and attire of some of the marchers. It is true that footage from gay pride parades that focused on the so-called extreme behavior have been co-opted by gay rights opponents, especially religious conservatives, in an effort to suppress our progress towards equality. They use these images primarily to shock "middle America" and instill fear.
I agree that some of it is in bad taste and not conducive to a parade that has increasingly attracted children. Nonetheless, since the first gay pride march in New York in 1970, it has been a tradition to allow free expression from such a diverse community.
I think the "shock value" is waning because people have seen this before and coming to realize it is a minority of the community, not representative of it. The debate, however, will continue; Mr. Kortash does have a valid argument.
Mr. Kortash doesn’t like being "hounded" at the festival. Who does? But such worthwhile groups like Equality Maryland (he cited it specifically in the letter) and the Human Rights Campaign are working hard to secure rights and protections for Mr. Kortash and other lgbt people. If those in our community were not so politically uninvolved, there would be no need to "hound" anyone.
The festival affords an excellent opportunity for organizations to present a message and garner support to allow them to help all of us. This occurs at all Pride celebrations, and it should.
One final point about the GLCCB and Mr. Kortash’s quoting his chat room buddies who labeled the GLCCB "a mess." The debate about the Center’s efficacy has been ongoing since its inception, so there is nothing new here. For one, I have disagreed with the Center’s leadership and board over the years on some of their decision-making, personnel and the weaknesses in the Center’s financial management/transparency.
Yet ever since Harvey Schwartz moved the Center from a small, below street-level apartment on Maryland Avenue in 1980 to the current building on Chase Street, there was never a question in my mind as to the legitimacy of the organization’s purpose and mission.
Pride is a vital source of income for the GLCCB to help carry out its needed programs and services. Although I had no major complaints, questions by others have surfaced as to whether or not the GLCCB is the best entity to run Pride. The location, entertainment and vendors have been challenged, and not just by Mr. Kortash.
Perhaps an answer would be to hold an independent community meeting later this summer or early fall to hear the grievances about Pride, and more importantly, develop solutions. I think Mr. Kortash would be an excellent person to organize such a meeting.
Posted by Steve Charing at 9:16 AM