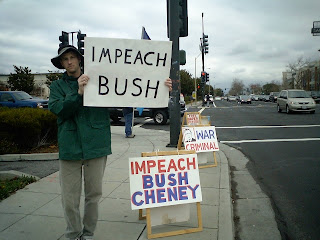 It’s tempting and legitimate, but impeachment could hurt the Party
By Steve Charing
As momentum continues to gather towards a possible impeachment of Vice President Dick Cheney and/or President Bush, those aligned with the Democratic Party need to step back and examine the wisdom of such a move.
There is no question that both Cheney and Bush have committed impeachable offenses; i.e. "high crimes and misdemeanors," which along with treason, constitutes the benchmark, however flexible, for grounds for impeachment. Notwithstanding the trampling of the Constitution and the environment by these individuals, either or both should be held accountable for the lies that pushed us into a needless, costly war and made the U.S. more vulnerable to terrorism.
More and more of the country are fed up with the Bush administration as his approval rating stands at an all-time low and the lowest since the good-old days of Nixon. And Cheney’s approval numbers probably don’t register; they’re that low.
The incompetence and arrogance of Bush-Cheney have been evident to the point that this is now what we expect of them. The considerable amount of antipathy towards Bush-Cheney stems mainly from their lies about Iraq and an impressive list of other failures. Even once-loyal Conservatives have begun to head for the lifeboats because of the administration’s mismanagement of the war, uncontrollable spending and their position on immigration.
The lgbt community has their own gripes with this team. It starts with the cynical wedge issue of gay marriage during the Bush-Cheney 2004 re-election campaign under the direction of puppet master Karl Rove. They sought to peel off votes that would otherwise have been cast by socially conservative and religious Democrats. Many believed that the tactic worked in such battleground states as Ohio where a constitutional amendment that would ban "gay marriage" was strategically placed on the ballot.
Gays should also be ticked off by the Bush Supreme Court nominees, John Roberts and Samuel Alito who now join homophobes Antonin Scalia and Clarence Thomas. They are one vote away from killing any progress towards equality or worse, rolling back some gains. Along those lines, Bush managed to nominate an anti-gay physician—Dr. James Holsinger—to be the Surgeon General, and he loaded up the Justice Department with a disproportionate number of attorneys who were products of the Christian law school, Regent University. It was founded by none other than homophobe Pat Robertson.
But it is clearly the disastrous war in Iraq and the lies that brought us there that turned the public away from Bush and Cheney. The cost in dollars is immense, and the cost of lives and ruined lives is immeasurable without one solitary thing being accomplished that would directly benefit our country. In fact, this dumb war caused us to diminish our pursuit of al-Qaeda and Osama bin Laden—the true perpetrators in 9/11. That made us more exposed, and the war helped to recruit more terrorists.
Moreover, our standing in the world receded to such a low level that it is virtually impossible to secure international cooperation on the war on terror. Add that to the Administration’s unwillingness to engage in substantive diplomatic dialogue causes us to be more isolated than ever. This is not a good position to be given the globalization that surrounds us.
So why not impeach?
The results of the 2006 elections were a clear sign that the country was embarking on a political realignment away from the warlike, religiously-driven dogma of the current administration. The war in Iraq and the numerous scandalous activities by government officials led the voters to scream for CHANGE.
The Republicans are going down in flames; there is no question about it. They are quickly losing the support of moderates and independents as well as displeased evangelical voters. You can thank Bush and Cheney for that.
The 2008 elections, barring any unforeseen change in circumstances, should easily add to the Democrats’ majorities in the House and Senate (where more Republicans than Democrats must defend seats), and the White House is surely within grasp—even if Hillary is the nominee.
Impeachment would be politically risky and conviction unachievable. In our history, only a handful of judges were ever convicted through the impeachment process.
The argument that impeachment during a time of war is irresponsible and perhaps unpatriotic is nonsense, of course. That is because we wouldn’t be in a time of war had it not been for the apparent impeachable actions on the part of the President and Vice President. However, that type of accusation—that it is irresponsible—has a chance to resonate with many voters.
When President Clinton was impeached (not convicted), his approval ratings, although much higher than Bush’s now, did not decline. Rather, he garnered a lot of public sympathy for a man who had been an effective president that yielded budget surpluses and kept us out of a protracted war. The impeachment process was widely seen as a highly politicized effort to derail his presidency that centered on a private matter that was not affecting the welfare or security of the state.
The last thing Democrats need is to mitigate Bush’s free-fall into oblivion by making him a sympathetic figure. Equally significant, by not impeaching Bush or Cheney, the Dems won’t have to fall into the "unpatriotic" trap that the GOP knows how to spring with such skill and efficiency. "They are impeaching the Commander-in-Chief during a war, thereby weakening our nation. That is unpatriotic if not treasonous."
Impeachment proceedings would be a dragged out process that will likely turn off the electorate at a time the Democrats need the voters to be energized to rid the country from these deceptive and incompetent jerks and their GOP following.
Democrats, let Bush and Cheney take down the GOP on their own. They are doing an effective job of it. Don’t make the public feel sorry for them or give an excuse to pummel the Dems as unpatriotic.
Don’t impeach; the rascals will be out of office soon enough.
Posted by Steve Charing at 10:30 AM

I understand your argument, but at this point in time I don't think that impeachment would generate sympathy for Bush. I think it would restore pride in this country for the majority of Americans. I know it would give me hope.

To let Bush fade into the sunset untouched, after all the damage he's done to our country, our pride, our financial stability, our environment, our standing in the world and our collective psyche would leave us with a permanent, stinking stain. Not to mention his useless war that has killedalmost 4,000 Americans for nothing.

Bush won't fade into the sunset untouched. He had decimated the GOP as evidenced by the 2006 elections and the prospects for 2008. For Dems, that is the golden ring. Congress can't even stop a Bush-driven surveillance program, much less push through articles of impeachment. It will not happen, so it is futile to try it and risk the wrath of a country who is already moving to their side and is weary of patisanship.