At Least the Dems Showed Up 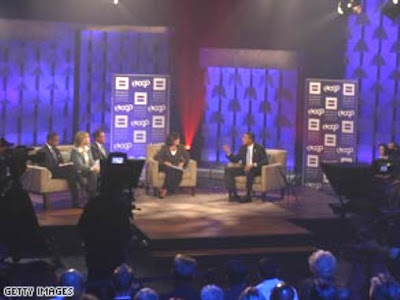 by Steve Charing
The historic HRC/LOGO Visible Vote ‘08 forum that took place on August 9 did not break any new ground as far as the content was concerned. But it was the first time a forum that dealt almost exclusively with lgbt issues was televised and appeared on the Internet live.
"Tonight was an important night in the fight for equality for GLBT Americans," the Human Rights Campaign, a co-sponsor, said in a statement following the forum. "We pulled the curtain back a bit and gave all Americans a deeper look inside the candidates' core beliefs about the issues that affect our community."
Six of the eight Democratic candidates for president appeared in an informal, almost talk show-style setting in West Hollywood. The only two who did not were Sen. Joe Biden and Sen. Christopher Dodd who had scheduling conflicts. All Republican contenders were invited, and they all declined.
The event was seen on LOGO—the event’s other co-sponsor—an all-gay cable network that reaches some 26 million homes.
Each candidate was interviewed separately by a panel consisting of HRC president Joe Solmonese. Lesbian singer-composer Melissa Etheridge and Washington Post editorial writer Jonathan Capehart and was given approximately 15 minutes to field questions. The moderator was journalist Margaret Carlson.
Prior to the forum, some gay journalists and bloggers were whining about the composition of the panel. In particular, they targeted Etheridge, citing more "qualified" and "experienced" individuals who might grill the candidates with strong follow-up questions and forcing them to respond directly.
But Etheridge not only acquitted herself well during the two-hour forum (as did the other panelists), but she provided two of the more dramatic moments during the exchanges.
In a question posed to a seemingly uneasy Governor Bill Richardson (NM), Etheridge asked if he believed homosexuality was a choice. He said it was, and after being given an opportunity to clarify or perhaps reverse his response, he made a foolish comment that he is not a scientist. The gaffe proved to be a low moment for Richardson as the 200 invited guests in the audience groaned. Afterwards, his campaign released a statement that said he did not believe people choose to be gay. A little late, I’m afraid.
The other significant exchange occurred when Etheridge was telling Sen. Hillary Rodham Clinton that she had great hopes for her husband when she came out at his inaugural gala in 1993. But during his presidency she charged that gays were "pushed under the bus." Mrs. Clinton rejected that and defended her husband’s record on lgbt issues.
The questions, however, focused mainly on same-sex marriage, employment discrimination, health care, and the military’s "don’t ask, don’t tell" policy, although an excellent question concerning homophobia in the African-American community was asked of Sen. Obama by Mr. Capehart. Mr. Obama said he has addressed this issue with black ministers. All of the candidates stated their desire to end "don’t ask, don’t tell" and support ENDA—the federal employment non-discrimination act that is poised for a vote in Congress.
While Rep. Dennis Kucinich and Mike Gravel—two long shots for the nomination—were unabashed supporters of same-sex marriage, the other four could not bring themselves to share that position. They backed civil union arrangements with the full slate of federal and state benefits that legal marriage would bring, but they could not simply agree to "same-sex marriage," almost apologetically and were not clear in providing a good reason.
But I can help them out. They want to win the general election should they capture the nomination. The country isn’t quite there yet for same-sex marriage according to recent polls. And although I believe that Clinton, Obama and Edwards deep down are personally sympathetic to the cause, for political reasons they cannot state directly they support gay marriage if they have any hopes of winning. Maybe in a couple of election cycles down the road candidates will.
These contenders understand the consequences of such a stance as the Republicans will distract the nation from their own horrendous record over the past eight years and scare Americans as they did in 2004 about an issue that truly doesn’t belong in the presidential campaign. Even Bill Richardson, who has been tagged by most gay pundits and bloggers as the loser in this forum, admitted he would do only what is "achievable."
The lack of full-throttle support for same-sex marriage by the leading candidates have angered many gay activists.
But the contemptible gaggle of Republican candidates declined to appear at the forum, and it was wise of them to make that decision from a political perspective. The main reason is they had nothing to gain.
For one thing, they have anti-gay positions on virtually all lgbt issues. They will not win over any gays or lesbians based on their records or stances. The other reason is if they are perceived in any way to be supporting the notorious "gay agenda," they would have a tough time during the primaries where the conservative base is largely unsympathetic to gay causes.
At least the Democratic candidates showed up and gave thoughtful answers to very pointed questions—often being put on the spot. The gay vote constituted only 4 percent of the total cast during the 2004 election, and of that, 73 percent voted for John Kerry. Yet these candidates rightly see the value of the gay vote during the primaries as large voter turnout from gays and lesbians could affect the outcome, and gays frequently make disproportionately more campaign donations.
Nonetheless, this forum illustrated the struggle for politicians to deal with same-sex marriage even in front of a friendly audience. The candidates distinguished themselves from the Republicans, but with the exception of Kucinich and Gravel, they did little to separate themselves from their fellow Democratic opponents on this issue.
Posted by Steve Charing at 9:10 AM