Straight Eights Cruisin’ Down the Road for 25 Years 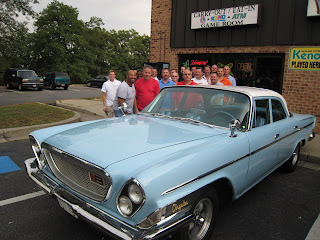 While driving down Route 1 in the Savage-North Laurel area in Howard County on the afternoon of August 19, I spotted a parking lot at a strip mall that featured an array of vintage cars.
There was a ’55 Chevy, a ’66 Ford Galaxie, a ’62 Chrysler Newport, a ’61 Buick Electra, a ’68 Ford Mustang and a host of other various models and years.
Was this a car show? No, it was a monthly gathering of members of a regional lgbt car enthusiasts club called the Straight Eights—an ironic term for an lgbt group that stemmed from a pre-1950’s engine configuration that featured eight cylinders in a single row. It is a fast-growing club with over 170 dues-paying members that serves the Baltimore-Washington, D.C. area.
A couple of dozen members of Straight Eights on this sprinkly day parked their cars on the open parking lot outside PW’s Sports Bar and Grill, a convenient location which has evolved into the only gay bar in Howard County. (They usually draw far more but the wet weather apparently kept some folks and their cars home.) The monthly event, which began this past May, occurs on the third Sunday at 3:00 p.m. It is called a "Cruise-In" and attracts current and new members from all over the region.
They come to ogle other members’ cars from the exterior finish and features to the interior upholstery and accessories. They network, share stories and tips and socialize in an informal atmosphere that includes downing a couple of drinks and perhaps a meal inside PW’s.
"We welcome car nuts seeking to celebrate their common love for automobiles of all types, from vintage to contemporary, in an accepting atmosphere," according to their website.
The Straight Eights was started in 1982 by three guys who placed an ad in the Washington Blade seeking others who share their love for cars. Slowly but surely, the club expanded to their peak total today as more and more gays and lesbians in the DC-Baltimore region sought an outlet for their passion for cars while finding an alternative to the usual bar scene.
Club vice-president Howard "Smitty" Smith, of Prince George’s’ County and a member for eight years, said that membership increased by a whopping 50 during the past two years alone as the group is increasing its visibility. Indeed, the Straight Eights have appeared in Baltimore’s Pride festival as well as DC’s Capital Pride and Black Pride events and have also been "out" at various bars.
The Straight Eights (representing Baltimore-Washington) is one of 28 regional lgbt car clubs in the U.S. that are under the umbrella organization, the Lambda Car Club International. The LCCI is the largest collector car club for gays and lesbians in North America with a membership of over 2,000.
"We offer a comfort zone for gays and lesbians to be themselves and who have a passion for cars," says Jim Byers of Washington, D.C., the affable president of the Straight Eights. "Straights are welcome, too," he points out and emphasizes that "diversity and acceptance will be the expectation and not the exception."
"We’re open to lgbt car-lovers of all areas of interest—vintage, exotics, ‘tuners,’ hot rods, sports cars, or just an enthusiast’s passion for things automotive." Byers adds, "You don’t need to have a classic car or any car to join us."
The club’s newsletter, Car Talk, stokes interest further by providing useful information and photos and offers buying and selling opportunities for members by placing ads.
Smitty, the vice-president who owns an auto repair shop not far from PW’s, says the group has members with varying degrees of mechanical aptitude skills. "Some do their own mechanical work and others ask me to change their light bulb. You don’t have to be a mechanic to enjoy the Straight Eights," he explains.
To offer variety and broaden its appeal, the club organizes a wide range of activities that are not necessarily car-related. There had been a recent trip to the Masonic Temple in Arlington, Virginia, and last year members enjoyed a tubing excursion on the Rappahannock River in West Virginia.
Closer to home, Towson’s Tom Lalley, the Straight Eights treasurer, adds that the group has visited the Baltimore Museum of Industry and the Visionary Arts Museum on Federal Hill and enjoyed cookouts at Patapsco State Park.
There have also been tours of car restoration shops to whet the appetite for those who see cars as more than just transportation.
The Straight Eights’ big annual event, however, is the Beach Ball held in Rehoboth Beach. Each regional club from the LCCI puts on an annual weekend car show called an Invitational with the Beach Ball being the Invitational for the Straight Eights.
This Invitational will also serve to commemorate the Straight Eights Silver Anniversary. It features a free Collector and Vintage Car show presented by its members at Grove Park on September 22 from Noon until 3:00 p.m. The park is located at Rehoboth Avenue at Shaw Circle, and the entire public is invited to attend.
Of course, the car show is the main component of the Beach Ball Invitational weekend. The other events that weekend, including an awards banquet, are designed for members only and will take place at the Atlantic Sands Hotel. Beach Ball is expected to draw over 140 LCCI members and nearly over 100 collector cars from all along the East Coast.
Says President Jim Byers, "Expect to see Rehoboth Avenue transformed into a sea of projectile hood-ornaments, sparkling chrome, and tail-fins in candy-store hues."
For more information about the Straight Eights, cruise over to their website at http://www.straight8s.org/.
Posted by Steve Charing at 4:40 PM