With each year, the annual ritual of holding LGBTQ Pride festivals and parades all over the world is gaining more media coverage and popularity.  These celebrations have been taking place for 50 years since the first one in New York City marked the one-year anniversary of the Stonewall uprising where patrons in the Greenwich Village underground bar fought back against yet another police raid.

Pride, as it is simply called, has had different meanings to different people. To me it is acknowledging the adversity LGBTQ people have had to endure throughout their lives, and that we are proud that we have survived though sadly, not everyone has.

To some straight folks who are not allied with the LGBTQ community, there has been a growing distaste for this traditional event and have mocked us with calling for or establishing “straight pride” parades to counter it. One, for instance, is being planned in Boston.

Even merchants see a profit in this development and are selling straight pride t-shirts and similar merchandise online. They are the opposite of the familiar rainbow colors; they’re black, white and (perhaps 50) shades of gray.

The notion that straight folks need to demonstrate their pride is ludicrous, and that’s being mild.  LGBTQ Pride, as I indicated, is a celebration of enduring the myriad manifestations of hatred directed towards our community.  Straight people have not had to grapple with being straight in our society. Consider:

• No straight person has been fired from their job or not hired for being straight.

• No straight person has been kicked out of an apartment or disapproved of a lease because he or she is straight.

• No straight person has been assaulted or killed for being straight.

• No straight person has to hide their sexuality from  family members, classmates, clergy, co-workers, bosses, friends and neighbors.

• No straight athlete has been harassed in the locker room or denied an endorsement deal because he or she is straight.

There are more contained below in this popular meme. 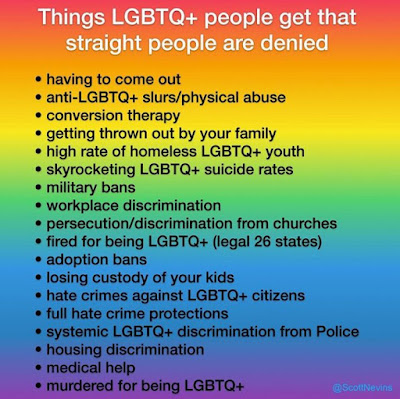 People took to social media to voice their displeasure at the proposed straight pride parade in Boston.

“Straight” pride is culturally irrelevant. It means nothing, except as an insult and degradation of LGBTQ+ people. Such a statement isn’t about equality, but is an exclamation of continued superiority. It screams: Look at me! I’m insecure as hell!”

Says another, “Holy f***ing shit balls! Have you ever BEEN to pride??? This isn't even about ‘well I think I should support the LGBT’s, this is about FUN!  Just think for three seconds…how much fun do you think these ‘straight pride’ idiots are going to be having? Stomping around in their white golf shirts and Dockers khakis chanting slogans?”

And from one who is straight, “They have the right to assemble just like everyone else, but to call it a 'Straight Pride' parade is really a misnomer. They should just say what they mean, and say we are Anti-Gay Pride. Everyone knows what they are about, and trying to call it something that they think will be more politically correct doesn’t replace their underlying theme. I certainly won’t be participating no matter what they call it. It is going to be a bunch of narrow minded people who are intimidated by the idea that being gay is acceptable and that LGBTQ people should have the same rights and recognition of their relationships that heterosexuals enjoy.”

There are a number of reasons why straight folks support this.  I believe that many would like to push LGBTQ folks back in the closet.  They don’t like us out and proud.  The Pride celebrations don’t conform to their beliefs that we are inferior, different, and an abomination. Thus, there is resentment.

As we approach Howard County’s first ever Pride festival (HoCo Pride) on June 29 at Centennial Park, marking the 50th anniversary of Stonewall, opponents, I would say haters, have taken to social media to voice their displeasure. They have posted memes like this one 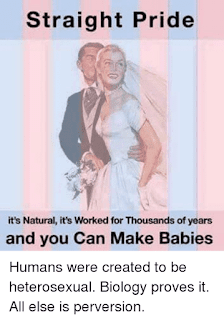 They can mock all they want. The LGBTQ community and its growing number of allies need to ignore the taunts by a noisy few and enjoy our special day.  As the theme for HoCo Pride states, our community and supporters should Remember, Resist and Rejoice.

We expect a large representation of straight allies attending the festivities and to them, there is no need to have a separate, silly straight pride.  This one will be far more fun and far more meaningful.

For more information about HoCo Pride, visit the website.

Posted by Steve Charing at 1:11 AM