Should Trump Feel Optimistic About 2020?


The president is banking on a lot to break his way to overcome his unpopularity. 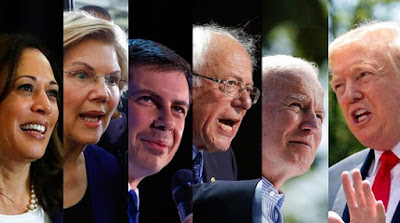 We’re more than 16 months away from the presidential election and the Democratic field of challengers exceeds 20. Therefore, so much can happen in that time span that could alter the political landscape one way or the other.

I make no predictions as to who the eventual Democratic nominee will be nor do I speculate on whether or not Trump will ultimately be impeached. (It’s not because I don’t want to, it’s because I simply can’t.) These are all fluid developments. The one constant has been Donald Trump’s job approval ratings, which have ranged from the low- to mid- 40’s throughout his presidency.

Despite what has been characterized as a good economy, his numbers do not portend success in the election as he has shown to be president of his base only and not the country as a whole. The failure to expand upon his base is his likely undoing, but after 2016, who knows?  He won the Electoral College with some 46 percent of the vote.

Accordingly, Trump is banking on a number of conditions to exist up to the election to overcome his being the most unpopular president in a more than a generation.  Some of these are legit but others are far-fetched.  I handicap each of these with “diamond” ratings—one diamond being next to impossible and five being a slam-dunk certainty—in no particular order. 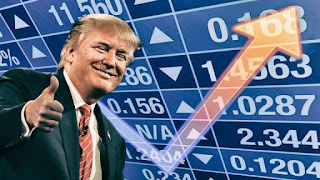 The Economy. Most any incumbent president would see their reelection chances soar if the economy is good (“It’s the economy, stupid.”). However, beauty is in the eye of the beholder. While certain statistics like growth, unemployment and the stock market appear to be favorable, not everyone in the country is benefitting directly. Wages are stagnant necessitating people to work multiple jobs to keep up with rising prescription drug prices among other expenses.  Factory jobs continue to be lost, and the Trump-created trade war has hurt many farmers.

As for the stock market, most people in the know understand that the law of gravity is king here.  The markets are due for a correction and could tank at any time between now and November 2020.  A recession is certainly possible as well, according to some economists..

So, will the economy remain favorable to Trump as election nears?  ♦ ♦ 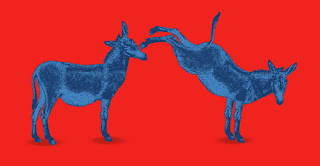 Democratic Infighting. Make no mistake there is considerable tension among Democrats regarding priorities.  Is it more important to defeat Trump or push for policies that bend leftward?  Is a single payer for health insurance and scrapping private insurers preferable to massaging Obamacare?  What bold policies are desirable versus what can actually be accomplished?  Should Congress impeach the president based on evidence contained in the Mueller Report or should it assume such an action would benefit Trump in the general election? And, of course, the conflict between Speaker Pelosi and four freshman women of color still festers.  These are just a few of the issues that divide Democrats at this time.

Nonetheless, I believe 2016 is fresh in the minds of Democrats.  We saw what happened when the party was not unified.  Dems now understand the inherent hazards of Trump being re-elected, and they will likely get behind the eventual nominee. But you never know what the Dems are capable of when it comes to elections.

Should Trump bank on a Democratic circular firing squad?   ♦ ♦ ♦ 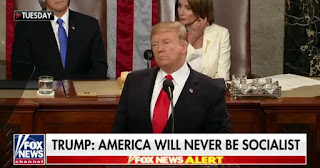 The Socialist Label. Trump is a master of messaging and name-calling, and it helps to keep his supporters in line.  More precisely, Republicans in Congress are so terrified of Trump and the power of his tweets that they have sold their souls to him.

There is no secret Trump plans to roll out the “Socialist” brand on Democrats regardless of the nominee.  Radical, left, socialist Democrats will be the mantra.  Even Trump lapdog Lindsey Graham referred to the four women of color involved in the Pelosi controversy as “Communists” underscores how low they will go.

Though popular programs such as Medicare and Social Security can be considered socialist by some definitions, the moniker is treated now as a weapon.  To be clear, the term socialist was used against Barack Obama in 2008 without success.

Us Against Them: Donald Trump’s continuation of his long-held racist and xenophobic beliefs is a winning strategy, according to people in Trump’s orbit.

Immigration will likely be a major issue in the general as Trump stokes fear, resentment and division.  But images are more powerful than anything Trump can tweet, and the footage showing inhumanely overcrowded cages on the border and children separated from their families are devastating.

His tweet that that Reps. Alexandria Ocasio-Cortez, Rashida Talib, Ilhan Omar and Ayanna Pressley should “go back and help fix the totally broken and crime infested places from which they came” is yet another manifestation of Trump’s ignorance and desire to divide Americans.  Believing that incendiary tweets like this will firm up the bigoted elements of his base is safe to assume.

However, Trump did not expect the blowback to be so harsh (though hardly a peep from the Trump-intimidated GOP Representatives and Senators) from the media, Democrats and independents that it seemed to have backfired and caused feuding Democrats to close ranks in unity against the profound racism emanating from Trump.

Remember Trump claimed that U.S.-born Judge Curiel could not be fair in presiding over a case involving Trump University because of his Mexican heritage. Then there are these:  “Mexicans are rapists”, the Gold Star Khan family, Charlottesville comments, the attack on some African-American celebrities as “low IQ”, "shithole countries",  etc.  Nevermind his examples of racism prior to his running for president. The racism and xenophobia are palpable and ongoing.  Yes, his bigoted base will be motivated to vote, and this serves to keep them enthused.  But will it work in the general election? ♦ ♦ 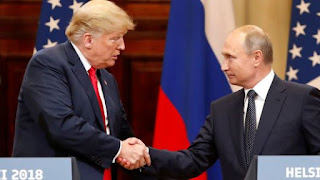 Russia, Russia Russia! In my view, Trump doesn’t become president if Russia hadn’t interfered by particularly shaping and reaffirming people’s attitudes against Hillary Clinton and for Donald Trump.  Robert Mueller was very clear about that after the multi-year investigation into Russian meddling in the 2016 election.

Trump had the audacity to side with Putin’s version of events over that of our intelligence community (some patriot!). He doesn’t take the interference seriously because he knew it helped him and other Republicans as well. Even worse, he has done next to nothing to prevent a similar attempt by Russia to plant doubts in the minds of Americans regarding the reliability of the election results.

Posted by Steve Charing at 4:44 PM