Jay’s on Read Sold but Nothing Will Change 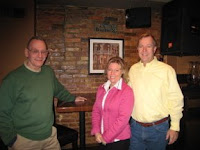 By Steve Charing
David Nash (r.) and Linda Swift (c.), a straight couple from Boston, visited Baltimore last year on business. They happened to come across Jay’s on Read, the popular upscale Mount Vernon piano bar that has been a mainstay in the local gay scene since August 2006.
The couple returned several times as customers. David noted, "We enjoy the crowd here. It’s a good place to have fun."
The couple fell in love with the tavern-style, warm atmosphere and the mixed, mature clientele that Jay’s featured. They had been looking at some 20 bars and pubs in the Baltimore area that had been on sale and were seeking one to call their own. "This is it," said Linda following their visits to Jay’s.
The problem was, Jay’s wasn’t on the market. But by sheer coincidence, the realtor for the Nash-Swift couple knew the realtor of Jay’s owner, Jay Lamont (l.), and both happened to be customers of Jay’s as well. The two realtors met several times about a possible transaction.
"They made an offer I couldn’t refuse," said Lamont. He wasn’t planning to sell the business this soon but realized that at his age he would like to stop working 70-hour weeks and do some relaxing of his own.
Jay Lamont had always wanted to buy a building downtown and start a business—especially a place where the clientele would feel more comfortable in a quieter atmosphere. When the offer was made during the Christmas holidays, he thought, "I achieved that goal and want to enjoy the rest of my life," he told OUTloud. "Now I want to be a customer." Lamont will continue to own the building where the bar is housed.
As the new owners officially take over on March 3, it is important to note that there will be no changes on the horizon. That also includes the name of the bar, which will remain Jay’s on Read.
All the employees and performers will be retained, and the transition should be seamless. "Jay has been a big help getting us acquainted with the business and customers," said Linda. "Jay has done a terrific job, so there’s no need to change anything." Added, David, "If it’s not broken, don’t fix it."
David Nash and Linda Swift are very much in tune to the gay scene having visited many gay establishments over the years, particularly in Provincetown, and have quite a few gay and lesbian friends. They know the market.
Prior to the official transfer of ownership, Jay’s will launch Karaoke on Wednesday evening, February 20. It will be emceed by Steve Smith who has successfully performed the same role at the Hippo for over two years.
Otherwise, Jay’s on Read will continue its tradition of cheerful piano entertainment and sing-alongs with no cover charge during its regular hours 4:00 p.m. to 1:00 a.m. Monday through Saturday.
Linda, who also runs an antique shop in Edgemere and lives with David in Sparrows Point, is so happy and excited about this new opportunity. "We just want people to come in and be comfortable."
That, too, will not change.
Posted by Steve Charing at 2:14 PM