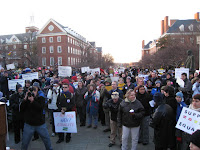 The bitter, sub-freezing temperatures pushed down further by a wispy breeze failed to chill the hearts and determination of several hundred marriage equality and lgbt rights activists at Equality Maryland’s annual Lobby Day on February 11. Over 500 had pre-registered for the event.
On a day that ironically marked the 50th birthday of Delegate Donald H. Dwyer, Jr. (R-Anne Arundel), a diehard foe of gay rights, people from all over the state and from all walks of life descended upon Annapolis. The rally, which took place at its traditional location at Lawyer’s Mall in front of the State House, saw for the first time all four of the openly gay lawmakers address a Lobby Day crowd.
Senator Rich Madaleno (Montgomery) and Delegates Maggie McIntosh (Baltimore City), Heather Mizeur (Montgomery) and Anne Kaiser (Montgomery)—all Democrats and sponsors of the Religious Freedom and Civil Marriage Protection Act (SB 290 and HB 351) that was recently introduced— assured the shivering throng that they will fight for marriage equality. "The only resolution is full civil marriage," Senator Madaleno proclaimed to the cheering crowd as a signal that the less effective concept of civil unions is not the goal.
The bill takes on added significance as the state’s Court of Appeals, by a razor thin 4-3 ruling last September, upheld the 35 year-old state law that defines marriage as between a man and a woman. The decision left the matter to be decided by the legislature.
Bill sponsors Senator Jamie Raskin (D-Montgomery) and Delegate Todd Schuler (D-Baltimore Co.)-both straight-also addressed the rally and explained that nothing short of civil marriage would bring equality.
Other speakers included Dan Furmansky, Executive Director of Equality Maryland; Susan Goering, Executive Director of the ACLU of Maryland; Rev. Andrew Foster Connors (Brown Memorial Park Avenue Presbyterian, Baltimore); Civil Rights leader Elbridge James, co-founder of the Maryland Black Family Alliance; and June White Dillard of the Prince George’s branch of the NAACP who announced her organization’s important support of the legislation.
Lead sponsor Del. Benjamin Barnes (D-Anne Arundel and Prince George's) and Co-Sponsor Elizabeth Bobo (D-Howard) stood behind the podium to demonstrate their solidarity in backing the bill.
In addition, transgender activist Mara Drummond made a moving plea to end discrimination based on gender identity and expression. A bill to accomplish that died in committee last year by a single vote when Sen. C. Anthony Muse (D-Prince George’s) backtracked from an earlier commitment and voted against the measure.
To accomplish this agenda, the lawmakers urged gays, lesbians, bisexuals, transgendered folks plus supportive straight allies to educate the other legislators about the fairness that civil marriage would bring to some 15,000 lgbt couples in Maryland and to press for an anti-discrimination measure for transgendered citizens.
In that regard, over 115 meeting appointments were scheduled to help persuade wavering lawmakers by detailing how the status quo is harmful to individuals and their families. They also thanked those who are supporting the cause. Letters (especially hand written), e-mails and phone calls are among the other tools that were encouraged to educate the legislators on the issues and express support for these bills.
Following the rally, the crowd dispersed to meet with their district legislators. There have been reports that positive impressions were made even on opponents of marriage equality.
In Districts 5B and 9B (Carroll County), for example, a petition supporting same-sex civil marriage signed by over 400 students from St. Mary’s College—more than a quarter of the total enrollment—was presented to Republican Dels. Wade Kach and Susan Krebs. "We see no reason why there is an issue here," said one of the students. "Our generation supports marriage equality."

Although the Religious Freedom and Civil Marriage Protection Act is the centerpiece of Equality Maryland’s agenda during the 2008 General Assembly, other efforts to secure rights and legal protections for gay and lesbian couples are underway. And a bill to end discrimination based on gender identity and expression will be introduced once again.

Moreover, Del. Dwyer and his homophobic colleagues have, as has been the custom, introduced legislation to enact a constitutional amendment that would define marriage as only between a man and a woman (HB 1345 and SB 169). Other forms of same-sex partner recognition would also be banned in the bill. Experts do not believe that this effort stands much of a chance of making any headway.

Kudos go to Equality Maryland for its organizing Lobby Day and arranging its line-up of distinguished speakers, who, because of the uncomfortable temperatures, kept their remarks brief. The organization deserves much credit and gratitude for setting up a warm sanctuary inside the Senate Building and providing refreshments between legislative appointments.

And praise should also be heaped on the hundreds of lgbt activists and fair-minded allies for supporting the event and enduring the weather conditions to make their voices heard. One participant noted, "It was extremely cold, but I’m glad I was here to put some heat on my legislators."
Posted by Steve Charing at 7:24 PM