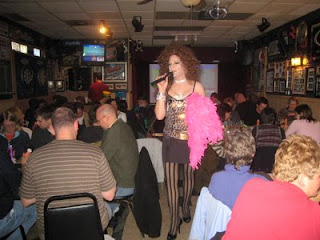 By Steve Charing
There are several characteristics that would describe a successful neighborhood gay bar: diverse crowds, high energy, entertainment, friendly bartenders and staff, tasty affordable food, ample off-street parking, and giving back to the community. It’s clear that PW’s Sports Bar and Grill—situated in a strip mall at Route 1 and Whiskey Bottom Road in North Laurel—fits all of these. Yup, put a check next to each one.
It also happens to be the only gay bar in Howard County. By dint of its centralized location, PW’s is the social center between the bar scenes of Baltimore and Washington, D.C. The ownership takes that role seriously and is involved in a variety of activities that have advanced the visibility of the lgbt community as well as the viability of important lgbt organizations.
"The community has been good to PW’s, and we have tried our best to be good to the community," says John Cook, who is the owner of PW’s.
The bar is divided into two sections. The drinks are made and served in the saloon area. It has several TV’s going usually with a sporting event going on. The other larger rectangular multi-purpose room is a combination dining area, poolroom, cabaret and bingo parlor.
It was in this room that the bar recently held a successful fundraiser for Equality Maryland, the state’s principal lgbt advocacy organization. The place was filled to capacity as "Drag Bingo" was played. Each participant purchased a set of cards for $20, which coincidentally is the prize should you win a game of Postage Stamp, Big O or even Straight Bingo. The numbers were called by "Trixie," the colorful drag star of the evening.
Gay men and women from Baltimore, DC, Glen Burnie, all over Howard County, Bowie and all points in between descended upon PW’s to take part in the evening’s festivities. "I like bingo—it's the only gambling I do—and this was for a good cause," says Ron Hube of Baltimore. "[Trixie] did a great job. And it was fun to watch her get more and more drunk as the evening went on."
While everyone had fun playing the various bingo games and enjoying the campy hostess, the biggest winner was Equality Maryland, which netted $1,100.
PW’s is proud to host fundraisers for other LGBT organizations as well as worthy organizations in the Laurel and Baltimore areas. "We like the idea that members of the community look out for each other like an extended family," says Cook.
In the past 18 months PW’s held fundraisers for Equality Maryland, Breast Cancer Research, The Elizabeth Glaser Pediatric AIDS foundation, LARS (Laurel Advocacy Resource Services, which assists families during time of need), and is planning a fundraiser in the spring for the Howard County chapter of PFLAG –Parents, Families and Friends of Lesbians and Gays.
"Our chapter is the only LGBT organization in Howard County, and PW’s is the county’s only gay bar," says Colette Roberts, the chapter's chairperson. "It makes good sense that we partner together for the benefit of both entities."
PW’s had also sponsored runners in the AIDS Marathon, and donated money to the "No on Prop 8" campaign in California.
The bar has scheduled another fundraiser that will be a combination of raising money for Equality Maryland and taking donations for the ‘Toys for Tots’ program. "We would love to see everybody here on December 20 starting at 8 p.m.," says Cook.
PW’s is active in the LGBT Chesapeake and Potomac softball league by sponsoring two teams. They also field a bowling team in The Capital Area Rainbowlers Association in Laurel. And they sponsor a women’s volleyball team and have donated to a local basketball team –all burnishing the bar’s sports cred and generosity.
If that isn’t enough, PW’s hosts the regular parking lot show by the Straight Eights—a popular antique car club for members of the lgbt community. They meet on the third Sunday each month.
Drag shows are a regular feature at PW’s as they occur on the 2nd Friday of the month. "This is an attraction that brings in lots of straight people from the area," says Scott Gould, who is partnered with John Cook. They feature Miss Gay DC, Miss Gay East Coast, Miss Gay Keystone, as well as others.
Other attractions include Free Pool Play on Wednesdays and Karaoke on Thursdays and Saturdays. And if you are a football enthusiast, Sundays and Monday nights are for you. Each night there is a special drink special going on.
PW’s boasts a diverse, tasty and reasonably priced food menu that includes breakfast, lunch and dinner. It offers healthy choices as well as old time favorites. PW's opens at 6 a.m. How many gay bars can make that claim?
If you are interested in finding out what the latest fundraiser or event is at the bar or which current food or alcohol specials are running, visit their website .
Posted by Steve Charing at 9:47 AM