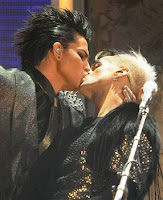 Was Adam Lambert’s performance at the AMA over the top or marketing genius?
By Steve Charing
We’re at the time of the year where we have earned the right to escape, albeit temporarily, from such weighty matters as Afghanistan, the economy, the vitriolic healthcare debate, and how Levi Johnston’s Playgirl photos disappointed. Instead, we will go light and examine the antics (or strategy) of the newest gay centerpiece, Adam Lambert.
As you probably know, the 27 year-old Californian was the runner-up in last year’s American Idol. Throughout the season Lambert mesmerized the audience and judges with his exceptional vocals and his flamboyant appearance (guyliner, sequins, black nail polish, etc.).
He tried to keep a public lid on his sexuality by not directly addressing the question lest homophobia do him in at the contest’s end. He wasn’t very good at that as photos of his kissing other males surfaced on the Internet. By the time the finale rolled around, Lambert was all but out to America. He made it "official" in a Rolling Stone interview following that show.

Alas, Adam lost to the bland but charming "safe" choice, Kris Allen. Although Lambert was arguably the most compelling performer ever to compete in the show’s eight seasons, he lost to Kris due to a combination of reasons with homophobia clearly at the forefront.
On the national tour virtually all the media’s attention and general buzz were directed towards Lambert, not the winner. That says more about the voting process than anything else and how the winner could seem more irrelevant than those contestants who had been eliminated. Case in point: Taylor Hicks the winner, Chris Daughtrey eliminated in Season 5.
At the recent American Music Awards, on the eve of his first release, For Your Entertainment, Lambert’s appearance was hyped throughout the evening until he finally emerged at the end of the otherwise banal show to perform the sexed-up title track from the album. Any lid Lambert attempted to keep on his sexuality during Idol was immediately blown off by a 100-mph wind gust.
With a back-up ensemble of scantily clad dancers of both genders and a clear S&M motif throughout, Lambert, wearing a silvery suit with spikes on his left shoulder led two male dancers by a leash. He simulated oral sex with another dancer, and (gasp!) he kissed his straight male keyboardist right on the lips. Lambert also stumbled on the stage during the number but recovered seamlessly. That stumble, however, was completely overshadowed by the suggestive moves during the song.
The AP reported 1,500 complaints to ABC from viewers over Lambert’s antics, which the network characterized as "moderate." And the network’s Good Morning America cancelled his appearance the next day.
Lambert was taken aback by the fuss.
"It's a shame because I think that there's a double standard going on in the entertainment community right now," Lambert told Rolling Stone after the show. "Female performers have been doing this for years -- pushing the envelope about sexuality -- and the minute a man does it, everybody freaks out. We're in 2009; it's time to take risks, be a little more brave, time to open people's eyes, and if it offends them, then maybe I'm not for them."
Adam Lambert is right on. Back in 2003, Britney Spears, Madonna and Christina Aguilera stuck their tongues in each other's mouths at the MTV awards but didn’t get much protest from the viewers. Women kissing does not elicit the "ewwws" as men kissing does for sure.
And gay men are a whole different category altogether.
In October when straight Mormon Donny Osmond (eventual winner) planted a kiss on the cheek of ABC’s Dancing With the Stars gay judge Bruno Tonioli and suggested more out of the camera’s view in an embrace and a dip, there was no ostensible brushback from the viewers. It was seen as a joke. But when the gay man kisses another guy, the earth falls off its axis.
Lambert performed on CBS’ Late Night with David Letterman three days later. He closed the show with a sterling but non-controversial performance of Whataya Want From Me.
On a night at the AMA that included a flesh-colored bodysuit worn by Lady Gaga, a total of 29 crotch-grabs from Janet Jackson and a duet from Eminem and 50 Cent that had virtually every other lyric bleeped, the gay man was the villain. Adam Lambert raised the ire of the public and caused the only backlash.
That tells you all you need to know about where we stand in America. But having this controversy and its attendant buzz right before the release of his album will serve Adam well as far as sales are concerned. And as he demonstrated on Letterman, he knows how to tone it down when he needs to. Adam Lambert is a star.
Photo: Courtesy of Kevork Djaansezian/Getty images
http://www.stevecharing.blogspot.com/.
Posted by Steve Charing at 3:39 PM