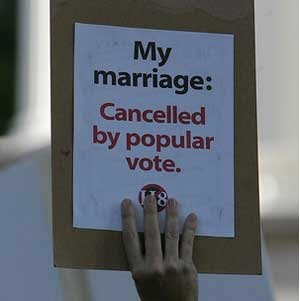 We are not ready for marriage equality to be won at the ballot box.
By Steve Charing
When Proposition 8 succeeded in California a year ago there was legitimate outrage throughout gay nation. How can justice and equality fail in a blue state that went overwhelmingly for the first ever African-American president? With all the time to prepare for the battle, how did LGBT leaders manage to snatch defeat from the jaws of victory?
Blame was quickly affixed to African-American voters, the Mormon Church, senior citizens, and a failure by LGBT Prop 8 to effectively reach out to non-traditional supporters. With varying degrees, all of these factors led to a dismal outcome.
Then came Maine’s Question 1 on November 3. Maine is a state with strong independent tendencies, a blue state with the only two moderate Republicans remaining in the Senate, and marriage equality already in place throughout New England except Rhode Island.
There weren’t enough black voters in Maine to scapegoat this time. The Mormon influence was not as dominating. And our side raised far more money than the opposition. We still managed to lose by six percent.
When we put two and two together, this time the answer is zero. Two blue states, two ballot measures, results the same: failure.
In some ways the results in California and Maine could have been reversed had we been able to offset the scare tactics. Opponents of marriage equality used their money to effectively instill fear by lying with scary messages about same-sex marriage and its influence on children. They succeeded in convincing the electorate that "defining" marriage should not be left up to "activist" judges. And, of course, the convenience of cherry-picked Scripture always comes in handy during these battles.
But we haven’t found that shield against such smear jobs, and until we do, we cannot win by referendum.
A well-known political axiom that had its roots in Plato’s Republic states you should not put a minority’s rights in the hands of the tyranny of the majority. People vote by emotion, and if submitted to a vote, we would still have segregation, racial discrimination and a ban of interracial marriage in the U.S. While in some cases gay rights succeeded by referendum as in the case of Washington State, same-sex marriage, as has been demonstrated now in 31 states, is a non-starter among the voters.
On this issue we must avoid such ballot measures lest we continue to fail. There are far more motivated straight people voting against us than lgbt folks and allies can turn out. It’s a numbers game, and we don’t yet have the numbers. And we haven’t found an effective answer to the lies.
In Maryland, we have successfully fought off such ballot initiatives ever since same-sex marriage has been thrust onto the agenda by way of the Massachusetts ruling in 2003. It’s easier to stonewall here because same-sex marriage is not on the books. In fact, our Constitution defines marriage to be a union between a man and a woman. Therefore, elected officials do not see the imperative for a constitutional amendment, which would then be up for the voters to decide.
Instead, we try to win over legislators with the hope our governor signs marriage equality into law. That has not happened yet, and it will be years away from such an eventuality. But if it did, a more powerful effort will be made to undo the actions of the legislature and the governor by pushing the issue to the voters.
For proponents of same-sex marriage, that should be our greatest fear. Maryland is a blue state, as is California and Maine. And put to a vote, we’d fail, too, unless our stories are told rather than the lies promulgated by our opponents.
That’s where we all have a role. We need to get OUR message out to the voters because our arguments are legitimate and truthful.
http://www.stevecharing.blogspot.com/.
Posted by Steve Charing at 11:28 PM