Same-sex marriages have only strenthened the institution 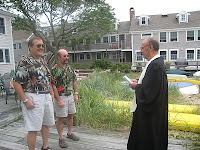 Letter appearing in the March 11, 2010 issue of the Howard County Times/Columbia Flier:


Bravo to Diane Brown for her perceptive column on the comparison of the historical battle for interracial marriages with the current struggle for same-sex marriage (“Racial restrictions on marriage seem silly now; same-sex bans will too,” March 4)!

Maryland Attorney Douglas Gansler’s legal opinion whereby the state can recognize the lawful marriages of same-sex couples performed in other jurisdictions was most welcome and is a good first step towards achieving marriage equality in the Free State.

In anticipation of this historic opinion, we decided to celebrate our 30 years together and get married in a civil ceremony in Massachusetts last summer. Massachusetts, as you know, was the first state in the U.S. to legalize same-sex marriage in 2004. Despite the fiery reaction from religious conservatives warning that the institution of marriage would be ruined as a result, we find that the institution was only strengthened when same-sex couples’ unions were recognized by the state’s government. Massachusetts maintains its ranking of having the lowest divorce rate in the U.S., and that rate actually further declined since 2004.

People should understand that the union of loving, committed same-sex couples recognized by the government is not a threat to marriage. Divorce, adultery, poverty, domestic violence, drug and alcohol abuse and children born out of wedlock are the real threats to the institution of marriage.

When we returned from Massachusetts to announce the news, all our straight neighbors and friends embraced our decision to become a family, shared in our joy and wished us the best in the future together. The support we received was extremely warm and sincere, and quite surprising, given the amount of effort spent by opponents of marriage equality to instill fear in the public. They didn’t bemoan this event or see their own marriages in jeopardy as a result. They understood that love is love, and that’s the way it should be.

Now with Mr. Gansler’s opinion, we can receive the same rights, benefits and responsibilities conferred on other couples in Maryland with the hope that in the near future same-sex couples would not have to leave the state to have their love and commitment recognized by the government.